An international team of researchers, including scientists from the Royal Tyrrell Museum, the University of Alberta (Canada), the University of Cincinnati (USA), Hobetsu Museum and Fukuoka University (Japan), have announced the discovery of a new species of Mosasaur found in Upper Cretaceous rocks in Japan.  This three metre long predator may have specialised in hunting in deep water or perhaps it evolved to fill a specific ecological niche, that of a night hunter preying on bioluminescent fish and squid. Growing to around the size of an extant American Alligator (C. mississippiensis), this large-eyed Mosasaur from the island of Hokkaido (northern Japan), was probably most closely related to another species of Late Cretaceous Mosasaur, but one from Belgium thousands of miles away (P. ortliebi).  This fossil find, consisting of beautifully preserved cranial material plus some post cranial elements, will help palaeontologists to build a better understanding of the biogeographical distribution of certain types of Mosasaur towards the end of the Mesozoic.

In 2009, scientist Tomohiro Nishimura (Hobetsu Museum), recovered a calcareous nodule from one of the tributaries of the Pankerusano-sawa Creek, about 3 miles east of the town of Hobetsu.  The rivers in this part of Hokkaido cut through sandstones which were laid down at the very end of the Age of Dinosaurs (Hakobuchi Formation of the uppermost Yezo Group), the fossil is believed to have come from the lowermost strata representing the early part of the Maastrichtian age, approximately 71 million years ago.

Mosasaur Creek!  The Rivers Cut Through the Loosely Compacted Sandstones The picture above shows the topography of the area.  Shallow soils overlie sandstones and the action of rivers results in deep channels being cut in the rock which can expose fossils such as ammonites and occasionally the fossilised bones of marine vertebrates.

Views of the Remarkably Well-Preserved Skull 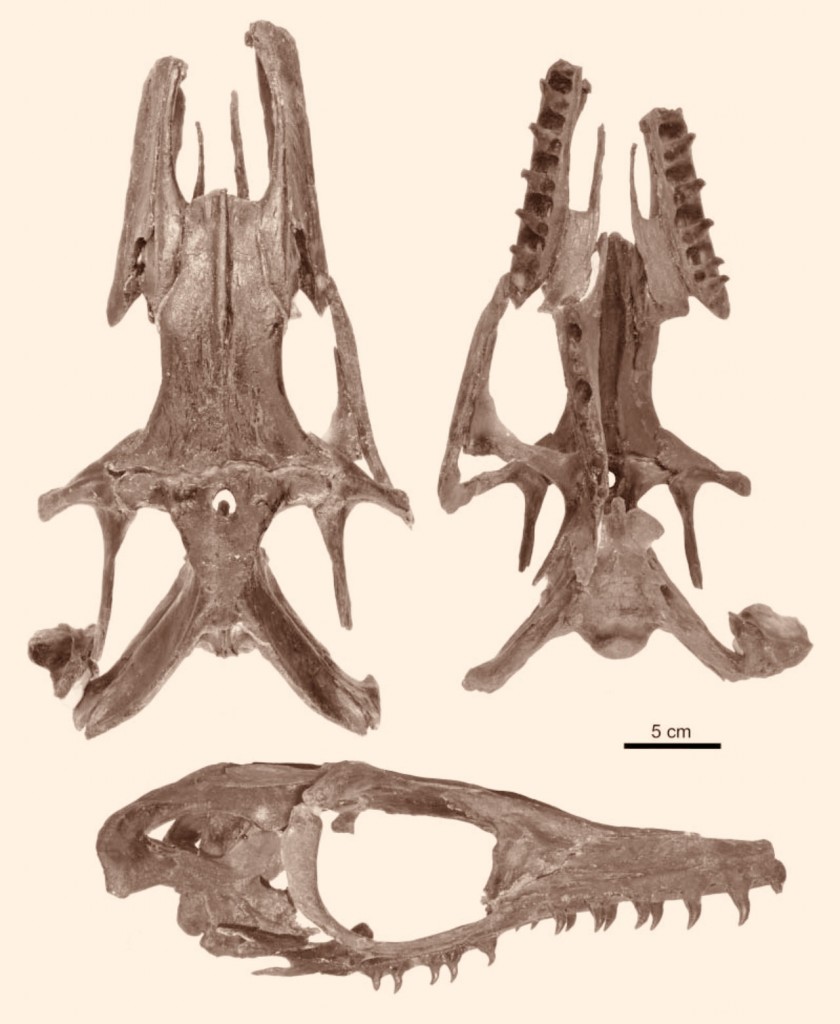 Phosphorosaurus ponpetelegans  means “phosphorus lizard from an elegant creek”,  co-existed with much larger Mosasaurs, ten-metre plus monsters that were the apex predators.  The scientists propose that P. ponpetelegans adapted to an ecological niche, that of a night time predator or perhaps a deep water hunter.  The almost complete skull was slowly removed from its rocky matrix by being placed in a bath of dilute acid each night.  Once the skull bones had been freed from the rock, the researchers set about piecing the skull together.

This marine reptile had huge eye sockets and a reduced snout when compared to other Mosasaurs.  As the fossil skull was so well preserved the scientists have been able to determine that Phosphorosaurus ponpetelegans had binocular vision, its eyes were located on the front of its face, providing depth perception.  Most other Mosasaurs have eyes towards the side of their heads.  This gives them a large, all round field of view but they lack the depth perception to the extent demonstrated by a study of Phosphorosaurus cranial material. The skull in lateral view showing the huge eye-socket.

Commenting on the significance of the size and position of the eyes, lead author Takuya Konishi explained:

“The forward-facing eyes on Phosphorosaurus provide depth perception to vision, and it’s common in birds of prey and other predatory mammals that dwell among us today.  But we knew already that most Mosasaurs were pursuit predators based on what we know they preyed upon — swimming animals.  Paradoxically, these small Mosasaurs like Phosphorosaurus were not as adept swimmers as their larger contemporaries because their flippers and tail fins were not as well developed.”

The researchers depict Phosphorosaurus has a nocturnal hunter, although the pursuit of prey in deeper water cannot be ruled out.  Phosphorosaurus could be thought of as an owl, whereas the diurnal, larger, more streamlined Mosasaurs in the ecosystem were the equivalent of day time hunters such as hawks and eagles.  The binocular vision in nocturnal animals doubles the number of photoreceptors to detect light.  Just like an extant owl, this small Mosasaur had very large eye sockets.

A Comparison of the Binocular Vision Potential of Different Mosasaurs The forward facing vision of Mosasaurs are compared.

Picture Credit: The Journal of Systematic Palaeontology with additional notation by Everything Dinosaur

In the line drawing above, the field of vision of Phosphorosaurus ponpetelegans (c) is compared to two other Mosasaurs.  The skulls are drawn not to scale.  Plotosaurus bennisoni (a) was a much larger, more streamlined Mosasaur.  Its fossils come from Upper Cretaceous rocks found in California.  It grew to lengths in excess of twelve metres and it was very probably an open ocean predator relying on its pursuit speed to catch its prey, which probably included other Mosasaurs and marine reptiles.  The binocular field of vision for the long-snouted Plotosaurus bennisoni has been calculated to around 22 degrees.  Mosasaurus missouriensis (b)was also a large, apex predator.  Size estimates vary, but this Mosasaur, whose fossils come from North America, could have been four times the size of Phosphorosaurus.  It too, was an ocean going predator, but it is depicted as being more bulky and therefore less streamlined than Plotosaurus.  Its binocular field of vision has been calculated at around 29 degrees.  In contrast, the much smaller, shorter snouted Phosphorosaurus with its forward facing and proportionately much larger eyes had a binocular field of vision of around 35 degrees.

Numerous fossils of Cephalopods such as squid and ammonites have been recovered from the same strata as the Phosphorosaurus fossil remains.  In addition, fossils of ancient lantern fish have also been found.  The scientists speculate that this Mosasaur may have hunted the bioluminescent fish and squid at night, whilst larger Mosasaurs in the area hunted during the day.

“If this new Mosasaur was a sit-and-wait hunter in the darkness of the sea and able to detect the light of these other animals, that would have been the perfect niche to co-exist with the more established Mosasaurs.”

Such is the exquisite quality of the preserved skull, that the researchers hope to be able to piece together more details concerning the evolution and radiation of the Mosasaur group as a whole.  Phosphorosaurus has been assigned to the Halisaurinae Sub-family of Mosasaurs.  Its discovery will help to fill the gap between similar types of Mosasaur fossils found in Europe and the Middle East and those from the Eastern Pacific. The distribution of the Halisaurine Mosasaurs (Late Cretaceous).

Picture Credit: Journal of Systematic Palaeontology with additional notation by Everything Dinosaur

The red mark indicates the Phosphorosaurus ponpetelegans fossil location.  It is the most northerly Halisaurine Mosasaur discovered to date. The curved and widely spaced teeth support the idea that this Mosasaur hunted squid.