The Top Five Most Popular Prehistoric Animals of 2014

Today, we continue our rundown of the most popular prehistoric animals as compiled by all the data sources available to Everything Dinosaur team members.  We have already published information on numbers ten to six, now it is time to look at the top five.

To see the first part of the countdown: Everything Dinosaur’s Top Ten of Prehistoric Animals 2014 (Part 1).

A faller from last year, when it hit an all time high at number two, is Spinosaurus.  We received a lot of enquiries about this dinosaur when the new interpretation of this piscivore was published back in September .  This secured this huge reptile’s position in our top five.  The scientific paper which re-examined the Spinosaurus fossil material was published in the journal “Science”.  It was one of the most eagerly awaited papers of the year.  The review interpreted Spinosaurus as an obligate quadruped, in essence, here was an enormous dinosaur that walked on all fours.

To read Everything Dinosaur’s blog article about the new interpretation of Spinosaurus aegyptiacus: Spinosaurus – Four Legs are Better than Two.

2014 Saw a New Interpretation of Spinosaurus 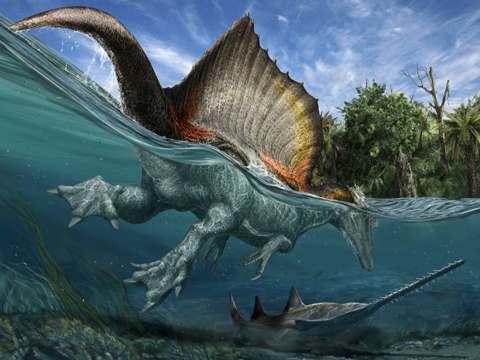 Very much at home in the water.

A perennial favourite, especially amongst the girls, is the plated dinosaur Stegosaurus.  Everything Dinosaur received a constant stream of Stegosaurus themed questions and enquiries over the last twelve months or so.  The interest in this Late Jurassic herbivore peaked when the new Stegosaurus exhibit at the Natural History Museum (London) was unveiled.  We even invited a young dinosaur fan (thanks Milan), to blog about this Stegosaurus (S. stenops) specimen, which is affectionately known as “Sophie”.

Stegosaurus Popular with the Girls A posterior view of the spectacular “Sophie” the Stegosaurus (S. stenops” exhibit at the London Natural History Museum.

Picture credit: Courtesy of the Natural History Museum and chosen by Milan

Everything Dinosaur confidently predicts that the research project currently being undertaken at the Natural History Museum will yield some very interesting information about stegosaurs.

A non-mover at number three and the only representative of the horned dinosaurs in our top ten countdown is Triceratops.  It is ironic that “three horned face” remains at number three in our countdown of the ten most popular prehistoric animals of 2014.  This dinosaur is popular with both boys and girls and with the introduction of the Papo baby Triceratops replica in August, sales of Triceratops models were given a boost. A number of scientific papers detailing research into the Ceratopsidae were published this year.  Almost without fail, Triceratops got a mention somewhere.  Despite the increase in centrosaurine and chasmosaurine dinosaurs, Triceratops remains very much the best known of all the horned dinosaurs.  There was some research published in 2014 dedicated to the Triceratops genus itself.  In July, Everything Dinosaur reported upon some fascinating research that looked at how Triceratops species evolved over the course of the latter stages of the Late Cretaceous.

Up two places from last year and into the runners up spot comes Velociraptor, a rapid rise for the “speedy bird of prey”.  A short clip from the “Jurassic World” trailer showing Chris Pratt on a motorbike leading his posse of trained Velociraptors got tongues wagging and we were contacted about this by a lot of other bloggers as well as media correspondents.  Could Velociraptors be trained?  Would there be a “raptor show” in the “Jurassic World” theme park?  These are the sort of questions we were asked.  As with all the questions we get asked, we did our best to answer them using our knowledge of the Dromaeosauridae.  After all, if parrots can be trained to ride bicycles then why not train a Velociraptor to follow a motorbike?

Velociraptors feature in the forthcoming movie.

Before we reveal our number one, a few honourable mentions for those prehistoric animals not quite in our top ten.  Pachyrhinosaurus (horned dinosaur), Dolichorhynchops and Ichthyosaurus (marine reptiles), Smilodon (Sabre-toothed cat), Yutyrannus (Early Cretaceous tyrannosaurid) and the pterosaur Pteranodon.

Remaining at number one and it seems more popular than ever is Tyrannosaurus rex.  Interestingly, the “King of the Tyrant Lizards”, got a boost in popularity due to the increasing number of new types of tyrannosaurid that have been described over the last two years or so.  As more research is published on dinosaurs such as Yutyrannus and Lythronax argestes, so just like Triceratops placed at number 3, T. rex tends to get a mention in the text and this leads to more questions being asked at Everything Dinosaur. There is a “knock on” effect that benefits Triceratops to some extent but T. rex benefits more.   Tyrannosaurus rex is such an iconic animal that it manages to get a look in even when the initial subject matter has nothing to do with it.  For example, the book, “Dinosaurs of the British Isles” features information on T. rex even though no Tyrannosaurus rex as far as we know, ever lived anywhere else except North America.  A T. rex is very likely to be seen in “Jurassic World” so we confidently predict this apex predator is going to be number one next year as well.

The introduction of a new Tyrannosaurus rex model by Schleich helped T. rex dinosaur sales as did the spectacular Rebor KING T-REX 1:35 scale replica which came out in early December. To read the article about the Rebor KING T-REX: Putting the “King” into the Tyrant Lizard.

To view the extensive range of Rebor models and figures: Rebor Models and Figures.

So there you have it, we complete our blog articles for 2014 by finishing off our top ten countdown of the most popular prehistoric animals.