Walking with Dinosaurs in 3-D in Cinemas Today

Cinema goes back to the Late Cretaceous

The long awaited “Walking with Dinosaurs” film is released in the UK today.  No doubt it will prove to be  a “monster” hit with dinosaur fans of all ages.  The story is set in the Late Cretaceous of North America and centres on the adventures or a horned dinosaur called “Patchi” and his friends.  “Patchi” is a Pachyrhinosaurus, the genus of horned dinosaur has currently got three species ascribed to it.  Everything Dinosaur team members think that the particular species of pachyrhinosaur featured in the film is Pachyrhinosaurus canadensis.

To learn a little more about the different species of Pachyrhinosaurus: Step Forward the Pachyrhinosaurs – Stars of a Dinosaur Film.

Commenting on the film, which is shot in 3-D, a spokesperson from Everything Dinosaur stated:

“This new movie will introduce cinema goers to a whole new range of dinosaurs and prehistoric animals, quite a few of which they will not have heard of before.  For example,  many people may be familiar with the horned dinosaur called Triceratops but not many will be aware of the large number of horned dinosaur species that are now known to have existed during the Late Cretaceous of North America.  The film will also feature a number of dinosaurs with feathers.”

The story unfolds from the point of view of Alex the “Alexornis”, a primitive bird who tells the story of “Patchi”, a baby Pachyrhinosaurus and his adventures when he becomes separated from the protection of his herd.   Life is tough for a young, vulnerable pachyrhinosaur with marauding troodontids, the fleet-footed Hesperonychus (a dromaeosaurid) and sharp-beaked pterosaurs ready to snatch up the youngster.  A number of dinosaur models have been made that represent the prehistoric animals seen in the film.  Walking with dinosaurs dinosaur models are certainly big business.

Walking with Dinosaurs in 3-D 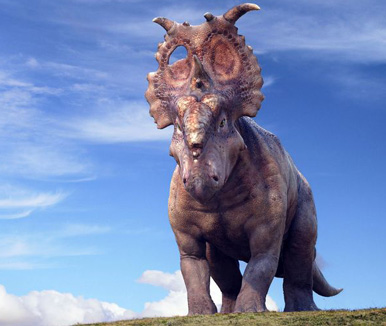 The film makers are to be congratulated for providing such a rich and diverse cast of characters, accurately reflecting a Late Cretaceous (Maastrichtian faunal stage) ecosystem.  Over the last few years palaeontologists have uncovered some remarkable fossil finds that have formed the basis for the animals in this story.  For instance, fossils found in Alaska indicate that herds of herbivorous dinosaurs very probably undertook seasonal migrations in search of better grazing or favourite nesting sites.  The Pachyrhinosaurs and other large herbivorous dinosaurs are shown in the movie migrating.  Naturally, where the herbivores go the apex predators follow and the chief villain of the piece is Gorgosaurus, a member of the tyrannosaur family. Gorgosaurus may not have been quite as big as its famous relative Tyrannosaurus rex but at over eight metres in length it was a formidable hunter, quite capable of tackling an unwary Pachyrhinosaurus.

Although there is much to admire in this new dinosaur film, it also, unwittingly portrays a problem with palaeontology.  We at Everything Dinosaur describe the science of palaeontology as being a bit like Easter – it’s a moveable feast.  New discoveries change the way we view prehistoric animals and one of the herbivores seen in this film (Edmontosaurus)  is already in need of a make over.  The three main protagonists, the pachyrhinosaurs known as “Juniper”, “Scowler” and “Patchi”, once separated from their own herd, join up with a migrating group of edmontosaurs and head off once again to find new feeding grounds.  The edmontosaurs depicted in the movie, show a lot of anatomical detail, however, a recent dinosaur discovery has revealed that at least one species E. regalis may have sported a soft tissue crest, almost like the comb seen on a rooster.

The Edmontosaurs as Seen in the New Dinosaur Film In future this dinosaur could sport a comb-like structure on its head.

That’s the trouble with palaeontology, new fossil finds can re-write what we know and future depictions of Edmontosaurus on the big screen could portray this huge herbivore with a comb of soft tissue on its head.

To read more about latest interpretation of Edmontosaurus: Duck-billed dinosaur with a comb like a rooster.

Neil Nightingale, Creative Director of BBC Earth, which is behind the project, has directed “Walking with Dinosaurs in 3-D”, in conjunction with animator Barry Cook, who can count Disney’s “Mulan” as one of his previous credits. Neil hopes that this film, released in time for the Christmas holidays is going to educate as well as entertain.  As for the future direction of the “Walking with” franchise, Mr Nightingale will not be drawn on whether a sequel is in the pipeline but did comment in a recent interview that “we’ve got lots of great ideas lined up.”

With the best part of 160 million years of the “Age of Dinosaurs” to explore plus the inducement of representing dinosaurs as new fossil evidence is uncovered, we think that there could well be a “Walking with Dinosaurs in 3-D (Part 2)”, coming to a cinema screen near you in a couple of years time.