An international team of scientists from Brazil and Argentina in collaboration with a geochronologist from the Massachusetts Institute of Technology (MIT), have provided evidence to support the hypothesis that the Ornithischia and Saurischia diverged early on in dinosaur evolution and this supports the view of the dinosaur family tree as proposed by Seeley in 1887.

Writing in the journal “Scientific Reports”, the researchers which included Jahandar Ramezani (MIT), re-examined the fossils of Pisanosaurus mertii, dating these fossils to approximately 229 million years ago (Late Carnian stage of the Triassic).  Pisanosaurus is believed to be the earliest known ornithischian dinosaur, although some palaeontologists have concluded that this one-metre-long reptile is a dinosauriform.  This new date suggests that bird-hipped dinosaurs were evolving at around the same as lizard-hipped forms (Saurischia), this challenges the hypothesis proposed by Baron et al in their 2017 paper which re-shaped the traditional view of dinosaur taxonomy.

To read more about the 2017 scientific paper: Root and Branch Reform of the Dinosaur Family Tree.

A View of the Ischigualasto Formation (Foreground) The famous Ischigualasto Formation (foreground), the Sierra de Famattina Mountains can be seen on the horizon (La Rioja province – Argentina).

The researchers focused their fossil finding efforts on the Hoyado del Cerro Las Lajas area, where outcrops of the Ischigualasto Formation can be found, but they are less well explored compared to contemporaneous strata within the “Valley of the Moon” geological park in San Juan Province.  Volcanic deposits yielded zircons at various levels and these minerals permitted the measurement of isotopes of uranium and lead (rate of radiometric decay).  The presence of these igneous rocks allowed the geochronologist to measure the relative proportion of isotopes present in the zircon crystals.  Radiometric dating permitted the scientists to make an estimate of the age of the bedding planes and infer the age of the fossils that they contain.  The study revealed that the Ischigualasto Formation overlaps with the deposition of another important fossil-bearing formation found in North America – the Chinle Formation.

Carefully Jacketing a Specimen Prior to its Removal 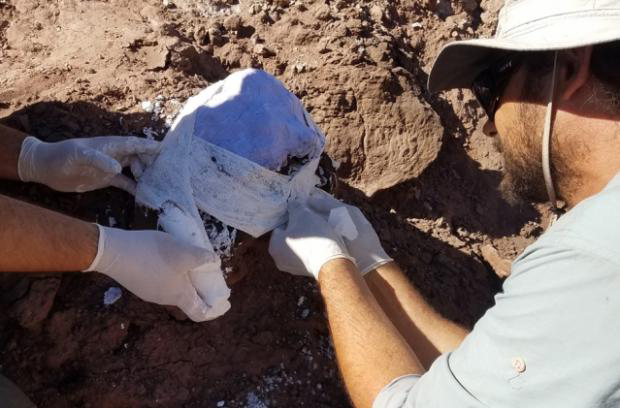 A researcher carefully prepares a field specimen for removal.

Overlapping with the Chinle Formation of the South-western United States

The middle layers of the Chinle Formation which outcrops in the south-western part of the USA contain a variety of vertebrate fossils, including early dinosaurs.  However, very few fossils if any, are associated with the lower levels of the Chinle Formation.   The lack for fossils, prevents palaeontologists from understanding more about the early radiation and diversity of the Dinosauria from their suspected origins in the southern hemisphere.  The rocks from which fossils of the  basal ornithischian dinosaur Pisanosaurus have been found were dated to approximately 229 million years ago.  From this data, the research team were able to conclude that the earliest bird-hipped dinosaurs evolved at around the same time as the first lizard-hipped dinosaurs appear in the fossil record. A life reconstruction of the Triassic ornithischian Pisanosaurus.

Commenting on the contribution of the dating of the strata to the paper, Jahandar Ramezani stated:

“We can now say the earliest ornithiscians first showed up in the fossil record roughly around the same time as the saurischians, so we shouldn’t throw away the conventional family tree.  There are all these debates about where dinosaurs appeared, how they diversified, what the family tree looked like.  A lot of those questions are tied to geochronology, so we need really good, robust age constraints to help answer these questions.” Microscopic crystals of the uranium-bearing mineral zircon were identified in rock samples and these crystals permitted an accurate date for the rock layers to be calculated.

Everything Dinosaur acknowledges the assistance of a media release from the Earth, Atmospheric and Planetary Sciences department of MIT in the compilation of this article