A Video Review of the new for 2020 PNSO “Wilson” T. rex Dinosaur Model

Everything Dinosaur team members have been busy in the studio producing a YouTube video review of the new for 2020 “Wilson” the Tyrannosaurus rex dinosaur model from PNSO.  This new, free-standing replica replaces the original “Wilson” T. rex figure from PNSO and Everything Dinosaur took the opportunity to compare and contrast these two models.

In Everything Dinosaur’s short video review (the YouTube video lasts 9:43), the new 2020 Tyrannosaurus rex model is introduced and the articulated jaw is demonstrated and commented upon.  The beautifully detailed head of the theropod dinosaur is discussed and the bony crests over the eyes highlighted.  These crests may have served a variety of functions, helping to protect the eyes during intraspecific combat or whilst attacking prey, shading the eyes and helping T. rex to see in bright, sunny conditions and the potential role in visual communication.  The video narrator provides further information and explains some of the science behind the interpretation of the tyrannosaur skull morphology.

A Closer View of the Head of the New for 2020 PNSO “Wilson” T. rex Dinosaur Model 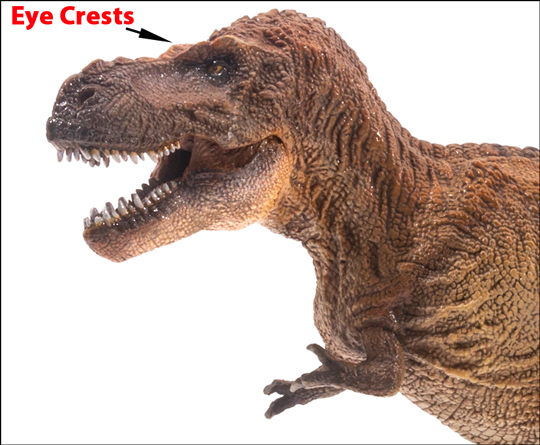 To view “Wilson” and all the other PNSO prehistoric animal figures available from Everything Dinosaur: PNSO Age of Dinosaurs Models and Figures.

Looking at the Packaging and Artwork

The video examines the dinosaur model in detail, but also provides information on how the packaging and box contents between the first “Wilson” figure produced by PNSO and this new version has changed.  The 2020 figure is presented in a beautiful box adorned with the artwork of Zhao Chuang one of the co-founders of PNSO.  The video also looks at the product leaflet that accompanies the model and comments on the contribution of Yang Yang, the other co-founder of this Chinese company.

The Box Art is Commented Upon in the Video Review Comparing the 2020 “Wilson” with the Original PNSO Model

The video review also permits Everything Dinosaur team members to compare the new figure from PNSO with the earlier Tyrannosaurus rex “Wilson” model, the figure that was supplied with a base.  In the video, we demonstrate how to convert the new for 2020 model so that it can be displayed on the base which was provided with version 1.