The Chilesaurus Scale Drawing Commissioned by Everything Dinosaur 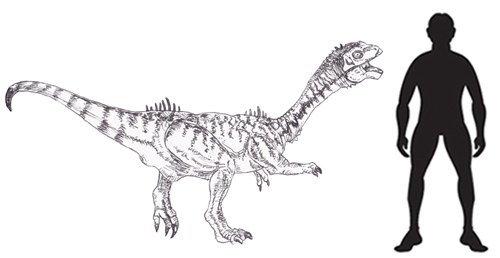 A scale drawing of the bizarre Late Jurassic dinosaur Chilesaurus.

The Chilesaurus and the controversial Giganotosaurus are due to arrive first, with the Stygimoloch following a few weeks later. The new Papo Parasaurolophus and feathered Velociraptor colour variants are now scheduled for an early autumn release, although we do stress, that this itinerary is liable to change.

To view the range of Papo dinosaurs and prehistoric animal figures available from Everything Dinosaur: Papo Dinosaur and Prehistoric Animal Figures. This bizarre dinosaur, when first formally named and described (2015), was regarded as a tetanuran theropod.  The tetanurans are the largest clade of theropod dinosaurs and include all members of the Theropoda more closely related to modern birds than they are to Ceratosaurus.  Chilesaurus demonstrated a highly unusual combination of anatomical characteristics that could be interpreted within phylogenetic studies in numerous ways, depending on the data set used.  Following a controversial scientific paper published in 2017 entitled  “A New Hypothesis of Dinosaur Relationships and Early Dinosaur Evolution”, written by Matthew Baron and David Norman (Cambridge University) along with Paul M. Barrett (London Natural History Museum), this little biped has taken up a prominent position within Dinosauria research.

A paper published a few months after the controversial publication that challenged the traditional view of dinosaur classification, suggested that Chilesaurus with its strange suite of features, was not a theropod at all.  It was suggested that it was the earliest diverging member of the Ornithischia.  It was proposed that Chilesaurus was a “transitional taxon”, bridging the morphological gap between the Theropoda and the Ornithischia.

This little, unassuming dinosaur might just prove to be one of the most significant dinosaur discoveries of the 21st Century. The Papo Chilesaurus dinosaur model (available in the next few weeks from Everything Dinosaur).