Everything Dinosaur’s Palaeontology Predictions for 2020

Just for a little bit of fun, team members at Everything Dinosaur have been taking a look into their crystal balls to see if they can predict some of the news stories and other articles that we will feature on this blog site over the coming twelve months or so.  Proposals have been brought forward, we have discussed and debated and come up with a list of our predictions for what we think will be covered in our next 365 or so blog posts.

Here are our attempts at second guessing what news stories will be covered on this site.  At the end of 2020, we will take a look back to see how we have done.

1).  A new Dinosaur Named from Thailand

Last year we predicted that a new dinosaur would be named and described from fossil discoveries made in India.  We drew a blank on that one, we did not report any new genera from India being erected, so, this time we will predict that a new dinosaur will be discovered in Thailand, perhaps a basal ornithopod or a member of the Theropoda.   Last year we reported upon the discovery of two meat-eating dinosaurs from Thailand (Phuwiangvenator yaemniyomi and Vayuraptor nongbualamphuensis), in previous years we have blogged about the discovery of the remains of a huge sauropod.  Dinosaur fossils from Thailand are rare, but we will stick our collective necks out and predict a new dinosaur from this part of south-east Asia.

Will a New Theropod Dinosaur be Named in 2020 from Fossils Found in Thailand? A new genus of theropod dinosaur to be named from fossil discoveries made in Thailand?

2).  Everything Dinosaur to be Awarded Feefo Platinum Award for Customer Service

The independent ratings company Feefo will introduce a new top standard of customer service in 2020.  The Feefo Platinum Trusted Service award recognises those businesses that go above and beyond to provide a consistently high level of customer service all the time.  This is the highest service recognition that Feefo has ever offered, will Everything Dinosaur achieve these exacting standards.  Our team members are going to do their best, if we continue to put our customers front and centre then we predict that Everything Dinosaur will achieve this standard in the next twelve months.

Everything Dinosaur Has Earned the Feefo Gold Standard for Customer Service but in 2020 Can We Do Better? 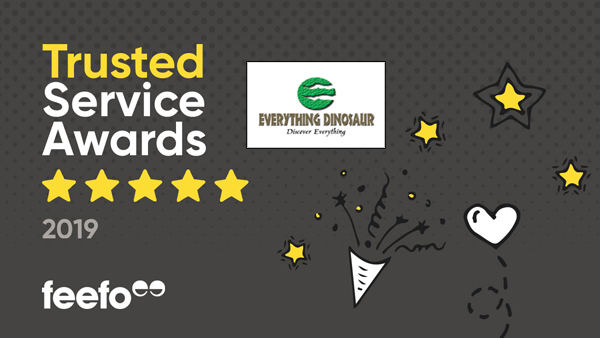 A 26o hectare site in Wyoming (United States), will continue to astonish scientists with the wealth of Late Jurassic fossil material that it contains.  We predict that Everything Dinosaur will report on more discoveries from this remarkable site.  The location will be opened again in the spring and the joint Dutch, American and British research team will be adding to their discoveries shortly afterwards.  Expect more news of sauropods, fossil flora and dinosaur tracks, with theropods and stegosaurs thrown into the mix too.  It is the Children’s Museum of Indianapolis that is leading the research, we predict more news from them and sadly, the first reports of illegal fossil gathering from the site.

Professor Phil Manning (University of Manchester) at the “Jurassic Mile” Professor Phil Manning (The University of Manchester) poses next to a diplodocid femur.

4).  The Anthropocene and our Carbon Footprint

Climate change will dominate the news in the coming years.  Everything Dinosaur team members predict that the Anthropocene, the proposed, new geological epoch dating from the commencement of significant human impact on Earth’s geology and ecosystems will be thrown into sharp focus this year.  Research will be published that contrasts the sudden rise in greenhouse gases with what is known about global warming from ancient palaeoclimates.  In 2019, Everything Dinosaur developed an environmental and ethical trading policy.  We will continue to do our part by increasing the amount of recycled packing materials we use, cutting out waste, increasing the amount of material recycled and reducing our use or electricity.  We have a number of initiatives in place to help make our company more environmentally friendly including supporting the restoration of natural habitats.  We predict blog posts will focus on the environmental emergency and that links will be made to previous climate change events recorded by scientists.  The concept of a sixth mass extinction event as recorded in the Phanerozoic will be reported upon in this weblog.

Expecting the Anthropocene to Make Headlines in 2020 Climate change, time is running out, changes in human activity need to be made.

5).  Everything Dinosaur to add an Additional Fifty Models

This year is going to be yet another very busy one for Everything Dinosaur.  The range of models and figures that we currently supply is vast but just as last year we predict that at least fifty new replicas and figures will be added to our range over the next twelve months.  We have already made exclusive announcements about CollectA models and Papo, expect more news about new products in the coming months.  Fifty new models works out at around one new model every 175 hours!

New Models for 2020 in Stock at Everything Dinosaur Everything Dinosaur expects to stock a lot of new prehistoric animal figures in 2020.  Expect new models from Rebor, Beasts of the Mesozoic, CollectA, Safari Ltd and Papo in 2020.

Expect the hyperbole regarding the sixth instalment of the “Jurassic Park/World” movie franchise to build over the next twelve months.  The first teaser trailers are likely to be released soon, perhaps airing first in the USA during the commercials surrounding the Super Bowl in early February.  An announcement has already been made about the original stars of the 1993 film “Jurassic Park”, joining the cast and reprising their roles for the new film.  “Jurassic World 3” is due for release in 2021 and will be directed by Colin Trevorrow.

Stars of the Original Film will Feature in “Jurassic World 3” Sam Neill, Laura Dern and Jeff Goldblum will reprise their roles.  However, Gennaro (pictured far left), played by Martin Ferrero, is not going to return, his part in the franchise was ended by a hungry T. rex.

7).  Picking Up a Prehistoric Penguin

Last but not least comes our prediction that sometime over the next twelve months or so a scientific paper will be published that describes a new species of prehistoric penguin.  Lots of different types of prehistoric birds are going to be named and described in 2020.  We can expect new discoveries from China, the United States and possibly Antarctica.  However, Everything Dinosaur team members predict that a scientific paper will be published naming and describing a new species of penguin, perhaps a recent Pleistocene species or an early member of the Sphenisciformes Order.  New Zealand has proved to be a successful hunting ground for fossils of early penguins so we predict that the fossil discoveries will come from that country.

To read a recent article about the fossils of a giant penguin: Monster Penguin from the Southern Hemisphere.

So, we have made seven predictions about news stories and other articles that we will feature on this blog site over the coming year.  In twelve months’ time, we will look back to see how we have got on.