Aquilarhinus palimentus from the Early Campanian of Texas

Researchers writing in the “Journal of Systematic Palaeontology” have announced the discovery of a new species of duck-billed dinosaur (hadrosaurid), although this dinosaur possessed a very peculiar “duck-bill”.  The dinosaur named Aquilarhinus palimentus, seems to have had a shovel-shaped beak, suggesting that it had a unique way of feeding.   The front of the jaws of duck-billed dinosaurs meet in a U-shape to support a cupped beak used for cropping vegetation.  Aquilarhinus was different, analysis of the front of the lower jaw (anterior portion of the dentary), indicate that the jaws of this plant-eater met in a strange W-shape, creating a wide, flattened shovel. In 1985, Tom Lehman, then a geology master’s student at the University of Texas was exploring Upper Cretaceous-aged outcrops in south-western Texas.  Whilst working on the western side of Rattlesnake Mountain, which is in the Big Bend National Park, he and his fellow field team members came across some badly weathered dinosaur fossil bones cemented together in an ironstone nodule.  For some years, the material remained in storage, a preliminary study of the skull material back in the 1990s identified a broad nasal crest and it was thought that this dinosaur was related to Gryposaurus.  This new research has identified a number of unique anatomical characteristics that merit these fossil bones being placed in their own genus.  Furthermore, Aquilarhinus was a more primitive hadrosaurid then Gryposaurus and as such, these fossils can perhaps help palaeontologists to understand how the huge variety of different duck-billed dinosaurs evolved. Line drawing showing various views of the skull and jaws of Aquilarhinus palimentus.

Picture Credit: Journal of Systematic Palaeontology with additional annotation by Everything Dinosaur

The picture (above), shows line drawings that reconstruct the skull and jaws of A. palimentus.  The areas coloured brown indicate bones belonging to the holotype specimen.  Note (B), showing the skull viewed from the front, Everything Dinosaur has added an illustration of the symphyseal processes of the dentary indicating the unique “W-shaped” component to the lower jaw.  These bony struts are elongated and pushed upwards, causing the dentaries to meet with a “W-shaped” anterior profile.

The shales from which the fossil bearing nodules were recovered (Aguja Formation), date from the lower Campanian (about 80 million years old) and suggest that Aquilarhinus roamed a tidal marshland.  It may have been semi-aquatic using its “shovel-like” jaws to scoop vegetation out of the silt and mud.

The Lower Jaw of Aquilarhinus

Much Smaller than Gryposaurus

“This new animal is one of the more primitive hadrosaurids known and can therefore help us to understand how and why the ornamentation on their heads evolved, as well as where the group initially evolved and migrated from.  Its existence adds another piece of evidence to the growing hypothesis, still up in the air, that the group began in the south-eastern area of the United States.”

A Life Reconstruction of the Head of Aquilarhinus palimentus 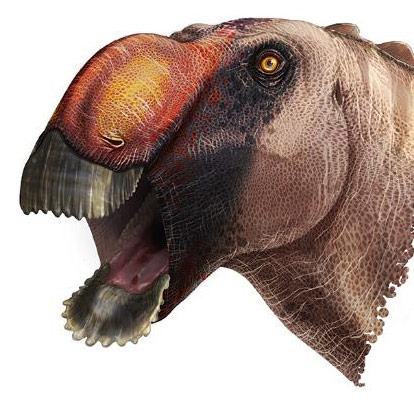 An illustration of Aquilarhinus with a crest along its snout and its unusual beak that may have been used to shovel up soft plants.

Phylogenetic analysis undertaken by the research team reveals Aquilarhinus to be superficially similar to dinosaurs like Kritosaurus and Gryposaurus but more likely to be more closely related to Latirhinus from the Late Campanian of Mexico.  As such, Aquilarhinus does not fit with the main group of duck-billed dinosaurs known as Saurolophidae.  It is more primitive than this group, suggesting there might have been a greater number of lineages than previously recognised that evolved before the great radiation that gave rise to the bewildering array of unadorned, solid and hollow-crested forms of duck-billed dinosaurs that thrived in northern latitudes during the Late Cretaceous.

Most saurolophids had bony head crests of many different shapes and sizes.  Aquilarhinus also sported a bony crest, albeit a simple one shaped like a humped nose.  The discovery of a solid crest outside the major radiation of hadrosaurids supports the hypothesis that all crests derived from a common ancestor that had a simple humped nose.

The scientific paper: “An unusual “shovel-billed” dinosaur with trophic specialisations from the Early Campanian of Trans-Pecos Texas, and the ancestral hadrosaurian crest” by Albert Prieto-Márquez, Jonathan R. Wagner and Thomas Lehman published in the Journal of Systematic Palaeontology.

Everything Dinosaur acknowledges the assistance of a press release from Texas Tech University in the compilation of this article.