Suskityrannus – Our Best Glimpse Yet of a Mid-Cretaceous Tyrannosauroid

The first of what will probably turn out to be numerous new Theropod dinosaurs from southern Laramidia has been announced today.  Writing in the academic journal “Nature: Ecology & Evolution”, a team of international scientists have described a new species of relatively small-bodied tyrannosauroid that helps to fill a gap in the evolution of the Tyrannosaur family.  Significantly, the new dinosaur, named Suskityrannus hazelae, has the same general body shape and feet adapted to running (arctometatarsalian feet), as the later, much larger Tyrannosaurs such as Albertosaurus, Gorgosaurus and T. rex.  This suggests that Tyrannosaurs evolved many of their characteristic features whilst they were relatively small, secondary predators.   When Suskityrannus roamed western North America some 92 million years ago (Middle Turonian faunal stage), this little Theropod was the shape of things to come.

Suskityrannus heralds from the Zuni Basin of New Mexico, specifically the Moreno Hill Formation and it has been described based on two associated but fragmentary skeletons.  Even so, these fossils represent the most complete examples of early Late Cretaceous tryannosauroids described to date.  Dinosaur fossils from the Turonian faunal stage are exceptionally rare, the fossils from the Moreno Hill Formation have provided palaeontologists with an insight into the types of dinosaur that were the forerunners of the key groups of dinosaur that were to dominate the terrestrial ecosystems of North America towards the end of the Cretaceous.  For example, the beautiful life reconstruction of Suskityrannus by Andrey Atuchin (above),  shows a three-metre long Theropod about to feed on some garfish that have become stranded as a result of a flood.  The pair of Zuniceratops are unconcerned about the proximity of the meat-eater, they are many times heavier and have nothing to fear from the fleet-footed tyrannosauroid.  In the background, to the right of the image a large Ornithopod dinosaur can be seen, we think this is probably a life reconstruction of the basal hadrosauroid Jeyawati.

In essence, that is what makes the dinosaurs from the Moreno Hill Formation so significant.  These sediments were laid down before the diversification of the tyrannosaurids, hardrosaurids and ceratopsids, all key components in later Cretaceous dinosaur assemblages from North America.

Named Suskityrannus hazelae, (pronounced Sus-key-tie-ran-us haze-ah-lie), analysis of the jaw bone indicates that this dinosaur had an elongated skull measuring between 25 and 32 cm in length.  Despite its small size, less than 3 metres long, with a hip height of around 1 metre, Suskityrannus had a powerful bite, foretelling the evolutionary direction of later Tyrannosaurs which were to evolve massive skulls with bone crushing bite forces.

The Fossil Skeleton of S. hazelae Compared to the Dentary (Lower Jaw) of Tyrannosaurus rex 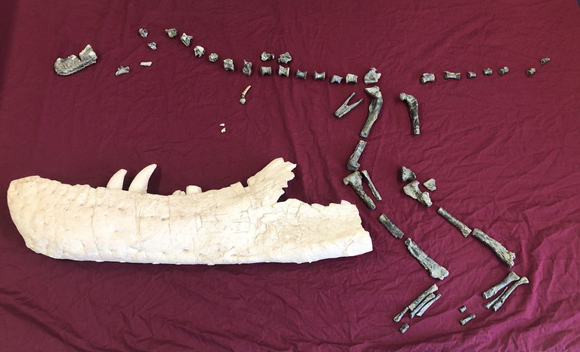 The fossil remains of Suskityrannus compared to a lower jaw from a Tyrannosaurus rex.

The name Suskityrannus hazelae is derived from “Suski,” the Zuni Native American tribe word for “coyote,” reflecting this tyrannosauroid’s position in the ecosystem as a secondary predator.  The species name honours Hazel Wolfe whose support made possible many expeditions to the Zuni Basin of New Mexico.  The first evidence, including a partial skull was found in 1997 by co-author Robert Denton (GeoConcepts Engineering).  The second, more complete specimen was found in 1998 by Sterling Nesbitt, a high school student at the time, but now based at the Department of GeoSciences (Virginia Tech).  Dr Nesbitt is the corresponding author for the scientific paper.  The fossils were housed at the Arizona Museum of Natural History for many years before they were formally studied.

“Suskityrannus is a key link between the enormous bone-crunching dinosaurs like T. rex and the smaller species they evolved from.  The new species shows that Tyrannosaurs developed many of their signature features like a muscular skull, broad mouth, and a shock-absorbing foot when they were still small, maybe as adaptations for living in the shadows.” Corresponding author Sterling Nesbitt, with the fossilised remains of Suskityrannus laid out in their anatomical position.

The Moreno Hill and the Bissekty Formations

The Moreno Hill Formation is analogous to the Bissekty Formation of Uzbekistan.  Within the northern hemisphere, dinosaur fossils from the Turonian faunal stage are exceptionally rare, although thousands of miles apart, the strata are approximately the same age (around 90 million-years-old) and the dinosaur specimens found provide evidence of similar faunas.  The tyrannosauroid Timurlengia was named and described from fragmentary remains from the Bissekty Formation in 2016, the publication of a scientific paper on Suskityrannus will help palaeontologists to better understand how relatively small-bodied tyrannosauroids evolved into giant apex predators some twenty million years later.

To read about the discover of Timurlengia: Fossil Study Suggests How Tyrannosaurs Got Big

How Big Were the Arms of Suskityrannus?

As for that other famous Late Cretaceous Tyrannosaur body trait, the much reduced arms, scientists are very much in the dark about how big the forelimbs of Suskityrannus were.  Very little forelimb fossil material has been recovered.  Scientists can’t even say with any certainty whether Suskityrannus had two-fingered or three-fingered hands.  Cross-sectional analysis of slices of bone indicate that both known specimens were juveniles.  The fossils are providing further information on tyrannosauroid ontogeny.  Despite not being fully-grown, the authors are confident that Suskityrannus was not as big as its descendants, the famous apex predators of the Campanian and Maastrichtian faunal stages of the Cretaceous.

Commenting on the discovery a spokesperson from Everything Dinosaur stated:

“When we made our palaeontology predictions for 2019, the last prediction we made was that more tyrannosaurids would be named and described from fossil material associated with southern Laramidia.  We suggested that two new species would be named.   Suskityrannus hazelae has helped us to confirm our prediction made earlier this year, at least in part.  We are expecting more Theropod news to come out of the southern United States over the next few months.  These are exciting times for anyone studying the Tyrannosauroidea.”