Young dinosaur fan Jack wrote to Everything Dinosaur to tell us how much he enjoyed our recent visit to his school.  Jack is in Year 2, shortly to move onto Year 3 and he loves dinosaurs.  Team members at Everything Dinosaur visit schools to conduct dinosaur and fossil themed teaching workshops in support of the national curriculum – everything from Acrocanthosaurus through to Zuniceratops, an A-Z of the Dinosauria.

Learning About Ankylosaurus and Armoured Dinosaurs

Jack wrote to thank us for visiting his school.  His favourite part in the dinosaur themed workshop was learning about how some armoured dinosaurs kept themselves safe from Tyrannosaurus rex.  He also explained that he enjoyed touching the ammonites and trilobites and learning about fossils.  Some of the fossils we bring to schools are very big and heavy, a number of Jack’s classmates were amazed at how big some fossils can be.

Fossils Come in All Shapes and Sizes

A large ammonite fossil in a boulder.

During the term topic, several children brought in fossils from home.  These are fossils they collected whilst visiting various places around the British Isles such as Lyme Regis, the Isle of Wight and the Norfolk coast.  Our dinosaur and fossil expert took time out over the mid-morning break to look at some of the items the children had brought in.  Once the workshop had been concluded, a number of follow-up tasks and extension exercises were proposed, we even had some homework too.  During our workshop, we promised to send more information on dinosaurs plus pictures of ammonites for the children to colour in and to use in their non-chronological reports about Mary Anning and fossil hunting that they had been compiling.

The thank you letter that Jack sent into Everything Dinosaur was part of a class exercise.  The aim of this exercise was to help the children gain more confidence with their handwriting.  Our thanks to Jack for his letter and also a big Iguanodon thumbs up to all the children that have written to us over the course of the summer holidays.  Our team members do read them all and we then post them up onto one of the walls in our warehouse.  They make a fantastic display.

PNSO Age of Dinosaurs Model Range Available from Everything Dinosaur

Everything Dinosaur now stocks the PNSO Age of Dinosaurs model range and what a fantastic selection of prehistoric animals it is!  These museum quality replicas and beautifully crafted toys cover a wide selection of ancient creatures, there is a T. rex and Triceratops of course but the PNSO Age of Dinosaurs series also encompasses armoured dinosaurs such as Chungkingosaurus, prehistoric whales such as Basilosaurus and fearsome, mega-mouthed sharks like Megalodon. The range includes a selection of small prehistoric animal models, each one with its own unique species name such as “Aaron the little Tyrannosaurus”, Jonas the little Archaeopteryx and “Sethi the little Kentrosaurus”.

Sethi the Little Kentrosaurus – Dinosaur Toys that Accompany Your Growth “The PNSO product range aims to inform and to educate and contains a huge variety of prehistoric animal models, both big and small.  It is wonderful to see replicas of some of the amazing dinosaurs from China incorporated into this product range and it’s not just dinosaurs too, there are Ichthyosaur models such as Himalayasaurus to collect and even a Confuciusornis!” A Cretaceous Bird Named after a Chinese Philosopher

Many Confuciusornis fossils have been found in the Liaoning Province (north-eastern China) and fossils of these early birds (they belong to a group called the Enantiornithines), have helped palaeontologists to work out how Maniraptoran feathered dinosaurs evolved into birds.  We are sure that the great Chinese philosopher and teacher Confucius would have approved of these prehistoric animal replicas, helping to inform and educate about China’s remarkable fossil record.  Male birds were slightly different from the females, just like many extant species of birds today.  The males had a pair of long tail feathers, the females lacked these adornments.  The PNSO Dinosaurs of China Confuciusornis model is therefore a male bird.  The long tail feathers played no role in powered flight, they probably were used in visual displays as the males attempted to attract a mate.

A Bird in the Hand – The PNSO Confuciusornis Model “A bird in the hand”, the Confuciusornis model from PNSO.

As well as family favourites such as Triceratops and Tyrannosaurus rex, the larger models include spectacular models of sea monsters.  There is a serpentine Basilosaurus replica, that at around half a metre in length, makes a brilliant centrepiece to any model collection.  We must also mention the fantastic Megalodon (C. megalodon) replica, the detail on this giant shark figure is stunning. Swimming alongside the Basilosaurus in the PNSO Age of Dinosaurs model collection (but not necessarily in the same geological record), is the hugely impressive Megalodon shark model. 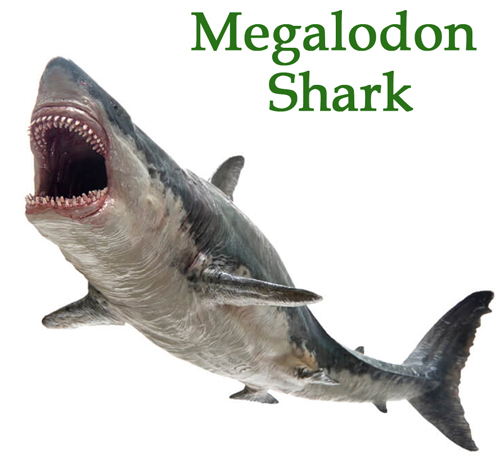 To view the range of prehistoric animals: PNSO Dinosaur Models and Figures