One of the best reasons for making a replica of a dinosaur is because it happens to be one of your favourites.  That’s the reason given by talented Spanish artist Jesús Toledo for adding the gorgeous Torvosaurus tanneri model to the Paleo-Creatures range of prehistoric animals.  In this short video (2:37), Jesús explains a little about the two species in the Torvosaurus genus (T. tanneri from the United States and Torvosaurus gurneyi from Portugal).  In addition, he provides viewers with a close up look of this well-crafted figure.  The genus name means “Savage Lizard” and one glance at this Paleo-Creatures model convinces you that this Late Jurassic Theropod was a formidable predator.

For someone based in Spain, choosing the Torvosaurus species known from the Morrison formation of western North America might seem a little strange, especially when the European species is believed to have been larger and heavier.  Still, it is fascinating to consider where in the food chain Torvosaurus was and how it competed with the several other types of large, carnivorous dinosaur that shared its habitat.

When T. gurneyi was formally described in 2014, many media outlets described it as the largest carnivorous dinosaur from Europe known to science.  Theropod fossils from Europe tend to be fragmentary at best, however, based on an assessment of the upper jaw bone and a partial femur, this species of Torvosaurus from the Upper Jurassic of Portugal (Lourinhã Formation) may have grown to lengths in excess of ten metres. In the video review, dinosaur model fans get the chance to view this Paleo-Creatures replica close up.  The proportions of the model have been carefully thought out and the articulated jaw is a nice touch.  The vivid colouration is very striking and it is worth remembering that every single Torvosaurus is hand-painted, it is a beautiful dinosaur figure. 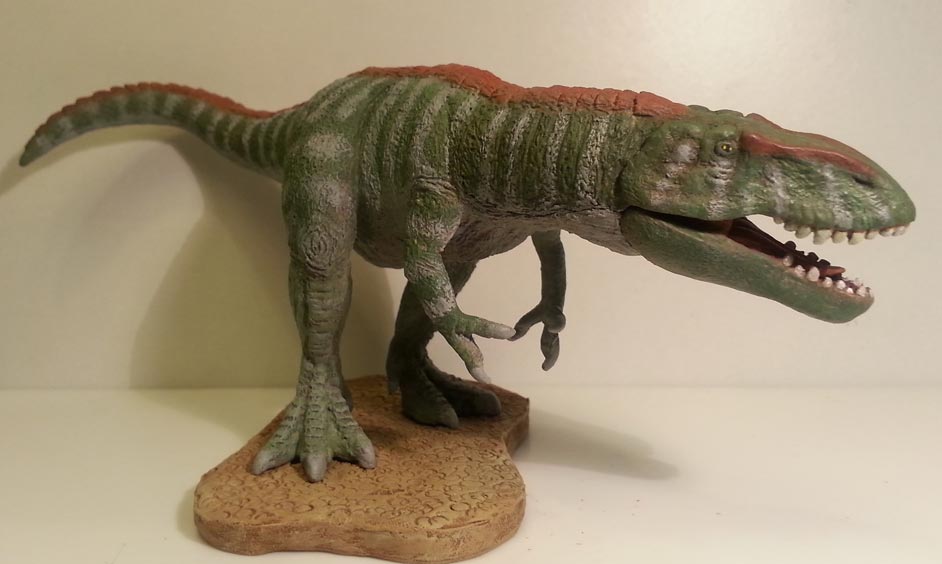 Jesús Toledo has managed to produce a well-balanced figure, the feet are not too oversized and the replica is very stable on its sandy coloured base.  Getting large bipeds to stand in a realistic pose can be a headache for designers and sculptors, but Jesús has achieved an excellent result with his Torvosaurus.

Fittingly, we wanted to conclude this article on the ferocious Torvosaurus tanneri by mentioning a recently described Theropod that might challenge T. gurneyi for the title of the biggest meat-eating dinosaur known from Europe.  A team of researchers writing in the journal “Palaeontologica Electronica” in August of this year (2016), have described the fragmentary bones of a super-sized carnivore, one that may have rivalled T. gurneyi in terms of size.  Nick-named the “Monster of Minden”, the scientists, which included Dr Oliver Rauhut, from the Bavarian Collection for Palaeontology and Geology, have named this dinosaur Wiehenvenator albati (the name means hunter from the Wiehen Hills).  Although size estimates do vary, Wiehenvenator has been estimated to have been about ten metres long.  It has been classified as a sister taxon to Torvosaurus, although it lived at least ten million years earlier.

To read an article about the discovery of Torvosaurus gurneyi: Europe’s Largest Meat-Eating Dinosaur Described to Date

For further information about Wiehenvenator albati: The “Monster of Minden”