Dunkleosteus Exhibit at the Naturmuseum Senckenberg

At the Naturmuseum Senckenberg (Frankfurt, Germany), visitors are treated to a spectacular gallery featuring that most diverse group of vertebrates, the fish.   Fans of Palaeozoic fossils can see several specimens on display, including a beautiful Dunkleosteus exhibit.

The Anterior Portion of Dunkleosteus on Display 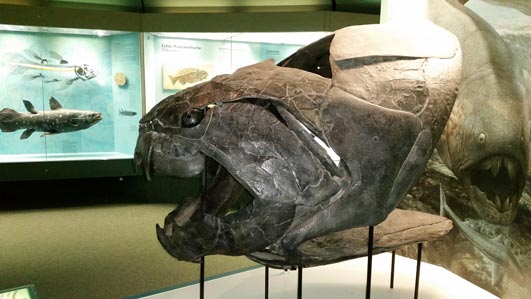 Greeting you at the gallery entrance area is a cast of the plated skull and jaws of the giant Devonian predator Dunkleosteus.  It certainly is a most impressive sight.  Sharp-eyed readers can spot the John Sibbick illustration that can be seen behind the replica skull with its shear-like jaws.  In the background part of the fossil fish display can be seen.  It features a life-size model of a Coelacanth (Latimeria). A Dunkleosteus cast on display.

Dunkleosteus was a huge, prehistoric fish with an armoured head made up of several bony plates that covered over thirty percent of the entire animal’s length. Larger specimens had dermal armour that was up to five centimetres thick.  The Placoderms (armoured fish); evolved in the Silurian period from ancestors that had no teeth, instead this group of fish developed a pair of extremely sharp bony plates that hung from the top jaw, the edges of the lower jaw were also bony and as sharp as a razor.  The jaws could be slammed together like a pair of self-sharpening shears.  Dr John Newberry formally named and scientifically described this apex predator in 1873.  The genus name honours the famous American palaeontologist Dr David Dunkle of the Cleveland Museum of Natural History.

As for size, a number of estimates have been published.  The Everything Dinosaur fact sheet sent out with Dunkleosteus model purchases suggests a maximum length of about nine to ten metres, with a maximum body mass of around four tonnes.