As the summer holidays approach many dinosaur fans are looking forward to selecting their prehistoric animal themed reading.  As well as all the non-fiction texts that noses will get buried into over the vacation, try “Edge of Extinction” a new dinosaur adventure story penned by the talented Laura Martin. 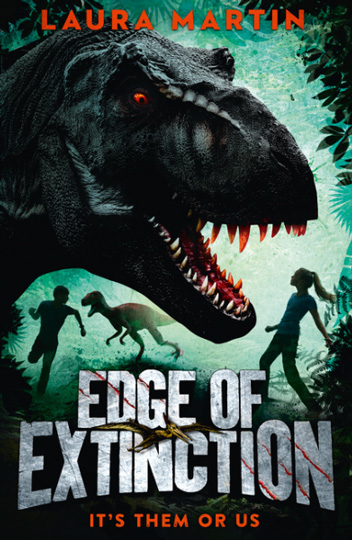 The exciting plot revolves around the adventures of twelve-year-old Sky Mundy, a bit of a rebel and living in a world dominated by dinosaurs.  Two hundred years ago, scientists made the folly of bringing back the dinosaurs via cloning.  A disease that came with the Dinosauria, wiped out most of the human race forcing the survivors to hideaway in a twilight world.  The underground compounds offer some security, but Sky has to venture out into the world of dinosaurs to solve the mystery of her father’s disappearance.  As an aside, she and her best friend Shawn have to save the world!

To commemorate the publishing of Laura’s first novel, Everything Dinosaur is running a special competition on their Facebook page to win a copy of this thrilling new book.

Book Competition – Win with Everything Dinosaur – Please note this competition is now closed.

Simply “Like” Everything Dinosaur’s FACEBOOK page, then provide a name for the big, meat-eating dinosaur that features on the front cover of this thrilling paperback!

We will draw the lucky winner at random out of one of our hard hats and the dinosaur name caption competition closes on Sunday 31st July.  Good luck, just come up with a name for the big front cover dinosaur and “like” our Facebook page for a chance to win.

Described as a blend of “Jurassic Park” meets “Indiana Jones”, this debut novel by Laura has received rave reviews from young readers:

Alex (aged 10), stated: “The book was about a group of dinosaurs, which had taken over the world.  It was full of tension, action and danger.”

Nine-year-old Ross added: “Edge of Extinction by Laura Martin is a riveting read.  It was action packed and I could not put it down.”

A Note for Mums and Dads

Commenting on the publication of this new story all about life in a prehistoric animal dominated world, a spokesperson from Everything Dinosaur said:

“This book, published by Harper Collins, makes an ideal summer read for a young dinosaur fan.  In addition, it is great to see a girl as the central character and the heroine of the story.”