Everything Dinosaur has received permission from Papo to reveal the official images of the new for 2016 dinosaurs and prehistoric animal models which are being added to the company’s “Les Dinosaures” range.  Leaked images from the forthcoming Papo catalogue have been circulating on line via various forums and such like, but our team members felt it appropriate to respect Papo’s wishes and to only show pictures of the new replicas when they had received permission to do so. Marking the thirtieth anniversary of the naming and scientific description of this amazing dinosaur, Papo will be introducing a Baryonyx figure in early 2016.  This is the second member of the Spinosauridae the company has made, if it proves to be as popular as their iconic Spinosaurus replica then the designers will be chuffed.  The pose is very dramatic and highly stylised, what we have come to expect from the French model maker.  The lower jaw will be articulated and we appreciate the addition of a nasal crest, not all Baryonyx figures have this feature.  The model is somewhat robust looking and the tail is positioned on the ground to provide support.  We suspect this tripodal stance can be explained by the difficulties in producing a free standing replica of Baryonyx in what may have been a more life-like, realistic pose with the tail lifted well above the ground and the head much lower, almost at the same height as the tip of the tail.

This model is going to be one of the first available from Papo, Everything Dinosaur expects stocks to arrive at their warehouse in quarter one.

The Feathered Velociraptor from Papo Available soon from Everything Dinosaur.

In contrast to the Papo Baryonyx with its more traditional stance, Papo have produced their first feathered, non-avian dinosaur model*.  The details look amazing and we can’t wait to see the model “in the flesh” as it were, customers of Everything Dinosaur won’t have to wait too long, this model will be in stock during quarter one of next year.

* We classify the recently introduced Papo Archaeopteryx figure in the clade Avialae, a transitional fossil on the road to the true birds (Aves).

Note how in this figure the tail is held aloft, the model is balanced on its two toes of the right hind foot with a bit of support from that fleshy pad at the base of the foot.  The left leg is depicted as if it is just about to be lifted up, the third toe claw is touching the ground.  Additional support and stability is provided by the digits of the left limb we suspect, but a better idea of the stability of this sculpt will come when we can see and handle the first samples.  We think that the Papo designers will have made sure that their feathered Velociraptor is quite stable.

The Colour Variant of the Papo Running Tyrannosaurus rex Also coming out quarter 1, is this fantastic colour variant of the Papo Running T. rex.  It really is a most striking model and we look forward to picturing this replica next to the popular Papo green Running Tyrannosaurus rex that was launched back in 2012.  No prizes for guessing the size of this model, it should measure around thirty-three centimetres in length.

To view Everything Dinosaur’s range of Papo replicas and figures: Papo Dinosaurs and Prehistoric Animal Models. The pick of the bunch (and it was a tough choice), is this wonderful Kaprosuchus replica.  The model of “boar croc” will be available sometime in quarter 2.  Known from a beautifully preserved skull that measures more than half a metre in length, palaeontologists have suggested that this ancient crocodilian, unlike its modern relatives, spent most of its life on land.  It was a “cursorial crocodile” a predator that simply did not lie in wait ready to ambush, Kaprosuchus would have chased after you.  It’s a frightening thought, but over rough terrain this six-metre-long giant would have been able to run faster than most people. 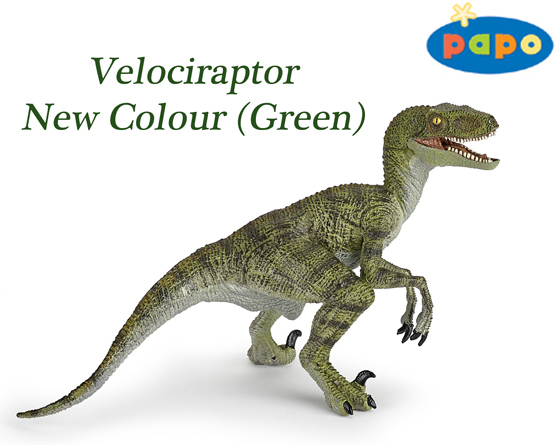 The fifth new model being added to the Papo range next year is this colour variant of the company’s existing Velociraptor (55021).  It is a very attractive colour scheme and it contrasts nicely with the feathered Velociraptor figure that will be introduced a few months earlier (expect the Velociraptor green colour variant to be in stock at Everything Dinosaur in quarter 2).  Fans of the summer blockbuster “Jurassic World” will remember the four Velociraptors that, the film’s hero Owen Grady, partially trained – he’s the alpha!  There’s Blue, Delta, Echo and the youngest pack member Charlie.  Collectors and fans of Papo have already nick-named this the latest edition to the Papo “raptor” pack – Charlie.  Charlie will be in stock at Everything Dinosaur and when it arrives this means that there will be forty replicas in the Papo “Dinosaures” series.

At Everything Dinosaur we predict that a number of Papo figures will have new paint schemes next year.  The Papo Stegosaurus model (55007) was given a fresh look this year and we suspect that other figures in the Papo range will also get a bit of a makeover.

The five new figures represents a considerable increase in Papo’s prehistoric animal model output, in each of the last two years, Papo has added just three models to their range.  We look forward to welcoming these new for 2016 Papo prehistoric animals into our warehouse.