The Hands and Feet of Homo naledi

Two new papers on the latest hominin to be added to the human family tree have just been published in the academic journal “Nature Communications”.  Less than one month has passed since Everything Dinosaur blogged about the amazing fossil finds in the Rising Star Cavern, part of a cave system located in an area known as the Cradle of Human Kind close to Johannesburg.   Researchers from the Evolutionary Studies Institute (University of Witwatersrand), in association with National Geographic, the Department of Science and Technology and the National Research Foundation of South Africa announced the discovery of a new species of hominin – Homo naledi.  These papers focus on the anatomy of the hands and feet respectively, but why the fascination with the fingers and toes of this South African species?  The explanation is simple, the hands and feet can provide scientists with valuable information as to how human H. naledi may actually have been.

The Hand and Foot of Homo naledi The hand and the foot of Homo naledi.

Good at Climbing but also Adapted for Bipedal Walking

The papers reflect just how remarkable the discovery of Homo naledi was.  The first point to make is that palaeoanthropologists do have a lot of bones to study.  In total, some 1,550 numbered fossil elements have been retrieved from the difficult to access cave.  Taken together these two papers indicate that this human-like creature, was uniquely adapted to both an arboreal existence (tree climbing) and walking on the ground.  In addition, the structure of the bones in the hand suggest that these hominins were capable of intricate hand movements and precise manual manipulation.

The titles of the two papers, state precisely what they are about, full marks to the research team for their brevity.  No long-winded titles here, these papers do “exactly what it says on the tin.”

The research were conducted by a team of international scientists associated with the Evolutionary Studies Institute at the University of the Witwatersrand in South Africa, home of the Rising Star Expedition team that made the 2013-discovery at the Cradle of Human Kind.  According to the researchers, when considered together, these papers indicate a decoupling of upper and lower limb function in H. naledi, and provide an important insight into the skeletal form and function that may have characterised early members of the Homo genus.  An evolutionary tree that eventually led to our own species Homo sapiens.

The foot of Homo naledi

Lead author, of the paper published on the pes (foot), William Harcourt-Smith and his colleagues describe the H. naledi foot based on 107 foot bones recovered from the floor of the Denaldi Chamber (Rising Star), including a well preserved adult right foot.  They show the H. naledi foot shares many features with a modern human foot, indicating it is well-adapted for standing and walking on two feet (bipedalism).  However, there are differences from the bones found in the foot of a Neanderthal, or our own feet for that matter.  For example, the authors note that the Homo naledi foot differs in having more curved toe bones (proximal phalanges) and the arch of the foot is not so pronounced.

The hand of Homo naledi

Lead author, of the paper that describes the hand, Tracy Kivell (University of Kent) and her colleagues describe the hand of Homo naledi based on an assessment of approximately 150 hand bones from the cave.  One of the key finds was a nearly complete adult right hand (manus), it was missing one small bone in the wrist.  This is an exceptionally rare find in the human fossil record.  As the tiny toe and finger bones were found in a number of cases in almost perfect articulation, this rules out the possibility of water having run through the cave at some point after the bodies came to be at that location.  Running water would have scattered the bones but the scientists found this not to be the case.  It is likely that the bodies have remained undisturbed, this suggests that the corpses may have been deliberately placed in this part of the cave system.  For such a small-brained hominin to show care for the deceased is very unexpected and more research is required to date the fossils and to try to understand how the remains of at least fifteen individuals came to be in the cavern.

The Delicate Finger Bones Preserved in Articulation in the Cavern 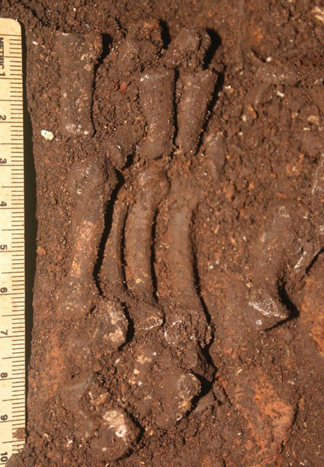 The hand of Homo naledi.

The H. naledi hand reveals a unique combination of anatomy that has not been found in any other fossil human before.  The wrist bones and thumb show anatomical features that are shared with Neanderthals and humans and suggest powerful grasping and the ability to use stone tools.  The thumb is particularly robust, this is a trait only found in recent hominins.

However, the finger bones are more curved than most early fossil human species, such as Lucy’s species Australopithecus afarensis, suggesting that H. naledi still used their hands for climbing in the trees.  This mix of human-like features in combination with more primitive features demonstrates that the H. naledi hand was both specialised for complex tool-use activities, but still used for climbing locomotion.

Commenting on the significance of the Homo naledi hand, Dr Kivell stated:

“The tool-using features of the H. naledi hand in combination with its small brain size has interesting implications for what cognitive requirements might be needed to make and use tools, and, depending on the age of these fossils, who might have made the stone tools that we find in South Africa.”

Age is the Key

More research will be carried out into this remarkable South African fossil discovery.  The key question is determining the age of the fossils.  Obtaining an accurate date for Homo naledi would help palaeoanthropologists place this species within the human lineage.  For example, this could be a tool-using, human-like creature that lived some three million years ago, or perhaps a more recent member of the hominin family, a human-like creature that retained some ancient Australopithecine traits that survived until much more recently.  This latter scenario is not that far-fetched, discoveries on the Indonesian island of Flores stunned the world of anthropology when it was revealed that a dwarf species of human (Homo floresiensis) had lived on the heavily forested island until, perhaps, as recently as 12,000 years ago.

The paper on the hand, opens up a debate amongst scientists.  The hand looks capable of intricate manipulation, indicating tool usage, but the brain of Homo naledi is estimated to have been not much bigger than a chimps.  If the hypothesis is correct, that the use of tools changed the shape of the bones in the hand, then the implication is that a small-brained hominin was making and using complex tools.  Comparing the hand anatomy to our own species and to that of the Neanderthal (H. neanderthalensis), Dr Kivell commented

“They [Neanderthals and humans] make tools, complex tools, and use them all the time, enough so that it’s actually changed their morphology.  Perhaps naledi was using tools that were made out of different materials or doing some other forceful, precision-grip manipulations, but the most straight-forward explanation is that naledi is making and using tools.”

This may be the most straight forward explanation but there may be other reasons why those hands are so human-like.  Analysis of the teeth will provide a detailed picture of the diet of these creatures.  If, as has already been proposed that they were largely vegetarian, then the hands could have evolved grasping and manipulation traits to help them search for seeds, to pluck fruits and to hold small items of food.  Clearly, the Rising Star fossils will provide scientists with a unique opportunity to learn more about hominin evolution.  Now, if we can only get an accurate date…

To read about the cave discovery: Homo naledi A New Species of Hominin from South Africa.

Everything Dinosaur acknowledges the help and assistance of the media team at the University of Witwatersrand in the compilation of this article.