Today, one of Everything Dinosaur’s fossil experts visited St Paul’s R.C. Primary school to help Year 1 with their term topic which is all about fossils and dinosaurs.  Under the expert tutelage of the class teacher (Miss Holdsworth) and with the support of the enthusiastic teaching assistant Mrs Sharpling, the children have been busy learning about prehistoric animals and famous people from history such as Mary Anning.

Outside the classroom, the Year 1 children had helped create a very colourful dinosaur inspired wall display.  Our dinosaur expert certainly felt at home when he saw the wonderful artwork. 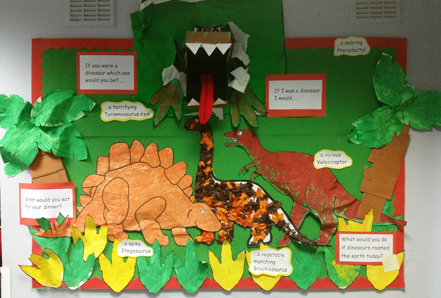 Velociraptor and Tyrannosaurus rex (meat-eaters), feature on the wall display, along with a flying reptile and two dinosaurs that ate plants (Brachiosaurus and Stegosaurus).  During the morning, we explored dinosaurs that ate meat and learnt about some plant-eating dinosaurs as well.  The fierce monster bursting out of the wall in the picture above is most impressive.  A fantastic red tongue can be seen in the photograph and our dinosaur expert explained to the children just how long the tongues of some dinosaurs could be.

In the Year 1 classroom, the children had a role play area in which to store their dinosaurs.  The role play table was just at the right height for the children, thanks to the excellent woodworking skills of Miss Holdsworth.  If Everything Dinosaur ever need some scaffolding put up around one of our mounted dinosaur skeletons, we now know who to call. A role play table for Year 1.

The walls of the well organised classroom were covered in examples of the children’s work.  A space had been set aside on one of the walls for some dinosaur bone art that had been planned for later on in the term topic.  Another wall displayed the results of a writing exercise in which the Year 1 children had written about what they would do if they were a dinosaur.  When working with Lower Key Stage 1 children in the autumn term the focus is on getting the children to feel more confident with their writing.  The exercise helped the children with the spacing of words and the use of grammar such as the full stop and comma.  The “pinkie palaeontologist challenge” we set the class which involved composing a short story about a Triceratops coming to lunch at the school should also assist the budding young scribes.

Examples of Individual Work Posted on the Classroom Wall

The picture above show a dinosaur themed writing display which the children can certainly be proud of.

After the morning dinosaur themed workshop had been concluded, Mrs Sharpling led the class in a singing of “Yellow Bird”, this was very appropriate as during the teaching session our dinosaur expert had informed the children that many dinosaurs might have been covered in feathers, even bright yellow ones.