With the news that Safari Ltd had ended its twenty-eight year partnership with the Carnegie Museum of Natural History, which broke in the spring, model collectors and dinosaur fans alike have been eagerly awaiting developments.  What prehistoric animal models would come out in 2016?  Everything Dinosaur can now reveal that information, the wait is over and enthusiasts of all things Dinosauria et al are not going to be disappointed.

Here are the new prehistoric animals:

Everything Dinosaur intends to stock all these items, we will do all we can to keep our customers and fellow prehistoric animal fans informed about deliveries into our warehouse.

There are a total of five new replicas, this is the same total as last year, the 1:10 scale Carnegie Collectibles Velociraptor, plus four not to scale models under the Wild Safari brand that has now become the flagship brand for prehistoric animal replicas the Florida-based company makes.

Let’s take a look at the new models in turn, firstly the Plesiosuchus model (marine crocodile).  This Late Jurassic carnivore was one of the super predators of the shallow seas that covered much of Europe.  It is estimated to have been around seven metres in length, approximately the size of the largest Saltwater crocodiles (Crocodylus porosus) found today.  Plesiosuchus means “near crocodile” and is pronounced Plee-see-oh-sook-us.  It was a member of the Metriorhynchoidea (pronounced Met-ri-oh-rink-oi-deer [A super family of the Crocodylomorpha]).  It is great to see a model of a metriorhynchid from Safari Ltd. The Plesiosuchus replica measures a fraction over seventeen centimetres and is around four and half centimetres tall (it’s the tail).

Now the Iguanodon model comes into focus.  It is great to see another ornithopod in the Safari Ltd Prehistoric Life model collection. Over the years, there have been a number of iguanodont models made, with the retirement of the Carnegie Collectibles Iguanodon replica, it is great to see this introduction.  Iguanodon is brought bang up to date, the bipedal pose of the earlier model, launched in 2007 and effectively a re-paint of an even earlier Carnegie replica, has been replaced by a walking on all four limbs approach.  The body proportions seem much more accurate and we love the thickened base of the tail.  These ornithopods were powerful animals and indeed the base of the tail and pelvis were very robust.  The model has been given a striped colour scheme and we adore the flashes of purple, not a colour associated very often with dinosaur models.  It is a nice touch.  The model measures 18.5 cm by 7 cm. Available soon from Everything Dinosaur – Shunosaurus.

The “sauropod crossed with a Llama”, as an Everything Dinosaur member of staff termed this replica when trying to decipher the double page advert that showed a glimpse of this figure, turns out to be a Shunosaurus.  The colourful figure measures 16.5 cm in length and that detailed head stands around 7 cm high.  One of the best known of all the Chinese Dinosauria, certainly the best known sauropod, thanks to the huge fossil assemblage excavated from the Dashanpu Quarry site (Sichuan Province).  This looks like an excellent interpretation of the extensive fossil material.  Well done Safari Ltd for bringing out such an interesting replica. A new fact sheet will be required for the fourth new prehistoric animal figure we are featuring here – Masiakasaurus, (the name means vicious lizard).  An agile theropod that lived on the island of Madagascar in the Late Cretaceous.  The forward pointing teeth have been very well depicted in this new for 2016 replica.  We suspect that this is the first dinosaur model made by Safari Ltd, whose scientific name was inspired by a band member of Dire Straits.  The formal, binomial name for this two metre long terror is Masiakasaurus knopfleri.  It was the music of Dire Straits’s front man Mark Knopfler that inspired the field team behind this particular dinosaur fossil discovery.

The design team at Safari Ltd have taken into careful consideration details of this dinosaur’s known skeleton (about two-thirds of all the bones in the skeleton have been described to date).  Note the position of the hands and digits, although an abelisaurid, Masiakasaurus had proportionately much longer front limbs than other members of this theropod dinosaur family.  It is an attractively painted model, the stripes and green markings are a good choice, it is likely that this dinosaur, required camouflage to help it avoid being spotted by larger meat-eaters that shared its floodplain environment.

The new Safari Ltd Masiakasaurus is around 18.5 cm in length and stands an impressive 8.25 cm tall. One of the largest theropods known, Carcharodontosaurus is a firm favourite amongst dinosaur fans and model collectors alike.  It is great to see this interpretation by Safari Ltd.  We had thought that the large, meat-eating dinosaur was going to be a megalosaur, we got wrong but we are delighted to see this North African monster join the Safari Ltd “Prehistoric Life” fold.  At an impressive 22.75 cm long and standing 10.25 cm tall this is the biggest model dinosaur that Safari Ltd are bringing out next year.

Look out for announcements on Everything Dinosaur’s Facebook page, Twitter feed and on this blog site.  More information including when they will be in stock will be posted up soon. 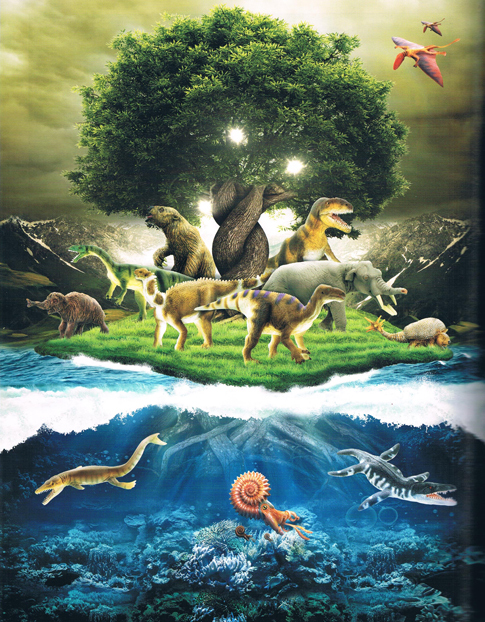 As seen in Prehistoric Times magazine, the Wild Safari Prehistoric World advert featuring some of the new prehistoric animal models.

Check out Everything Dinosaur’s Facebook page for pics of the prehistoric mammal models that are being re-introduced by Safari Ltd.

A new study into the sleeping patterns and behaviours of crocodiles suggests that these reptiles are able to sleep with one eye open.  The ability to sleep in this way probably evolved to help the animal’s stay vigilant and alert to danger.  This phenomenon is termed unihemispheric sleeping, half the brain rests whilst the other half, connected to the open eye remains alert.  Mammals such as dolphins can do this along with some birds and reptiles.

If crocodiles and some birds are capable of unihemispheric sleep, could the dinosaurs have slept in this manner?  Birds and crocodiles are the closest living relatives of dinosaurs, perhaps dinosaurs could sleep with one eye open? A close-up view of the glossy eye of the Rebor hatching Baryonyx figure.  Did dinosaurs sleep with one eye open?

Researchers from the Max Planck Institute for Ornithology (Germany) along with colleagues from La Trobe University (Australia) studied the sleep patterns and behaviours of Saltwater crocodiles.  These reptiles tended to sleep with both eyes closed but when another crocodile was introduced into their tank or a person approached, they kept one eye focused on the intruder.  Dinosaurs may have been vulnerable when they slept, as close relatives of the Dinosauria, demonstrate unihemispheric sleep, it is intriguing to consider whether dinosaurs slept with one eye open.

To view the large range of dinosaur themed toys and educational gifts available from Everything Dinosaur: Dinosaur Toys and Gifts.

Extension Ideas and Activities for Schools

Answer.  When animal’s sleep they are vulnerable to attack, staying vigilant in this way can help to keep the animal’s safe.  In addition, some aquatic mammals are able to do this (dolphins etc.), they sleep with one eye open so that they can keep an eye on the rest of the pod.  It stops them becoming detached from their social group.

Answer.  They could hide, for example in burrows, they could climb trees to keep themselves safe (many birds roost in trees), they could live in a group such as a herd.   Whilst some herd members slept others could keep watch.

Answer.  This ability may have evolved in unrelated groups of animals independently, a case of convergent evolution, whereby similar characteristics evolve in unrelated animals as a result of having to adapt to similar environments or conditions.  Alternatively, this ability could have evolved long ago, in the shared, common ancestor of modern birds, mammals and crocodiles.

Ask the pupils to think about other examples of convergent evolution, for example bird wings and those of bats – similar characteristics but ones that have evolved independently in unrelated animals.