It might be one of the best known of all the genera of Mesozoic marine reptiles, but the Ichthyosaurus genus has been becalmed in terms of new additions to the species list.  That is, until a remarkable discovery in the fossil collection of the Doncaster Museum and Art Gallery led to the naming of a new species.  Ichthyosaurus anningae, the first “new” Ichthyosaurus for 127 years.  A paper describing this new species is due to be published in the prestigious academic publication “The Journal of Vertebrate Paleontology” and it is great to see that the trivial name honours Dorset fossil collector Mary Anning, it was Mary along with her brother Joseph, who found the first Ichthyosaurus fossils to be scientifically studied (1811). The fossil, representing a sub-adult specimen, had resided in the collection of the Doncaster Museum and Art Gallery since it had been acquired sometime in the early 1980s.   It was excavated from Lower Jurassic strata of West Dorset, but we at Everything Dinosaur, are unable to provide further information as to who exactly discovered it.  The fossil is believed to have come from the Lower Pliensbachian Stonebarrow Marl Member (Charmouth Mudstone Formation), which forms part of the geology of southern England’s famous “Jurassic Coast”.  The specimen, which measures around 1.5 metres in length is nearly complete, there is a beautifully preserved skull, much of the front portion of the body including ribs and preserved stomach contents.  The assigned holotype (DONMG:1983.98) had been mislabelled as a plaster cast replica.  Team members at Everything Dinosaur recall seeing the image of the fossil used to help promote children’s holiday activities at the Museum, it emphasises the importance of regional museums and their collections.  There are probably a significant number of new species awaiting discovery, not in the cliffs of Monmouth Beach, Lyme Regis, but in the draws and cabinets of museums.

Newest Ichthyosaurus on the Block (I. anningae)

This is not the first time that a new Mesozoic species has been identified from a museum collection.  Back in 2007, Everything Dinosaur wrote about the discovery made by then PhD student Mike Taylor at the Natural History Museum (London), which led to the naming of a new species of sauropod dinosaur.

To read the article: How to Find a New Dinosaur – Look in a Museum.

Dean Lomax, Honorary Scientist at The University of Manchester, examined the specimen in 2008.  He noticed a number of anatomical differences between this specimen and other types of ichthyosaur.  Working with Professor Judy Massare (Brockport College, New York), Dean spent over five  years comparing and contrasting the Doncaster ichthyosaur that had been nicknamed “Fizzy” with other museum specimens from around the world.  Unusual features in the humerus and femur (upper limb bones) along with the humerus length to femur ratio led him to believe that the Doncaster fossil represented something not seen before.  Over 1,000 other Ichthyosaurus fossils were examined during the course of the research, a further four fossils (three most likely of juveniles), were identified as having the same anatomical features as “Fizzy”.

“After examining the specimen extensively, both Professor Massare and I identified several unusual features of the limb bones that were completely different to any other ichthyosaur known.  That became very exciting.  After examining over a thousand specimens we found four others with the same features as the Doncaster fossil.”

Professor Massare has worked on a number of ichthyosaur specimens, most notably a remarkable fossil found in Wyoming.  She used her knowledge of ichthyosaur anatomy and locomotion to compare and contrast the fossil material.  The strata from which this fossil was extracted dates from the Early Jurassic (Lower Jurassic – Hettangian/Sinemurian–Pliensbachian).  It has been estimated that this fossil material is around 189 million years old. (Pliensbachian faunal stage).  Most ichthyosaur fossils that date from this stage of the Jurassic are fragmentary, very few articulated specimens with cranial material are known.  The Doncaster fossil is the most complete ichthyosaur fossil that dates from this time interval.

The upper arm bone (humerus) is short and robust.  The femur (thigh bone), in comparison is very much smaller.  The morphology of the fossil specimens ascribed to this new species, suggest that there were differences in the limb bones of males and females.  Such differences have not been identified before in ichthyosaurs.  The species name pays tribute to Mary Anning (1799-1847), it was Mary along with other family members who found the fossils of the first scientifically described “fish lizard”.  The very first formal, academic paper describing an ichthyosaur was published in 1814, the study being based on fossil material found in the Lyme Regis area by the Anning family.  Last year, Everything Dinosaur wrote a short article commemorating the 200th anniversary of this event.

To view this article: Two Hundred Years of Ichthyosaurs.

“Mary worked tirelessly to bring ichthyosaurs, among other fossils, to the attention of the scientific world.  It is an honour to name a new species, but to name it after somebody who is intertwined with such an important role in helping to sculpt the science of palaeontology, especially in Britain, it is something that I’m very proud of.  In fact, one of the specimens in our study was even found by Mary herself!  Science is awesome.”

It has been a very busy couple of years for Dean, as well as helping to increase our understanding of British marine reptiles, in 2014, his book “Dinosaurs of the British Isles”, co-authored with Nobumichi Tamura was published.  This book provides a comprehensive account of the dinosaur fossils associated with the British Isles and we at Everything Dinosaur strongly recommend it to anyone with an interest in dinosaurs.

“Dinosaurs of the British Isles” – A First, Comprehensive Account of British Dinosauria 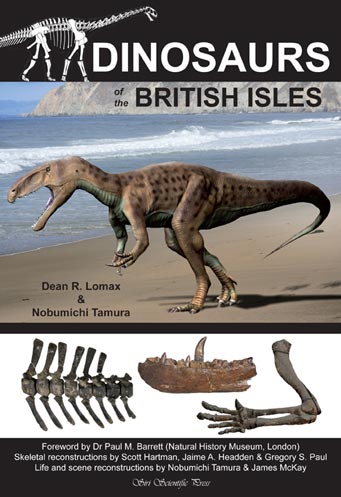 For more details about the book and to order a copy: Siri Scientific Press.

This new specimen, helps palaeontologists to understand in greater detail the evolution and radiation of the Ichthyosauria.  I. anningae adds to the number of Ichthyosaurus known from the Pliensbachian faunal stage.  There has now been recorded at least three species (possibly as many as five species) from this time interval.  This is significant, as the discovery of this new species falls between two of the three known major radiations of ichthyosaur genera.  The numbers and types of ichthyosaur seemed to have increased around 200 million years ago (Triassic/Jurassic boundary) – Neoichthyosaurian radiation.  A second major radiation occurred around 175 million years ago (Aalenian faunal stage), the ophthalmosaurid radiation, when many new kinds of “fish lizard” also evolved.