Key Stage One Children Learn All About Life in the Past

Children in Class 2 have been learning all about dinosaurs, prehistoric animals and life in the past.  Dinosaur fossils have even been found in Antarctica, a fact that the children in Miss Butterfield’s class now know as they made world maps and plotted where certain types of dinosaur lived.  Stegosaurus fossils have been found in the western United States, whilst the speedy Velociraptor lived in Russia, China and Mongolia.  Triceratops fossils are known from the United States of America and Canada.  As well has helping the children to learn about the continents and the countries of the world, the dinosaur term topic has been used to help the children explore the properties of different materials.

The classroom was filled with lots of wonderful models, posters and sculptures featuring dinosaurs.  The Year two children had been challenged to think carefully about the right media and what art materials should be used as they created and designed prehistoric animal figures and replicas.

Some Very Colourful Artwork on Display – Models Made by the Children The children had even made a “life-size” replica of the fearsome, meat-eating dinosaur Velociraptor (V. mongoliensis) and our fossil expert who visited the school to conduct a dinosaur themed workshop, was informed that Velociraptor was actually quite a small dinosaur about one metre tall and around two metres in length.  The children stated that the dinosaur was actually a lot smaller than the Velociraptors depicted in the movie franchise “Jurassic Park”.

A Velociraptor Sculpture in the Classroom On guard in the classroom. An amazing Velociraptor sculpture on display in a classroom.

Everything Dinosaur stocks a huge range of dinosaur themed toys and gifts including lots and lots of Velociraptor dinosaur models and replicas of other similar dinosaurs known as dromaeosaurids.

To view the range of prehistoric animal models (including Velociraptor), available from Everything Dinosaur: Dinosaur and Prehistoric Animal Models.

Learning All About Dinosaurs and Prehistoric Animals with Class Two

Children in Class Two study dinosaurs with the help of Everything Dinosaur.

A very busy morning with the Year 2 class at St Malachy’s R.C. Primary who have been studying dinosaurs and prehistoric animals.  The children had been learning all about when the dinosaurs lived, where they lived and how they became extinct.  Miss Butterfield and Mrs Parker had been teaching the children all about continents and countries and a most impressive map had been created which showed where in the world some dinosaurs lived. 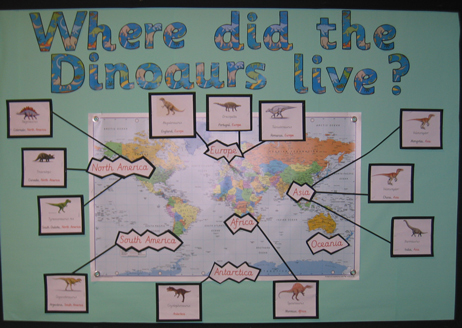 Where did dinosaurs live?

Can you spot a spelling mistake?  We wonder if any of the children have spotted the mistake, we think this is the teacher’s very clever way of encouraging the children to be observant.

As part of the ICT element of the curriculum for the spring term, the children had been making some dinosaur posters and learning how to copy and paste material from the internet.  Some lovely examples of posters were on display on the classroom wall and outside in the corridor.  They certainly brightened up the corridor.  Our dinosaur expert set the class some challenges, one of which was to come up with some science posters based on the information provided.  In addition, the children demonstrated their use of adjectives and we had some wonderful examples, especially when it came to describing the fossil teeth.

To cater for the design/technology (DT) and art elements of the curriculum, teacher Miss Butterfield, aided by Mrs Parker (teaching assistant) had been helping the children to design and create different prehistoric animal models, including a super sculpture of a fearsome Velociraptor.

A Wonderful Sculpture of a Velociraptor On guard in the classroom.

The children had to think carefully about which materials to choose and they had been challenged to use different media to create their prehistoric animal pictures.  We saw some lovely examples of artwork including a dinosaur called “Spike-0-saurus”, a very spiky dinosaur, hence his name. So many different types of dinosaur model had been made that some had even been put on display outside in the corridor.  It made our dinosaur expert feel very happy as he passed lots of models of stegosaurs on his way to the classroom.  The children compared parts of their bodies to the bodies of dinosaurs, some of the bones and casts that the children saw helped them to appreciate just how big some dinosaurs were.   It looks like Class 2 are having fun learning all about palaeontologists and life in the past.

To view the huge range of dinosaur themed toys and gifts available from Everything Dinosaur: Toy Dinosaurs and Gifts.