Did All Dinosaurs Have Feathers?

Kulindadromeus Discovery Gets Palaeontologists into a Flap

The embargo has been lifted and we can now talk about the amazing new fossil discovery from Siberia, details of which has just been published in the academic journal “Science”.  News of the discovery of the first ever plant-eating dinosaur with feathers as well as scales has been announced.  So what does this mean?  Feathered dinosaurs have been discovered before right?  True, but and it is a big “but“, feathers have only been associated with one group of dinosaurs up until now, the theropods, the group of dinosaurs most closely related to birds.

The dinosaur has been named Kulindadromeus zabaikalicus and at just over a metre in length, it is not going to be breaking any size records when it comes to extinct prehistoric animals.  Indeed, if we had the technology to travel back 175 million years or so, to the area surrounding what was to become the Siberian city of Chita, this little dinosaur would have probably gone almost unnoticed.  However, the publication of this long-awaited scientific paper is very important and over the next few paragraphs we will try to put this fossil discovery into perspective.

The Order Dinosauria (the dinosaurs) can be split into two distinct groups based on the structure and position of their hip bones.  These two sub-divisions are the Ornithischia (bird-hipped dinosaurs) and the Saurischia (lizard-hipped dinosaurs).  Those theropods many of whom were feathered, belong to the saurischians.   The Siberian fossils show that a member of the ornithischian group also had feathers.

Feathers Amongst the Dinosauria 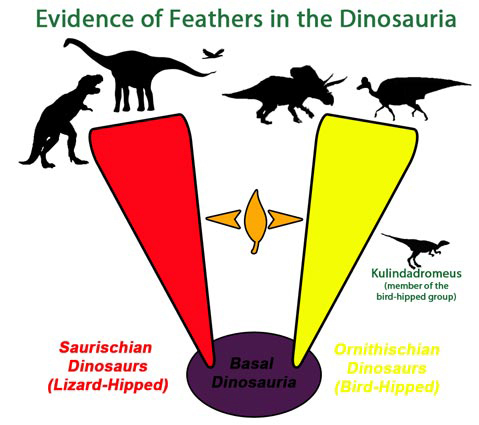 Ornithischians had feathers too.

The picture above shows the dinosaurs split into two groups, on one side of the dinosaur family tree are the lizard-hipped dinosaurs, the long-necked sauropods and the theropods, those mainly meat-eating dinosaurs who are the closest related to birds (Aves).  The other part of the Dinosauria consists of the bird-hipped ornithischians, an almost entirely vegetarian group consisting of the horned dinosaurs, duck-bills, armoured dinosaurs and such like.  Kulindadromeus, described as a neoornithischian dinosaur and definitely amongst the bird-hipped dinosaurs, shows that other types of dinosaurs, not just the theropods had feathers too.

The terms “bird-hipped” and “lizard-hipped” can be a little confusing, especially when we are trying to identify the ancestors of birds.  These terms were first coined by Henry Govier Seeley in 1887.  He divided the dinosaurs into two groups, based on the fact that all the dinosaurs known at the time (and the majority of dinosaurs discovered to date for that matter), had a pelvis that followed one of two distinctive shapes.  There was a bird-like pelvis, where the pubis bone points backwards and the lizard-hipped configuration where the pubis bone points forward.  It is the lizard-hipped dinosaurs,the theropoda, that are most closely related to the Aves and indeed one group of theropods, the maniraptorans that are the direct ancestors of today’s birds. 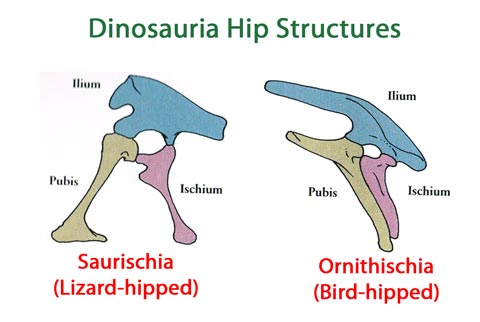 Back in 2010, a scientific team led by Sofia Sinitsa, a geologist at the Institute of Natural Resources, Ecology and Cryology from the Siberian city of Chita, explored some highly fossiliferous strata located in the nearby Kulinda valley.  The site represented a low energy depositional environment with freshwater crustaceans, insect larvae and plant fossils.  The strata was laid down by the edge of a large lake, evidence of ash in the layers of rock indicated that there were volcanoes in the neighbourhood too.  Fragmentary fossils indicating the presence of small dinosaurs were also discovered but their poor state of preservation led the scientists to focus on other fossil material.  Expeditions to the same locality found more fossils of dinosaurs over the next two summers and as a result, Pascal Godefroit, a palaeontologist at the Royal Belgian Institute of Natural Sciences (Brussels) was contacted along with other scientists as the implications of the discovery began to dawn on the Russian team.

“We were completely shocked by the discoveries.” A vast amount of fossil material was collected.

Bristle-like and brush-like structures had been identified in a number of Cretaceous species of ornithischian dinosaur, most notably in dinosaurs such as Psittacosaurus and Tianyulong, but these quills, brushes and bristles have been described by researchers as representing the very earliest development stage of feathers, what scientists call proto-feathers.

To read an article by Everything Dinosaur on the evidence of quills and bristles in later ornithischian dinosaurs:

Evidence of feathers in psittacosaurids: Upsetting the Apple Cart.

The scientists claim that these new fossils differ from the the bristle-like structures found in much later ornithischian dinosaurs as they have complex, multi-filamented structures typical of the feathers associated with the Theropoda.

Kulindadromeus zabaikalicus (pronounced Cul-lin-dah-dro-me-us zah-bay-cal-lik-us) had been named after the Kulinda valley locality and from the Greek “dromeus”, which means runner.  The trivial name honours the Zabaikal krai region of Siberia in which the Kulinda valley can be found.

An Illustration of Kulindadromeus zabaikalicus Dated to around 175 to 160 million years ago (Aalenian to Early Callovian of the Mid Jurassic), this one- metre-long plant-eater had filamentous structures covering most of its body, including its head, neck and chest.  The more complex feather-like structures are confined to the upper arms and upper legs, an arrangement found in a number of fossils of small theropod dinosaurs excavated from Cretaceous strata in the famous Lioaning Province of north-eastern China.

Explaining the significance of this discovery, Dr Godefroit stated:

“For the first time we found more complex, compound structures together with simpler hair-like structures in a plant-eating dinosaur that really resemble the proto-feathers in advanced meat-eaters”. Complex feather-like structures on the thigh.

The scientists are confident that these little, fast-running creatures could not fly, so why evolve feathers then?  The answer is quite simple, feathers first evolved for other purposes and they only became adapted for flight much later.  These feathers probably helped to keep these small animals insulated and warm.  This suggests that contrary to popular opinion, most dinosaurs were endothermic (warm-blooded  like mammals and birds) and not cold-blooded like today’s reptiles.  The longer, more complex feather structures may have had some role in display and visual communication.  In total, at least six fossil skulls have been found along with a large number of fossilised bones from many individuals and lots of different growth stages have been recognised.  The abundance of fossil material will give the palaeontologists the chance to study how feathers changed as animals grew and matured.

If this neoornithischian had complex feathers then this also throws up an intriguing set of possibilities.  The common ancestor of both the ornithischian and saurischian dinosaurs could have been feathered, or perhaps, feathers evolved in different types of dinosaur, an example of convergent evolution.

Chinese palaeontologist Xing Xu of the Institute of Vertebrate Palaeontology and Palaeoanthropology (Beijing), someone who has intensively studied the Lioaning feathered dinosaurs commented:

“The finds are a fantastic discovery”.

However, he warns against getting too carried away, stating that the fossils are too fragmentary to be certain that the more complex feathery structures actually correspond to those found later in birds.  We suspect that further research is going to be carried out into the nature of these branched integumentary structures, before palaeontologists will agree that feather-like structures were widespread amongst the Dinosauria.

One of the co-authors of the scientific paper, Professor Danielle Dhouailly from the Université Joseph Fourier in La Tronche (France ), has been examining these ancient structures and comparing them to the down and feathers found in modern birds.  The lake sediments also preserved scales, so scientists now have evidence that both scales and feathers could be found on individual dinosaurs.  In addition, scientists now know that the leg scales found in modern birds are essentially aborted feathers. Fossilised bone (sandy colour) surrounded by evidence of small scales on the foot.

“Developmental experiments in modern chickens suggest that  avian  scales are aborted feathers, an idea that explains why birds have scaly legs.  The astonishing discovery is that the molecular mechanisms needed for this switch might have been so clearly related to the appearance of the first feathers in the earliest dinosaurs”.

There is more research to be done, but this discovery has potentially huge implications for our view of the Dinosauria.  Ironically, back in the beginning of 2014, Everything Dinosaur team members were asked to predict what news stories might occur over the year and they did predict that a discovery regarding feathered ornithischian dinosaurs would be announced.

To read Everything Dinosaur’s full list of 2014 predictions: 2014 Palaeontology Predictions.

Team members congratulate all those involved in this exciting fossil discovery and the subsequent research.