Over the last twenty years or so, our knowledge about flying reptiles (the pterosaurs), has greatly increased, thanks to amazing, new fossil discoveries from countries such as Brazil and China and also as a consequence of sophisticated and innovative research carried out on a number of specimens housed in museum collections and this is a review of the recently introduced CollectA Quetzalcoatlus with prey prehistoric animal model.

Most flying reptile models depict these reptiles with their wings stretched out as if in flight, but this new replica bucks this trend by showing a Quetzalcoatlus on the ground, in a quadrupedal  pose.  Quetzalcoatlus fossils have been found in Texas and it was one of the very last of the pterosaurs, living at the end of the Age of Dinosaurs.

The CollectA Quetzalcoatlus with Prey Model A modern interpretation of a flying reptile.

Fossils of this pterosaur have been found in sediments that were laid down inland.  Palaeontologists have long debated how such a huge animal, with a wingspan in excess of ten metres, and standing taller than a giraffe, might have lived.  Perhaps, pterosaurs like Quetzalcoatlus filled the ecological niche of scavengers, like vultures do today.  An alternative view is that these large animals were active hunters, stalking the open plains and snatching up prey, just like Marabou storks do today in sub-Saharan Africa.

Did Large Azhdarchid Pterosaurs Stalk Prey on the Ground? 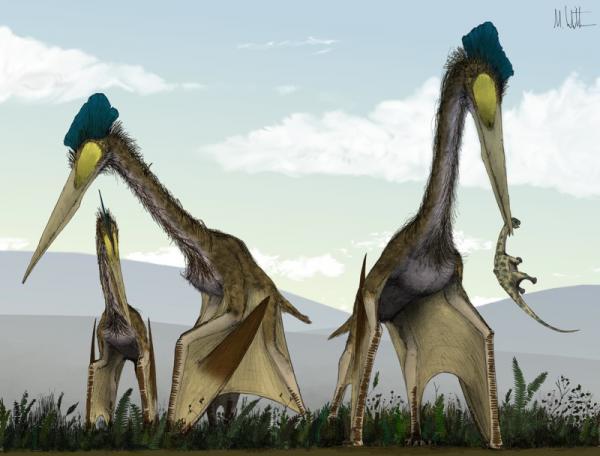 Some pterosaurs were as tall as a giraffe.

The model depicts Quetzalcoatlus having just grabbed a baby titanosaur, the titanosaur species is an Alamosaurus, a long-necked dinosaur whose fossils have been found in the southern United States in rocks that date to approximately the same time as the strata in which Quetzalcoatlus fossils were found.  The Quetzalcoatlus with titanosaur model, portrays this large pterosaur as an active hunter, although it is very likely that in common with most other carnivores, these reptiles would have fed on the carcases of dead dinosaurs too.  The titanosaur has been glued into the long beak,  however, we are aware of a number of model collectors who have carefully filed down the pegs that help secure the baby dinosaur in place, thus removing the titanosaur from out of the Quetzalcoatlus’s mouth.  The baby dinosaur can be removed but we would urge caution for anyone attempting to do this.

The Quetzalcoatlus with Prey (Close up) The model has been carefully painted, the body is brown in colour with a pale yellow underside.  The enormous beak has been painted mostly black, but it does reveal lots of detail, some flashes of colour for example, and the sculptors have been keen to depict the nostrils, these can be located roughly half-way along the beak’s length.  The folded wings are painted a battleship grey.

The body of this flying reptile has been textured to give the impression that it was covered in a shaggy, rough-looking coat.  A number of pterosaur fossils have now been excavated that reveal that these reptiles had bodies that were covered in hair-like structures.

The model measures around 12 centimetres tall, based on an adult azhdarchid pterosaur like Quetzalcoatlus standing close to 6 metres high, we estimate that this replica is in approximately  1:48 scale.  The head looks massive in comparison to the body-size and the tiny feet, however, these proportions are correct.  Pterosaurs like Quetzalcoatlus had the longest skulls of any terrestrial tetrapod.  This model is part of the huge CollectA prehistoric animal model series, this is a not-to-scale range of figures.

CollectA also make a number of scale model prehistoric animals, these are often referred to as “Deluxe”.  There is even a Pterosaur represented in this model series (Pteranodon).

Reflecting a Modern Interpretation of the Pterosauria This is a beautifully crafted, hand-painted replica of a Quetzalcoatlus with prey.  It is an exciting addition to the CollectA range of prehistoric animals and we at Everything Dinosaur send out a Quetzalcoatlus fact sheet with each model that we sell.

To view the CollectA range of not to scale prehistoric animals: CollectA Prehistoric Life Models.