The scientific paper has just been published that permits a new species of Torvosaurus to be announced to the world.  Torvosaurus means “savage lizard” and joining Torvosaurus tanneri, a meat-eating dinosaur known from the famous Upper Jurassic Morrison Formation of the United States, is T. gurneyi from the Lourinhã Formation of central west Portugal.  Based on the size of the skull material and using other fragmentary fossils from the Lourinhã Formation that had been found previously, palaeontologists estimate that this dinosaur measured around ten metres in length and weighed between four and five tons.  Based on these dimensions, this dinosaur can lay claim to the title of being one of Europe’s largest meat-eating dinosaurs described to date. Top predator of Portugal from the Late Jurassic.

Authors of the scientific paper, Professor Octávio Mateus and Christophe Hendrickx of the Museu da Lourinhã, (Lourinhã, Portugal), which has just been published on line in PLoS One, collated the known fossil material ascribed to Torvosaurus spp. found in Portugal and thanks to the discovery of part of a skull and jaws, they are able to distinguish this species from the Torvosaurus known from the United States.  A study of the fossils from Lourinhã reveal a number of differences between them and the North American fossil material.  For example, the near complete left maxilla ( a bone from the upper jaw), was found in Portugal by the Dutch amateur fossil collector Aart Walen in 2006.  It was carefully prepared and it was the finding of this fossil that really gave the Portuguese scientists the opportunity to compare their material with the fossils of Torvosaurus tanneri.

The maxilla in large theropod dinosaurs can be very characteristic, it helps to determine affinities amongst meat-eating dinosaurs and, importantly in this case, can help palaeontologists identify a new species.  When the Portuguese maxilla was compared to the maxilla of a Torvosaurus tanneri the researchers were able to point out some subtle differences.  For example, the maxilla of the Portuguese specimen had fewer teeth (less than eleven), this and other anatomical differences permitted the team to create a distinct Portuguese species of Torvosaurus.

Comparing the Left Maxilla of T. gurneyi with T. tanneri 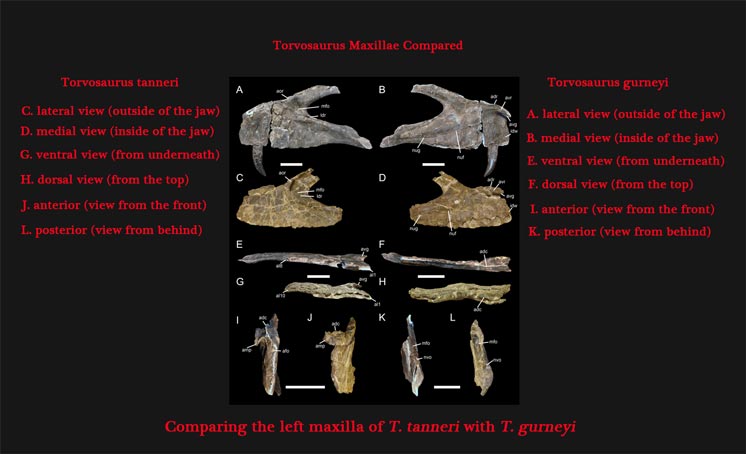 Picture credit: Journal PLoS One with additional notation by Everything Dinosaur

Although closely related to Torvosaurus tanneri, this new predator lived thousands of miles away on the eastern tip of the Eurasian and African landmass.  The species name honours the American artist and illustrator James Gurney who created the “Dinotopia” series of books all about a magical land where dinosaurs and people live together.  James Gurney was born in California and so from a geographical perspective he is much closer to the Torvosaurus known from the United States than from this new European dinosaur.

A Scale Drawing Giving the Approximate Size of T. gurneyi A scale drawing of Torvosaurus.

The drawing above gives an approximate size estimate for this new species of carnivorous dinosaur.  The maxilla is shaded red in drawing (A) and the scale bar is approximately 1 metre.  The other parts of the skeletal drawing shaded blue refer to fragmentary fossil material found previously that has been assigned to Torvosaurus gurneyi.  The skull drawing (B) indicates the position of the holotype left maxilla (ML1100) in relation to the rest of the skull.  The scale bar represents 10 centimetres.  Torvosaurus gurneyi has been assigned to the megalosaur family.

A trackway with individual prints measuring up to seventy-nine centimetres in length has been assigned to this new species.  Although it is very difficult to tie down the fossil print to a species, there is no other known Portuguese theropod of comparable size so these trace fossils have been attributed to T. gurneyi.  Dinosaur eggs and some fossilised embryos from the Sobral Member of the Lourinhã Formation have also been attributed to this new dinosaur species.

The fauna and flora of the Iberian area of Europe in the Late Jurassic was very similar to that found in the western United States, as epitomised by the Morrison Formation.  Both the Morrison Formation and the Lourinhã Formation sediments were laid down at approximately the same time, these strata cover the Late Oxfordian, the Kimmeridgian and the Early Tithonian faunal stages of the Late Jurassic.  However, during this period in Earth’s history the continents of North America and Europe were already separated by an intercontinental sea (the early Atlantic).  Professor Mateus and his colleagues put forward an hypothesis a few years ago now, that suggested that during the Early Oxfordian and the preceding faunal stage of the Late Jurassic, the Callovian, uplift of continental plates formed temporary land bridges between Europe and the Americas.  This allowed an exchange of terrestrial faunas between the United States and Iberia.  When these land bridges were lost as sea levels rose, these two, now separate ecosystems which shared common ancestors were left to evolve in isolation.

At Everything Dinosaur we are aware of the hyperbole that has surrounded the publication of the scientific paper on Torvosaurus gurneyi. It is certainly an impressive dinosaur and we do not dispute the size estimates (extrapolated from inferred skull size and skull size to body ratio) along with assigned limb bones and such like.  The left maxilla (ML1100) shows enough characteristics to allow a new species to be created, but the title of “Europe’s largest meat-eating dinosaur described to date”, is easier to justify than some of the other headlines used in articles.  For example, we have come across the misleading headline “Europe’s biggest dinosaur”, this is simply not true, many herbivorous dinosaurs were much bigger than Torvosaurus spp. and there are a number of fragmentary remains of meat-eating dinosaurs that could challenge the claim made by other writers that T. gurneyi is Europe’s biggest meat-eating dinosaur.  For example, the specimen of Baryonyx walkeri from the Wealden Clay of south-east England was not fully grown when it died and it could have potentially rivalled Torvosaurus in size.