Has a Tyrannosaurus rex Footprint been Found?

Despite Tyrannosaurus rex being so embedded in our popular culture we actually have very few fossils of this spectacular Late Cretaceous theropod.  Indeed, the whole family history of tyrannosaurs is still hotly debated and little understood.

No footprint has ever been ascribed to T. rex, however, Dr Phil Manning of the University of Manchester may have found one whilst studying Maastrichtian sediments in the Hell Creek formation of Montana.  Phil has high hopes that his 76 cm long three-toed footprint in a one square metre block could belong to a Tyrannosaurus rex.  However, as any ichnologist (specialist studying trackways); will tell you it is impossible to be certain what animal made the print – unless of course its fossil skeleton is found at the end of the trail.

Dr Manning commented that T. rex tracks had remained elusive for a hundred years and that you cannot say for definite what animal made them… but the print comes from the right age of rock (67 million years old).  Only two candidates are known from the fossil record that could make a print that size – T. rex and its close relative, although smaller Nanotyrannus.

Please note, the validity of Nanotyrannus as a genus is disputed.

An Illustration of a Nanotyrannus 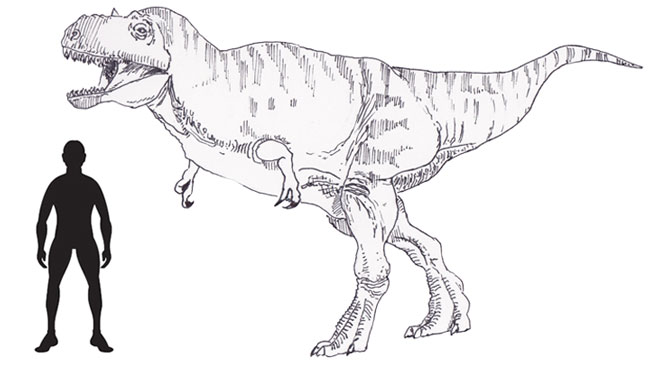 The picture above is an illustration of the PNSO Nanotyrannus model. To view the PNSO prehistoric animal model range: PNSO Dinosaur and Prehistoric Animal Replicas.

Phil’s evidence and research has yet to be peer reviewed but he remains optimistic that he has found the first Tyrannosaurus rex foot print.  Dr Angela Milner (Associate Keeper of Palaeontology at the Natural History museum), expressed interest in comparing the Hell Creek impression with a cast of a print discovered in Late Cretaceous rocks in New Mexico (1993).  This footprint was also of a large theropod, the print is actually 4 centimetres longer than Dr Manning’s find.  New Mexico is believed to be the southern limit of Tyrannosaurus rex’s habitat.

Isolated footprints can be helpful to palaeontologists but the real pay dirt would be an extensive trackway, from this evidence we can work out stance, posture, velocity, turning abilities, height, stride-length and so much more.  A set of T. rex footprints would yield a lot of fascinating information, especially if there were several tracks all of different sizes but heading in the same direction – strong evidence of Tyrannosaurus living in groups.