A team of international researchers including scientists from Leicester University, the University of Portsmouth and the University of Detroit Mercy, have published a paper in the academic journal “Nature” that concludes that the giant theropod Spinosaurus was indeed an aquatic animal.  In the autumn of 2014, a paper was published in the journal “Science” entitled “Semiaquatic adaptations in a giant predatory dinosaur”.  Spinosaurus was depicted as an obligate quadruped very much at home in the water.  In this latest publication, three of the authors involved in the earlier study, Nizar Ibrahim of the University of Detroit Mercy, Cristiano Dal Sasso and Simone Maganuco from the Natural History Museum of Milan (Italy), have collaborated with numerous other researchers in the analysis of Spinosaurus aegyptiacus tail bones.

The tail of Spinosaurus was unlike any other known theropod.  The fossil tail bones, indicate that the tail was wide, flexible and fin-like.  It seems very well adapted to propelling this huge dinosaur through water.  The researchers conclude that this is unambiguous evidence for an aquatic propulsive structure in a member of the Dinosauria.  In other words, Spinosaurus was very much at home in the rivers, swamps and lakes of the Cretaceous of northern Africa.  Here is one dinosaur that took to the water. A pair of spinosaurids hunting the giant, prehistoric sawfish Onchopristis.

The beautiful illustration (above), depicts Spinosaurus hunting the 8-metre-long sawfish (Onchopristis).  A partial fossil jaw found in 1975 (MSNM V4047), attributed to Spinosaurus had a vertebra thought to have come from an Onchopristis embedded within it.  Although, the vertebra is thought to have become lodged after the Spinosaurus died, it demonstrated that Spinosaurus and this giant prehistoric fish were contemporaneous.

Not All Dinosaurs were Entirely Terrestrial

Unlike a lot of Kem Kem fossil material from Morocco, the Spinosaurus specimen, which was discovered in 2015, with the tail section found in 2018, consists of numerous associated bones.  Most of the vertebrate fossils found within these deposits are isolated, but these caudal vertebrae with their tall neural spines and elongated chevrons, have permitted the researchers to reconstruct the tail and to test its swimming capabilities using robotic flapping apparatus that was built to model the tail’s morphology and motion.  The researchers conclude that the tail of Spinosaurus was long, strong, flexible and ideal for propelling this monster through water.  It is likely that these fossils will provide much more information on the enigmatic Spinosaurus, as the material represents the most complete theropod dinosaur found to date in northern Africa. 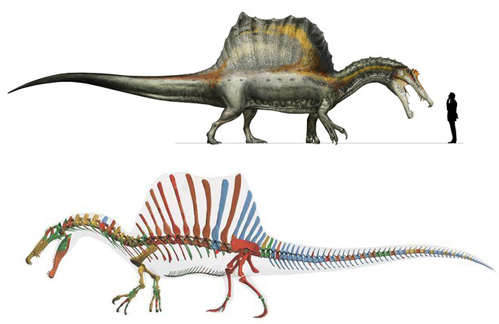 Life-size reconstruction and supplemental figure from the autumn 2014 scientific paper.

A Reconstruction of Spinosaurus aegyptiacus 2020 View of the crocodile-like snout of Spinosaurus and the new interpretation of the tail.

The Tale of a Tail

Note the differences in the shape of the tail between the 2014 reconstruction and the very much more fin-like 2020 reconstruction.  The tail of Spinosaurus aegyptiacus has been described as resembling that of a giant crested newt.

“The Spinosaurus’ fin-like tail is a game changing discovery for us that fundamentally alters our understanding of how this dinosaur lived and hunted – it was actually a ‘river-monster’.  As well as its tail, many other features of this dinosaur, such as the high position of the nostrils, heavy bones, short legs and paddle-like feet point to a life spent in the water rather than on land.   Not only did dinosaurs dominate the land and take to the air as birds, they even went back into the water and became the top predators there as well.”

Historically, some types of dinosaurs were associated with aquatic environments, for example, Jurassic sauropods and duck-billed dinosaurs such as Corythosaurus and Lambeosaurus.  However, these ideas have now been abandoned by most scientists and the Dinosauria is regarded as almost entirely terrestrial.  Recent studies have suggested that the enigmatic spinosaurids, dinosaurs such as Oxalaia, Irritator, Siamosaurus and Ichthyovenator along with Suchomimus, Baryonyx et al, may have been semi-aquatic.  This newly published paper demonstrates that Spinosaurus aegyptiacus possessed a number of anatomical adaptations indicating an aquatic habit.  In 2019, Papo introduced a new, limited edition figure of Spinosaurus, depicting this animal as a semi-aquatic, obligate quadruped. 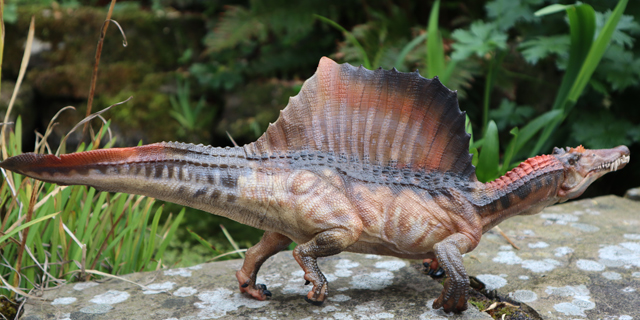 The Papo Limited Edition Spinosaurus dinosaur model (2019).  This Papo replica depicted Spinosaurus with a fin-like tail, ironically, this shape of tail has now been proposed by vertebrate palaeontologists. The tail of the Papo Limited Edition Spinosaurus dinosaur model (2019).

Implications for Other Members of the Spinosauridae

Spinosaurus aegyptiacus was one of the last of the spinosaurids.  The authors of the scientific paper postulate that other members of the Spinosauridae are thought to have had aquatic adaptations which suggests a substantial invasion of aquatic environments by this clade of theropods.

Our congratulations to the scientists for their research into this fascinating theropod, we look forward to further papers being published as the Spinosaurus material from the Moroccan site continues to be excavated.  Our congratulations to Papo, for producing a fantastic replica, that although might not depict the dinosaur as exactly as some palaeontologists might, but they do seem to have produced a tail that reflects the newly published scientific data.

Our review of the 2014 paper: Spinosaurus 2014 Scientific Paper Review.

To see the Papo range of prehistoric animal models including the limited edition Spinosaurus: Papo Dinosaurs and Prehistoric Animal Models.