The latest edition of “Prehistoric Times” magazine has arrived at the offices of Everything Dinosaur and team members have been perusing the extensive articles and features as well as admiring all the reader submitted artwork.  The front cover of this issue (131 – autumn 2019), features an illustration by the American artist Ray Troll.  The Alaskan-based illustrator has produced a number of illustrations for the magazine over the years.

The front cover depicts a member of the Desmostylia, an extinct group of placental mammals, that adapted to an aquatic existence.  This is in keeping with one of the featured prehistoric animals in the magazine – ancient hippos, although the Hippopotamidae are not closely related to the Desmostylia, which are in fact distantly related to the Order Sirenia (Sea Cows, Manatees and Dugongs). John Lavas continues his long-running series providing an in-depth assessment of the palaeoart of the influential Zdeněk Burian.  In part 13, he discusses how Burian depicted pterosaurs and the accompanying notes provide an insightful commentary.  Tracy Lee Ford outlines how views regarding the skull morphology of diplodocids and other sauropods has changed.  He looks at how the narial opening on the skull has been interpreted and examines the hypothesis that these dinosaurs had trunks.  This topic will be revisited in the next issue of “Prehistoric Times” along with a reconstruction of how the head was positioned in relation to the cervical vertebrae.  Look out for some fascinating insight into diplodocid occipital condyles!

Issue 131 also includes a short-story of a person changing into a salamander, new prehistoric animal models, book reviews (including “Dinosaur Facts and Figures – The Theropods” by our chums  Rubén Molina-Pérez and Asier Larramendi) and an update on dinosaur fossil discoveries.

To read Everything Dinosaur’s review of this book (the version published by the London Natural History Museum): The Encyclopedia of Dinosaurs – The Theropods

The Front Cover of “The Encyclopedia of Dinosaurs – The Theropods” The “Encyclopedia of Dinosaurs The Theropods” (front cover).  The American edition is reviewed in the magazine.

Recently, the United States Postal Service introduced a set of colourful stamps highlighting the iconic Tyrannosaurus rex.  The artwork for these four stamps was created by renowned artist Julius Csotonyi and issue 131 features an interview with Julius outlining how he got the commission, what other stamp projects he has been involved in and what inspired the four images that show T. rex at various growth stages.

Appropriately, the envelope that contained the magazine had all four of the T. rex stamps on it.

Four Stamps Depicting Tyrannosaurus rex Thanks to the U. S. Postal Service

Dinosaur stamps on the envelope that contained “Prehistoric Times” magazine.

Look out for some amazing reader submitted artwork including illustrations by JA Chirinos, Luis Rey, Fabio Pastori and the skeletal reconstruction of Deinocheirus by John Sibbick.  A detailed review of “terrible hand” – Deinocheirus mirificus, is provided by Phil Hore, who describes this bizarre theropod as a “Cretaceous Grizzly”.

An Illustration of Deinocheirus 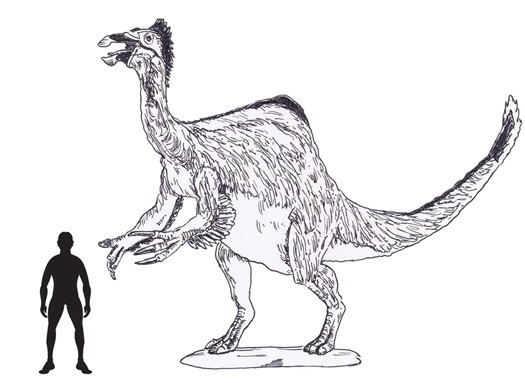 A scale drawing of Deinocheirus.

This magazine is certainly jam-packed with interesting articles, dinosaur fossil discoveries, research news and views and lots of well-written features.