In the Age of Dinosaurs the Trees were Giants Too

A team of international scientists writing in the open-access, on-line journal “Science Advances”, have published a paper detailing a new fossil assemblage that provides fresh insight into the prehistoric life of southern North America around ninety-two million years ago.  The fossils, which have been collected from several sites in Utah, come from exposures associated with the Upper Cretaceous Ferron Sandstone Member of the Mancos Shale Formation and they reveal a rich and diverse fauna and flora, including giant flowering trees (Angiosperms).

The fossils represent animals and plants that lived on a large, flat river delta close to the coast.  The fossil material associated with these strata represent terrestrial life such as dinosaurs, crocodiles and pterosaurs, plus the plants that made up the forests nearby.  In addition, some isolated sharks teeth have been found and other vertebrate remains in those rock units representing areas of the delta that were brackish and therefore closer to the sea.  The most significant find is also the largest specimen, a giant, petrified log that was approximately 1.8 metres in diameter and around 11 metres in length.  The researchers conclude that the log represents part of the trunk of a tree that may have been over 50 metres in height, making this Cretaceous giant, roughly the same height as Nelson’s Column in Trafalgar Square, London. Assigned to the Paraphyllanthoxylon Genus

The log was very probably transported some distance via the river before finally being deposited on the delta, where it became preserved as a fossil.  It is the largest known pre-Campanian Angiosperm and the earliest documented occurrence of a flowering tree more than one metre in diameter.  Leaf fossils and fossilised spore samples indicate a wide range of flora within the locality.  This ancient giant probably formed part of a forest canopy, beneath which, conifers, ginkgo trees and ferns along with other flowering plants thrived.  The fossil has been assigned to the  Paraphyllanthoxylon genus, as such, it is distantly related to numerous types of tropical flowering tree found today.

A Variety of Plant Fossils Have Been Found 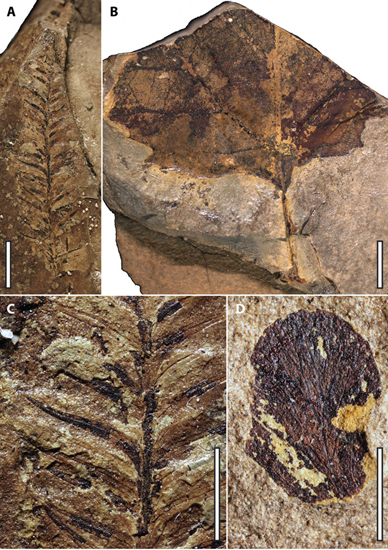 Several other plant fossils have been found from rocks associated with the Ferron sandstones, these fossils indicate the presence of a mixed woodland habitat.

The photograph (above) shows different types of fossil plant associated with the strata – (A) a leafy shoot identified as Elatides curvivolia (conifer), (B) the broad leaf of an indeterminate Angiosperm, (C) shows a close up of the E. curvivolia fossil.  Picture (D) shows an isolated fern pinnule.

Although only a few vertebrate fossils have been found, they hint at a rich and diverse biota.  Fossils of Therizinosaurs are known from Utah (Nothronychus spp.) and a partial, indeterminate, poorly preserved  Ornithopod sacrum was discovered along with isolated shark and crocodile teeth and a fragment from a turtle’s shell.  The rocks record life during the Turonian faunal stage of the Late Cretaceous.  Few Turonian-aged deposits are known from North America, it is known that there were exceedingly diverse regional faunas during the later Campanian and Maastrichtian faunal stages and it is hoped that by studying fossils from earlier, some insight into how these diverse communities came about could be gleaned from the information.  This newly described fossil assemblage from Utah will help to fill the gap in our knowledge of early Late Cretaceous terrestrial communities in North America.

Examples of Vertebrate Fossils from the Ferron Sandstone Member Examples of vertebrate fossils from the Ferron sandstone deposits of Utah.