Super-sized Otter as Big as a Wolf

South-western China some 6.25 million years ago (Late Miocene Epoch), was home to a giant river otter that grew to the size of a Grey Wolf.  That is the conclusion of a team of researchers which includes Dr Denise Su (curator and head of palaeobotany and palaeoecology at the Cleveland Museum of Natural History).  The new species, named Siamogale melilutra would have weighed around fifty kilogrammes, making it one of the largest otter species known to science.  The largest extant otter species is the South American Giant Otter (Pteronura brasiliensis), it can reach a similar size, but it is much more lightly built, weighing around two-thirds as much as the Late Miocene species. Yunnan Province (south-western China), in the Late Miocene was home to a giant otter (S. melilutra).

Otters are members of the Mustelidae family (weasels and their kin).  These agile, aquatic predators are grouped into a sub-family, the Lutrinae and there are around a dozen or so species alive today.  The fossil record for the Mustelidae (weasels, ferrets, stoats, polecats, minks, martens, badgers, honey-badgers, wolverines and otters), is relatively poor.  Siamogale melilutra belongs to an ancient lineage of extinct otters that was previously known only from isolated teeth from a different, much older species that was recovered in Thailand (Siamogale thailandica from the middle Miocene basin of Mae Moh in northern Thailand).

What’s so special about this new discovery is that researchers were able to recover a complete cranium, mandible, teeth and various post-cranial skeletal elements, providing a wealth of insight into the taxonomy, evolutionary history and functional morphology of this new species.

Dr Su, co-author of the paper published in “The Journal of Systematic Palaeontology”, explained:

“While the cranium is incredibly complete, it was flattened during the fossilisation process.  The bones were so delicate that we could not physically restore the cranium.  Instead, we CT-scanned the specimen and virtually reconstructed it in a computer.”

The Holotype Fossil Material of S. melilutra Cranium in Right Lateral and Dorsal Views with the Digital Reconstruction The scale bar in the above image is 30 millimetres.  The fossil skull is shown on the left (right lateral view top and dorsal view bottom), with the digital reconstruction of the fossil generated from the CT-scans.

The Phylogeny of Mustelidae

Where the otters sit on the Mustelidae family tree has long been debated.  Since most of the Mustelidae fossil record is very poor, palaeontologists have struggled to assess taxonomic relationships.  The digital reconstruction of the crushed and flattened skull revealed that Siamogale melilutra had a combination of otter-like and badger-like characteristics, hence the species name “melilutra” which is derived from the Latin for otters (lutra) and the Latin for badgers (meles).

Siamogale melilutra had a large, powerful jaw with the enlarged, bunodont (rounded-cusped) teeth typical of many otter lineages.   It has been suggested that this giant otter specialised in eating freshwater mussels and clams, using its strong jaws to crack open the shells.

The discovery of this fossil material raises the question of whether these bunodont teeth were inherited by all otters from a common ancestor, or evolved independently in different otter lineages over time because of the evolution of similar adaptations to thrive in similar environments, an example of convergent evolution.   Dr Su and her co-workers which included Dr Xiaoming Wang (Dept. of Palaeontology at the Natural History Museum of Los Angeles County), through their analysis, found that bunodont teeth independently appeared at least three times over the evolutionary history of otters, suggesting convergent evolution to be the cause.

A Skull Size Comparison Between S. melilutra and P. brasiliensis and Lutra lutra The completeness of Yunnan province specimen allows researchers to better understand the evolutionary history of otters, however, lots of questions about this super-sized river otter remain.

Dr Su summed up the questions that the researchers would like to answer:

“Why did this species grow so large?  How did its size affect its movement on land and in water? And most importantly, what types of advantages did its size give?”

Although, much larger than modern-day otters, Siamogale melilutra is not the largest otter known from the fossil record.  Fossils of a much bigger “bear-otter” have been recovered from the Hadar Formation of Ethiopia.  The enormous Enhydriodon dikikae, would have been familiar to our hominin ancestors and it is estimated to have reached a total length in excess of two metres and weighed perhaps as much as 180 kilogrammes. 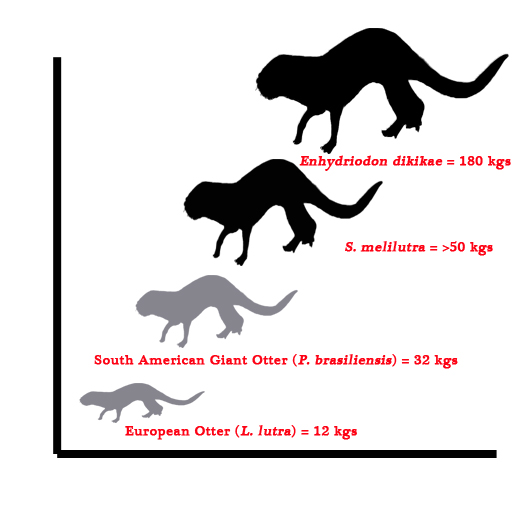 Everything Dinosaur acknowledges the help of the Cleveland Museum of Natural History in the compilation of this article.

The scientific paper: “A New Otter of Giant Size Siamogale melilutra sp. nov. (Lutrinae: Mustelidae: Carnivora), from the latest Miocene Shiutangba site in north-eastern Yunnan, south-western China, and a total-evidence of phylogeny of Lutrines.” published in “The Journal of Systematic Palaeontology”.