Earlier this month, a member of the Everything Dinosaur team visited Abercrombie Primary School in Chesterfield (Derbyshire), as part of two days of science study with Year 2, 3, 4, 5 and Year 6.  Over the course of the workshops we conducted, we set a number of challenges for the classes.  One challenge was to have the children “design their very own prehistoric animal”, with a new dinosaur species being named, on average, every three weeks or so, there is plenty of scope for new dinosaurs.  Another challenge involved the children writing Everything Dinosaur a thank you letter, from our bulging mail bag on Friday, it looks like lots of the pupils at the school took up the opportunity to send in examples of their work. Our thanks to Henry, Daisy, Frasier, Sophie, Ebony, Daisy, Reuben, Lucy, Daniel, Ibrahim, Alfie, Holly, Noah and all the other children who sent in super prehistoric animal drawings, they are certainly very colourful.  The children have thought very carefully about their prehistoric animal designs, considering where the animal might live, what it might eat and how it would keep itself safe. We enjoyed looking at all the prehistoric animal pictures that had been sent into us by the children.  Some of the dinosaur names the children had invented were very creative such as “Hungry eater steeler” from Leo and we even had a drawing of Indominus rex from the film Jurassic World.

Thank You Letters Sent to Everything Dinosaur

The hand-writing challenge involved composing a thank you letter to Everything Dinosaur and sure enough we received a set of beautiful and well written thank you letters, some of which had even been illustrated.

Thank You Letters Sent in by the Children (Abercrombie Primary School) Pupils sent in thank you letters to Everything Dinosaur.

Our thanks to Ali, Dexter, Oliver, Libby, Alice (yes, you are quite right fossils are usually found in sandstone and limestone), Erin and Harry (wonderful dinosaur skull drawing).

Isobel wanted to know how long have we been looking for fossils?  Everything Dinosaur team members found their first fossils when they were not much older than Georgia or Felix.  Louie wrote to say that he was sorry to have missed all the dinosaurs as he had been ill but he did send in a nice letter and even took the trouble to draw some dinosaur eggs.

Cole Sent in a Beautiful Thank You Letter 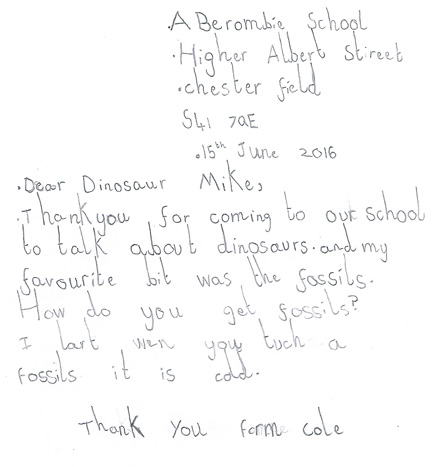 A thank you letter from a pupil at Abercrombie Primary.

The question was asked, how do you get fossils?  Fossil can be found in lots of places but most fossils are found in rocks and one of the best places to find them is at the seaside.  Arthur wrote in to say that his favourite part was holding the Tyrannosaurus rex tooth and he also liked the stickers we gave him.

A special thank you to all the children at Abercrombie Primary who sent in letters and pictures.