Team members at Everything Dinosaur have been able to get up close to the five new prehistoric animal models to be added to Papo’s exciting model portfolio this year.  We have already reported on three of the models, namely the feathered Velociraptor, the new version of the Tyrannosaurus rex and the impressive Papo Baryonyx which should all be with us in just a few weeks time.

To read the report: Excitement Builds for New Papo Dinosaurs.

However, we want to turn our attention to the other two models which Papo intend to release later in the year.  Time to show some photographs and comment upon the new for 2016 Papo Kaprosuchus and the re-painted Velociraptor replica. This really is the pick of the bunch, when it comes to the new model introductions this year.  It is a wonderful figure, a fantastic replica of the Cretaceous crocodile Kaprosuchus (K. saharicus).  This fast-running ancient predator certainly captured the imagination of dinosaur fans when it was formally described back in 2009.  West Africa 95 million years ago, must have been a very scary place with the likes of Kaprosuchus on the prowl.  The model reminds us of the Papo Nile Crocodile figure, but the teeth and the limb position are all “Boar Crocodile” that’s for sure.  The figure measures 23 centimetres in length, but naturally, had that impressive and powerful tail been stretched out behind the model, it would have been a lot longer.  Based on the known fossil record, Everything Dinosaur estimates that this prehistoric crocodile figure is in approximately 1:20 scale. A number of Papo prehistoric animal models have articulated jaws, but unlike them, this figure does not have an articulated lower jaw.  In this instance it is the upper that is articulated.  Once the mouth is opened those magnificent teeth are revealed in all their glory.  The attention to detail does the team at Papo great credit.

New for 2016 the Papo Green Velociraptor

As well as introducing a feathered Velociraptor model this year, (see yesterday’s blog article), Papo will be adding a green version of their existing Velociraptor model.  The model has been painted with a distinctive green hue.  Team members at Everything Dinosaur have already nick-named this dinosaur “Echo” in honour of one of the “Jurassic World” raptors. 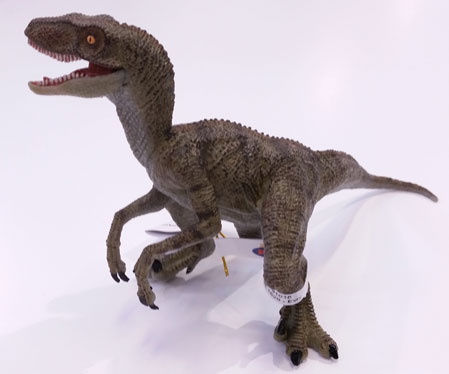 A new Velociraptor figure from Papo for 2016.

Good news, for dinosaur fans, the introduction of this colour variant does not spell the end for the existing Papo Velociraptor (Everything Dinosaur product code MOPA011, Papo model number 55023), there are no planned retirements from the Papo range this year.  Everything Dinosaur will therefore be stocking all three Papo Velociraptor models in 2016.

Both the Papo Kaprosuchus and the Papo green Velociraptor models are expected sometime in quarter 2 of this year (around June or perhaps July or even earlier).  We are eagerly awaiting the arrival of these models in our warehouse.