A team of international scientists including researchers from the University of Bologna (Italy), the University of Alberta (Canada) and the Office National Des Mines, Service Patrimoine Géologique (Tunis, Tunisia), have announced the discovery of the fossilised bones of a huge prehistoric marine crocodile, the largest member of the Teleosauridae (marine crocodyliforms), described to date.  The ancient crocodile provides proof that these types of marine reptile did not become extinct at the end of the Jurassic.

An Illustration of the Super-sized Marine Crocodile (Machimosaurus rex) The fossil material which includes a nearly complete skull plus post cranial elements such as ribs, cervical and dorsal vertebrae plus one bone from the forelimbs, comes from Lower Cretaceous rocks of Tataouine (southern Tunisia).  The giant crocodile, named Machimosaurus rex was probably an ambush predator of the lagoonal environments on the shores of the Tethys Ocean.  It lived approximately 130 million years ago in the Early Cretaceous (Barremian faunal stage of the Cretaceous).

A scale drawing showing known fossil material and close up of the skull (dorsal view).

At an estimated ten metres in length, and perhaps weighing more than three tonnes, not only is this the largest marine crocodile known to science, but it is also the largest crocodylomorph known from the Barremian faunal stage.  There are larger crocodiles known from the fossil record, Deinosuchus of North America and Sarcosuchus from Africa for example, but these animals lived later in the Mesozoic.  Machimosaurus rex with its skull measuring 160 centimetres in length, was certainly bigger than any extant crocodile.  The relatively short snout and the shape of the teeth (blunt and bullet shaped), suggest that this big “croc”, like many other members of the Machimosaurus genus, specialised in hunting turtles, but it may also have ambushed unwary dinosaurs and other animals should they have got too close to the water’s edge.

Field Team Members Pose with the Skull in Situ The field team pose with the fossilised skull.

A Skull Bigger than Tyrannosaurus rex

The Machimosaurus genus contains a number of species, most of which were named and described in the 19th century.  Their fossils are widespread with specimens having been recorded from Switzerland, France, Germany and England, although the Tunisian specimen is the only one known from Cretaceous strata.

University of Alberta PhD student Tetsuto Miyashita, a co-author of the scientific paper that was published this week in the journal “Cretaceous Research” stated:

“These teeth weren’t for cutting or piercing flesh.  They were built for crushing bones.”

Hence the speculation that along with other machimosaurs, this crocodile specialised in hunting and eating turtles.

This part of Tunisia remains relatively unexplored and fieldwork was difficult as the region is politically unstable.  However, the scientists hope to be able to return to the area in the near future to look for more post cranial material and to search for evidence of other vertebrates that shared this crocodile’s watery habitat.

“The fossils indicate that M. rex belonged to a group of crocodiles that inhabited the sea and coastal areas around the end of the Jurassic Period, but the species is not directly related to modern-day crocodiles.”

Surviving into the Cretaceous

It had been thought that the teleosaurids had died out at the end of the Jurassic, but the discovery of Machimosaurus rex refutes this hypothesis.  It seems likely that the paucity of the fossil record for these types of crocodiles from Gondwana may have skewed the data to suggest that these marine crocodiles became extinct at the end of the Jurassic.  Although, local extinction events may have occurred, it seems likely that more fossils of crocodylomorphs that get assigned to the Machimosaurus genus will be found in Cretaceous-aged rocks. 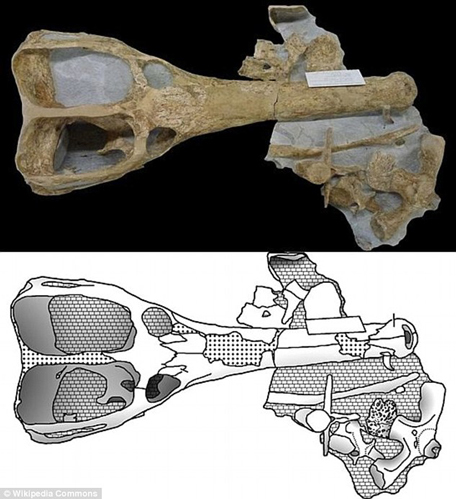 Typical skull material assigned to the Machimosaurus genus and line drawing (below).

Palaeontology can Sometimes be a Dangerous Business

This part of Tunisia remains politically unstable and field work has been hampered, but members of the research team are hopeful that they will be able to return to complete their survey of the area.  Sadly, barely a week after the field team left Tunis then ISIL inspired terrorists attacked the Bardo National Museum in Tunis (18th March 2015), killing more than twenty people and injuring a further forty-two.

Reflecting on the current troubles in that part of the Arab world, Tetsuto Miyashita said:

“Sometimes we are reminded that our endeavour to unlock the ancient mysteries is only possible through peace, freedom and sheer goodwill of people.  We were touched by the kindness and hospitality of Tunisians when we were there.  Nothing could make me happier than us working together again to get to that big monster.”