Back on July 24th, Everything Dinosaur reported on the publication of a scientific paper that provided an insight into how snakes evolved from limbed ancestors.  The fossil of a snake-like creature with four tiny legs had been spotted on a tour of a German museum quite by chance.  It’s significance had not been realised until Dr. David Martill (University of Portsmouth), spotted the beautifully preserved fossil whilst taking a party of his vertebrate palaeontology students on a visit to Germany to explore some of the country’s natural history museum fossil collections.

The unique specimen is believed to have been excavated from the Crato Formation of north-eastern Brazil.  The animal has been named Tetrapodophis amplectus , the name means “four-legged” embracing snake”, as the limbs probably did not have much of a locomotive function but probably served as claspers in mating or helping to control and manipulate prey.

With the paper published, a legal dispute has arisen with the Brazilian authorities and an investigation has begun to try to understand more about the provenance of the fossil material.  Brazil made it illegal in 1942 to sell or export fossils without the express permission of the Government.  The snake fossil was part of a private collection on display at the famous Bürgermeister-Müller-Museum in Solnhofen.  This museum, based in southern Germany, has amongst its fossil collection, spectacular Late Jurassic fossil specimens preserved in fine-grained, lithographic limestone. By chance, during Dr. Martill’s visit, the museum was putting on an exhibition of Cretaceous fossils from similar strata, but this time from Brazil.  Both the slab and the counter slab are known, but their exact provenance remains a mystery.  That’s the problem, it may have been collected prior to the Brazilian legislation, or perhaps it was collected after 1942, nobody is really sure. Picture Credit: Dr. Dave Martill/University of Portsmouth with additional annotation by Everything Dinosaur

The Brazilian officials are keen to investigate to try to determine whether the snake fossil was taken out of Brazil illegally.  If this is the case, then they may have grounds for repatriation.

Commenting on the situation Felipe Chaves, (Head of the Fossil Division of the Brazilian National Department of Mineral Production, based in Brasilia), stated:

“We will formalise the request for an investigation with the Brazilian Federal Police, in order to ascertain how this fossil specimen left Brazil.  We know some details that merit being investigated.”

The twist in the tale highlights a major problem in palaeontology.  How much responsibility can scientists take when it comes to upholding the legality of the fossil specimens that they study?

Unfortunately, fossils, especially those of vertebrates, can fetch high prices.  There is a black market of illegal fossil material and many collectors are prepared to pay large sums for exquisite specimens.  This encourages the illegal excavation and trading of such artefacts.  There are a number of countries that have established tough laws to try to prevent the smuggling of fossil material, but there is a lot of evidence to suggest that illegal selling is still widespread.

To read an article about the seizing of a dinosaur fossil skeleton (T. bataar) that was put up for sale at a New York auction: U.S. Authorities Seize Dinosaur Fossil at the Centre of Auction Row

Dr. Nicholas Longrich, a palaeontologist at the University of Bath and a co-author of the fossil study stated:

“Personally, I would have liked to see the fossil go back to Brazil, but it wasn’t my fossil and so it wasn’t my choice.  We did discuss at length whether the specimen should be returned, given that we were uncertain about when it left, but the counterargument was that there was no evidence to suggest that any laws had been broken.”

It was only when the scientific paper describing the snake fossil was published in the academic journal “Science”, that Brazilian Government officials became aware of the fossil’s existence. Felipe Chaves suggests that the research team should have informed the relevant authorities when they considered that this specimen most probably came from Brazil.  However, Dr Martill, the lead author of the Tetrapodophis scientific paper sees no need to do this.

“There are hundreds, if not thousands of Brazilian fossils [in museum collections] all over the world.  It is a bit distracting if scientists have to mess about with the legality of fossils before they study them.  I see thousands of fossils every year from all over the planet.  I am not going to write to the governments of all those countries just to check each and every fossil.”

Looking at the Wider Point of View

Protectionist laws are in place in a number of countries, most notably China, where significant steps have been taken to try to reduce the smuggling of fossil material out of the country.  Such restrictions can hamper the collection and study of fossil specimens, but at the same time there is a need to protect a country’s heritage and to crack down on criminal activities. 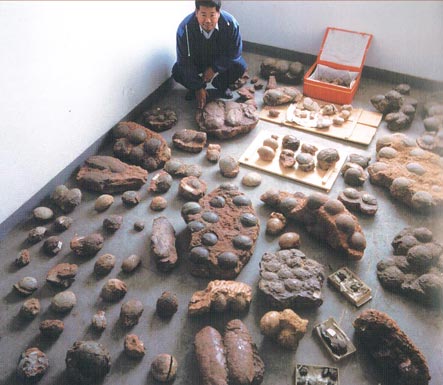 Fossils from private collections often cause the greatest concern.  It can prove very difficult to establish how or when a fossil specimen was acquired.  However, should researchers publish data on fossils that may have been obtained illegally.  A number of academic journals produce guidelines to help clarify the situation, at least in so far as publishing a scientific paper.  For example, the academic journal “Cretaceous Research”, provides assistance to authors by noting in its author guidelines that papers on fossils of uncertain origin will not be accepted for publication, even if they are part of a museum’s collection.  The specimens must have unambiguous collection or ownership data associated with them.

Given the wealth of vertebrate fossil material from the Crato and Santana Formations of Brazil in museums, it is doubtful whether the Brazilian investigation will make much progress.

“We can see both sides of the argument. Firstly, there is the desire to have controls on the exportation of fossil material and other artefacts from a country.  Retaining fossils in their country of origin can do much to encourage science education and research in that part of the world.  However, it is important to allow the continuation of research into fossils housed in various collections around the world even if their provenance can be described as a bit “murky”.  The important thing is to deter illegal collecting whilst at the same time encouraging a more open attitude towards scientific study.  Owners of private collections may be tempted to hide their collections away, thus denying scientists the chance to access them and to conduct research.”

To read an article about the return of Chinese fossils by American Customs officials following a number of seizures: Returning Contraband to China