New Releases from CollectA for 2015 and Model Measurements

Those clever people at CollectA have released the second batch of new additions to their “Prehistoric Life” model series (new CollectA models for 2015).  These are all models that will be stocked by Everything Dinosaur in 2016.  In this short article, we provide pictures of the new models and update readers on the dimensions of all the 2015 releases to date.

So let’s jump straight in.. 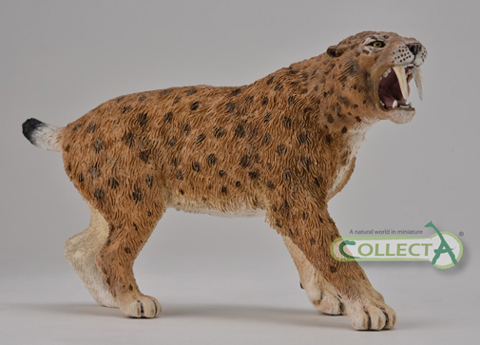 This is a very well designed model of a Sabre-toothed cat.  The replica measures a little under 13 cm in length and the head stands around 8 cm high.  The model is in the not-to-scale range and Everything Dinosaur believes it is a replacement for the earlier Smilodon model introduced a few years ago.  This earlier Smilodon is likely to become a rare model so Everything Dinosaur urges collectors to acquire this replica before it is officially retired.

To view the range of prehistoric mammal models and figures offered by Everything Dinosaur: Models of Prehistoric Mammals.

Let’s retain the prehistoric mammal model theme and discuss the entelodont replica, the 1:20 scale model of Daeodon.  This model will also be available from Everything Dinosaur in the late spring of 2015. Soon to be available from Everything Dinosaur.

This beautifully painted model of a “war pig” as we like to call it measures a fraction under 16 cm in length and the height of the hump is 9.5 cm off the ground.

Sticking with the Deluxe range, another new addition, in what will be termed the Supreme Deluxe range and available from Everything Dinosaur in the late spring of 2015 is this excellent model of the pterosaur called Guidraco.  This is in approximate 1:4 scale and the model measures 25 cm long and it stands approximately 25 cm high.  This replica will have an articulated lower jaw. The colour scheme has been based on an Atlantic Puffin (Fratercula arctica), one of our favourite sea birds.  Guidraco (fossils from the famous Lioaning Province of China), like the Puffin, was believed to be a fish-eater.

The Wonderful Model of the Guidraco Pterosaur Available from Everything Dinosaur in late spring 2015.

Super colours on this pterosaur replica.  The model will also feature an articulated lower jaw.

Another addition to the Deluxe range is this replica of the theropod dinosaur Acrocanthosaurus. This model measures a fraction under 30 cm in length and the head height is around 12 cm.  It is slightly smaller than the Deluxe Feathered T. rex from CollectA that is also due out next year (see below). The model looks fantastic, the colouration is based on the juvenile feathered T. rex replica that came out this year. To view the CollectA range stocked by Everything Dinosaur: CollectA Models Prehistoric Life.

Last week, Everything Dinosaur team members posted up images and further information on the first of the 2015 model releases from CollectA.  To view this article: First Pictures of New Collecta Model Releases.

Here are the measurements of the models we featured:

This model measures 31 cm in length and that bulky body stands around 6 cm high.  The replica is based on a Dorset fossil specimen, a spectacular pliosaur known as P. kevani which is known from a two-metre- long skull and jaw currently on display at the Dorset County Museum.  This Pliosaurus has Sea Lampreys attached to it. Although, we at Everything Dinosaur, are not aware of any fossil evidence to suggest Lampreys attaching themselves to marine reptiles, since a number of Sea Lampreys feed on cetaceans in coastal waters today, it is likely that these ancient, jawless fish fed on the giant marine reptiles of the past.