Getting to Grips will all those Long Animal Names

Over the last few weeks or so, team members at Everything Dinosaur have had a number of requests for information regarding prehistoric animals recently seen in the BBC television series “Planet Dinosaur”.  We have provided assistance and advice but we have had many requests for help with pronunciation, not only for the dinosaurs featured in the six-part series but also for the prehistoric animals that appear in the book that accompanies these programmes.

We have gone through all our notes and documents related to these programmes compiling a list of the extinct animals featured, their names, how to pronounce them and an explanation of the name’s meaning.  We intend to publish this pronunciation list in three parts, as there are so many different creatures to consider.

The first part of the list is published below.  This list covers animal names from A-D, the rest of the list will be published in the next few days or so. 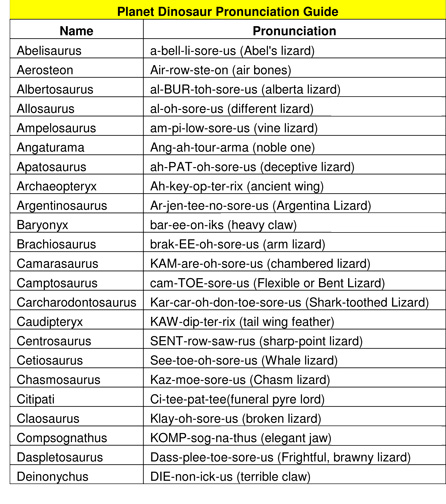 Prehistoric animals from A to D. – a pronunciation guide.

Hope this helps, a dinosaur pronunciation guide from Everything Dinosaur team members.

For models and replicas of prehistoric animals including many of the extinct creatures that featured in the television documentary series: Prehistoric Animal Figures and Dinosaur Models.