Save the M5 Dinosaur

Owner of T. rex Sculpture Vows to get Dinosaur Up Again

The owner of a giant Tyrannosaurus rex sculpture that used to brighten the journeys of holiday makers as they made the long trip down the west country heading for Devon and Cornwall has vowed to get his dinosaur on its feet again after it was damaged by vandals.

The fearsome beast used to stand overlooking the M5 motorway near to North Newton (Bridgwater, Somerset) but vandals maimed the £7,000 artwork, this is just one of a number of recent cases were artworks, sculptures and other installations have been attacked and vandalised.

Tyrannosaurus rex always tops the annual Everything Dinosaur poll which surveys prehistoric animal trends and attempts to find out which is the most popular of all the dinosaurs with boys and girls.  On hearing about the demise of the twenty foot sculpture, a spokes person for Everything Dinosaur commented:

“It is such a shame.  We know the dinosaur cheered up families as they drove down the motorway, many children used to try to be the first to spot it as they sat in the back of the car.”

Benjamin Slade, the owner of the sculpture said he would “not surrender” and has vowed to prevent at least this T. rex from becoming extinct.  A Facebook campaign has been launched called “Save the M5 dinosaur” in a bid to help restore this iconic feature just off junction 24 of the motorway.

Mr Slade, who owns the nearby Maunsel House, said:

“We have got to get a new monster.  I’m going to get one specially made, with sharper teeth.”

Tyrannosaurus rex was one of the last of the dinosaurs to evolve, and one of the largest land carnivores known from the fossil record.  Although the tyrannosaurids only became the iconic, apex predators towards the end of the Cretaceous with animals such as Gorgosaurus, Daspletosaurus and T. rex itself, this group of dinosaurs originated in the Middle Jurassic and seem to have been geographically very dispersed.  However, it was only in the Northern Hemisphere that the tyrannosaurs evolved into the large and fearsome monsters so often seen in movies and on television.  Tyrannosaurus rex models are extremely popular amongst dinosaurs and collectors.

A Model of Tyrannosaurus rex 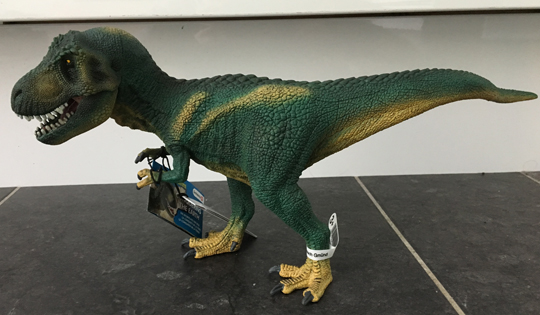