Whilst going through all the images of the new for 2020 prehistoric animal and dinosaur models from Schleich, a team member found this rather fun publicity photograph that had been produced by the German manufacturer.  Dinosaur and prehistoric animal models are certainly great for imaginative, creative play. 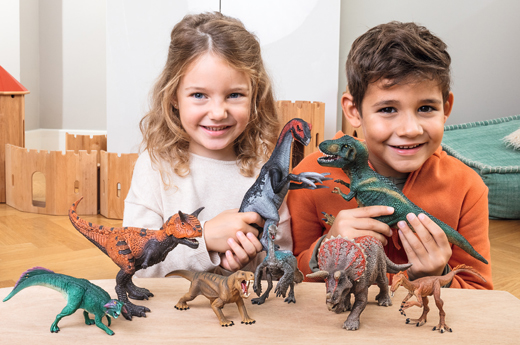 Children playing with dinosaur and prehistoric animal models.  The image (above), shows eight figures from the Schleich “Dinosaurs” model range.  To be accurate one of the models is not a dinosaur, can you name them all?

The photograph (above) shows two children and eight figures from the Schleich “Dinosaurs” model range, although, to be entirely accurate only seven of the models represent members of the Dinosauria.

Here is the list of models featured (reading from left to right):

To view the range of Schleich prehistoric animal models including the new for 2020 figures available from Everything Dinosaur: Schleich Dinosaur and Prehistoric Animal Models.