Sabre-Toothed Kittens and Their Strong Arms

A new study undertaken by scientists from California State Polytechnic University, the University of Wisconsin and colleagues at Bristol University, has concluded that Smilodon (S. fatalis), kittens were born with strong arms, stronger than similarly-sized modern big cats.  However, their pattern of bone development was congruent to other members of the Felidae.

Strong Kittens Grew up to be Strong Cats

The Treasure Trove of Fossils at La Brea

Using the extensive Smilodon fossil record preserved at the La Brea Tar Pits (Los Angeles, California), the researchers measured the limb bones of these big cats.  Only unbroken limb bones were included in the growth analysis.  Fortunately, given the huge number of Smilodon fossil specimens associated with this natural predator trap, the researchers, which included Donald Prothero, the author of “The Princeton Field Guide to Prehistoric Mammals”, that Everything Dinosaur was invited to review earlier this year* had a substantial data set to study.  For example, the scientists included thirty, Smilodon upper arm bones (humeri) representing cats at various growth stages in this study.  Their ontogenic analysis revealed that young animals had thicker and more robust bones than other members of the cat family (Felidae).  The bones did not become more robust as the cats grew, it seems Sabre-Tooths were born with big, strong arms. 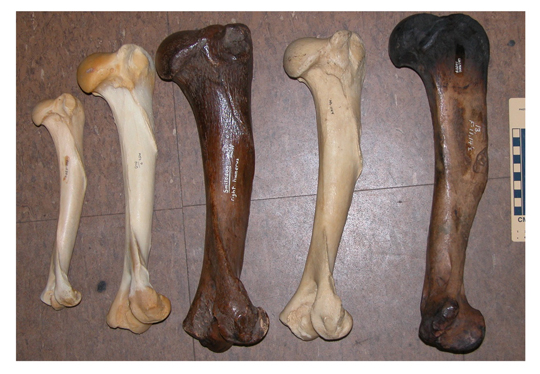 Comparing the humeri of extinct and extant big cats.

The photograph shows a comparison of five big cat upper arm bones (the humerus).   The bones come from adult animals and provide a visual guide to the forelimb size of large felids.

How Did the Limb Bones of Smilodon fatalis Change as the Cats Aged?

The research team discovered that whilst the arm bones of Smilodon, were more robust than those or extant big cats, they did not become more robust as the cats got older.  Smilodon kittens had big limb bones to begin with.  Mapping the bone growth (ontogeny), using the many specimens representing animals of different ages from the La Brea fossil collection, the team found that Smilodon grew in a similar way to other, primitive members of the Felidae and in the same way that many living cat species do today.  The bones lengthen and become more slender before they thicken.  This study, published in the on-line, open access journal PLOS One suggests that Felidae growth and development is much more constrained than previously thought, even in genera with very different morphotypes and bone structures.

Comparing the Radii of Big Cats (Living and Extinct) Comparing the radius of extinct and extant cat species.

The photograph (above) shows the radii of the five species of big cat, laid out in the same order as the photograph which showed the humeri.  The radius is one of a pair of bones found in the forearm, it is the bone that is lateral to the body (facing the outside).

“Sabre-Tooth cats have extraordinarily strong front limbs for tackling and subduing prey before they slashed their throats or bellies with their sabre-like canine teeth.  Using the extraordinary collection of limb bones of Sabre-tooth kittens at La Brea, we found that their limbs don’t become more robust as they grew up, but instead retain the stereotypical growth pattern where the limbs grow longer more quickly than they grow thick.  To compensate, Sabre-tooth kittens were born with unusually robust limbs and retained that pattern as they grew.”

The limb measurements demonstrated that Smilodon fatalis kittens had the same growth curve graph as those of Tiger or Mountain Lion kittens, but they tended to be thicker from the outset.  For the same length of bone, the Sabre-Tooth kitten forelimb element (radius or humerus) always had a larger circumference than a comparably sized Mountain Lion or Tiger.

A Comparative Analysis of the Tibia of Smilodon (S. fatalis) Different Growth Stages

The scientific paper: “Did saber-tooth kittens grow up musclebound?  A study of postnatal limb bone allometry in felids from the Pleistocene of Rancho La Brea” by Katherine Long, Donald Prothero , Meena Madan, Valerie J. P. Syverson published in PLOS One.