In July 2016, Everything Dinosaur team members reported the discovery of a single tooth from a horned dinosaur in North America.  Given the dental batteries that these herbivorous dinosaurs possessed, that teeth, being extremely hard, stand up well to the fossilisation process and given the number of new North American ceratopsid species named in the last decade, this fossil find might not sound that surprising.  It’s not really about what was found, but where it was found, as the fossil tooth is the first horned dinosaur tooth to come to the attention of the scientific community from the eastern part of the United States.  To a palaeontologist this is a big deal, a very big deal indeed!

Views and Accompanying Computer Generated Images of the Single Tooth

North America in the Late Cretaceous – A Tale of Two Landmasses

A variety of different types of horned dinosaur evolved in the western part of North America during the Late Cretaceous (Campanian faunal stage through to the Maastrichtian faunal stage).  However, during this period in Earth’s history, the landmass we now know as North America looked very different.  The continent was split into two parts, by a large, shallow sea (Western Interior Seaway).  At its fullest extent, this shallow sea stretched from the Gulf of Mexico, through the United States and Canada to the Arctic circle.  Size estimates vary, but it has been suggested (U.S. Geological Survey), that at its maximum, the sea was between 1,900 and 3,000 miles long between 600 to 1,000 miles in diameter.  Bordering the sea in the west was the long, narrow strip of land – Laramidia, whilst to the east, the landmass called Appalachia could be found.  Sea levels rose and fell over this period, eventually the Western Interior Seaway contracted, retreating south as plate movements pushed up the landmasses.  At the time of the dinosaur extinction, this once great area of tropical sea was reduced to a strip of water around the Gulf of Mexico, covering parts of the south-western USA. A map showing the Western Interior Seaway of North America circa 75 mya.

The dinosaur tooth, a single fossil specimen from the right side of the lower jaw (right dentary), was discovered by George Phillips, (curator of Palaeontology at the Mississippi Museum of Natural Science), as he explored a stream bed in Union County (Mississippi), that is known to yield marine fossils that date from the very end of the age of dinosaurs (Maastrichtian faunal stage).  The tooth was found in association with a Mosasaur tooth, ammonite remains, brachiopods and other fossils.  Based on the stratigraphic evidence and the fossil assemblage associated with the tooth, the authors of the scientific paper, published in PeerJ, conclude that this tooth provides evidence that at some time during the very Late Cretaceous horned dinosaurs were able to migrate from Laramidia to Appalachia over a land bridge.

“A land bridge before the end of the Cretaceous could have allowed horned dinosaurs to migrate or disperse through Texas or Arkansas, right before they were all killed in the calamity [a reference to the End Cretaceous impact event].” 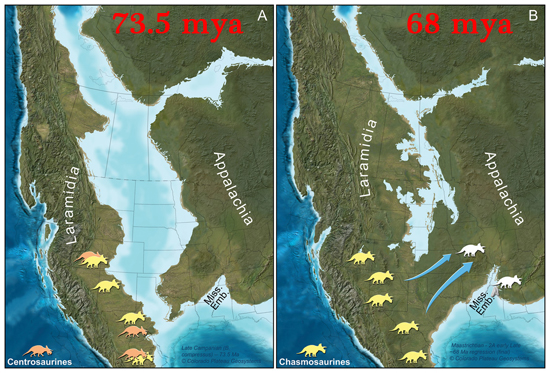 The picture shows two views of North America in the Late Cretaceous (A) around 73.5 million years ago (mya) and (B) around 68 million years ago (mya).  The authors suggest that horned dinosaurs were able to migrate eastwards from Laramidia into the Mississippi Embayment (Miss Emb), area of Appalachia.  Only Chasmosaurine horned dinosaurs are shown migrating into Appalachia (B).  The identity of the horned dinosaur to which the tooth belonged, is unknown, but if the land bridge existed towards the very end of the Cretaceous, then by this date Centrosaurine dinosaurs may well have become extinct in North America.  No fossils of ceratopsids assigned to the Centrosaurinae clade have been found in rocks dating from the Late Maastrichtian. A typical tooth of a Ceratopsian with its two distinct dental roots (Triceratops).

The picture above shows a typical Ceratopsian tooth, from the Chasmosaurine Triceratops.  The fossil tooth from the Owl Creek Formation is the first evidence of dinosaurs to have been found in this formation, (the tooth is the first large, terrestrial animal fossil to have been found in the very well-known and thoroughly explored Owl Creek Formation).  It shows the typical ceratopsid tooth features, including the double root, and a prominent, blade-like carina (serrated edge).  The specimen (MMNS VP-7969), shows little sign of wear so it is unlikely that this fossil had been transported a great distance from where it was found.  It is tantalising to think, that perhaps, a little further upstream more horned dinosaur fossils are awaiting discovery, yet to be exposed by erosion.

Not Reworked and No Floating Carcase from Laramidia

The researchers reject the idea that the tooth has ended up in the stream bed having been eroded out of other rocks and re-deposited in the Owl Creek Formation.  The tooth is too pristine and therefore reworking from notably older Cretaceous-aged rocks is rejected.  In addition, the authors of the paper, Dr Andrew Farke (Raymond M. Alf Museum of Palaeontology, Claremont, California) and George Phillips, discount the idea that the tooth came from a carcase of a horned dinosaur that floated across from Laramidia.  The tooth, they postulate, provides evidence of a land bridge and that at least one kind of dinosaur migrated eastwards to populate the other half of the North American landmass. Great quality model kit to build and paint from Everything Dinosaur.

This fossil discovery provides an intriguing insight into Late Cretaceous palaeoenvironments and the types of dinosaurs that inhabited them, more about this in a follow-up article.