As Everything Dinosaur prepares for the imminent arrival of the next set of 2015 prehistoric animal models from CollectA, team members have the task of writing fact sheets to accompany these new model introductions.  For every named prehistoric animal item that we sell, whether it is a soft toy, a jigsaw puzzle or a dinosaur themed pair of socks we always send out a fact sheet on the animals featured.  The next four fact sheets to be prepared feature the pterosaur Guidraco (a member of the enigmatic Ornithocheiridae from China), the fearsome “War Pig” Daeodon, an ichthyosaur – Temnodontosaurus and last but not least a Moropus.

The Moropus genus is represented by a number of species.  They are members of the chalicothere group of extinct, hoofed mammals distantly related to horses, tapirs and rhinos.  Unlike most of their modern relatives, the chalicotheres were slow moving animals.  Their large hands were twisted inwards at right angles and this meant that they walked on their knuckles, hence the popular name for the chalicotheres – “knuckle walkers”.  However, the large body mass of Moropus suggests that this “knuckle walker” may not have walked on its knuckles like its relatives, this can be seen in the angle and orientation of the left arm in the drawing below.

An Illustration of Moropus Prepared for the Everything Dinosaur Fact Sheet 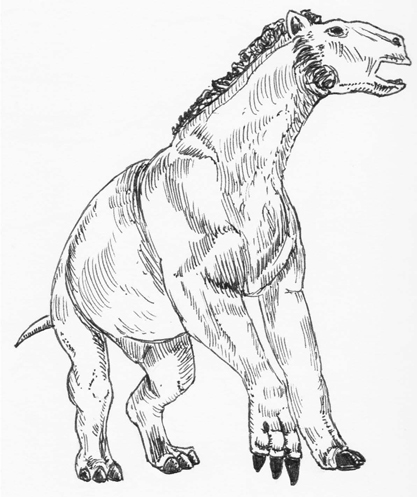 With its sideburns and flowing mane this prehistoric mammal illustration reminds of a number of rock stars from the 1970’s.  We have nicknamed our Moropus prototype model “Noddy” after Noddy Holder, the lead singer of the very successful rock band Slade.

With four fact sheets on the new CollectA models to prepare, it has been pointed out to us that none of these four fact sheets are going to feature dinosaurs.  We are going to be a little bit out our comfort zone. However, we have some very useful reference sources, for example we have some excellent notes within our database on the original work by Othniel Charles Marsh, the American palaeontologist  who named this genus back in 1877.  The genus name means “Sloth or Slow Foot”), whatever the form of locomotion, Moropus was probably a very slow moving animal, one that relied on its sheer bulk and muscle to keep out of harm’s way.

To view the range of CollectA models currently available from Everything Dinosaur: CollectA Prehistoric Animal Models.

These four new fact sheets will be ready by the end of the month so that they can be sent out with the first orders of the newly arrived CollectA replicas.

New for 2015 An Array of Prehistoric Animal Models from CollectA In the picture above, the Moropus replica can be seen on the right and what a magnificent figure it is.  The large claws on the front feet can clearly be seen.  Scientists debate what the claws could have been used for, anatomical studies have revealed that the phalanges (finger bones) were quite flexible so the claws could be raised slightly and held off the ground as it walked.  The claws could have been used to dig up plant roots and tubers as well as acting as a deterrent to any would-be attacker, a “Bear Dog” (Amphicyonidae), for example.  After all, with 1,000 kilogrammes of muscle behind it, Moropus could pack quite a punch!

To view the range of scale models in the CollectA range: CollectA Deluxe Figures.