In the most extensive research into global education practices, Asian countries have come out on top in a poll based on maths and science skills amongst fifteen year-old students.  The OECD (Organisation for Economic Co-operation and Development), set out to test the link between a country’s education system and the gross domestic product (GDP) of that country.  The better educated the workforce the greater propensity for that country’s economy to grow and for wealth to be created.

Students in Seventy-Six Countries were Tested

The UK came out 20th in science and maths tests.

The top five places in the rankings were all taken by Asian countries.  Singapore, a country with an extremely well-respected education system was ranked first, second was Hong Kong, then South Korea, Taiwan and Japan.

The lowest ranked countries in this OECD survey were, unsurprisingly, some of the poorest and least developed countries, although South Africa was rated very low and propping up the table, coming last of all was Ghana.

The survey compiled by Eric Hanushek (Stanford University) and Ludger Woessmann (Munich University), was commissioned by the OECD in preparation for a global education conference due to take place in South Korea next week. The United Nations is going to set a target for raising global education standards by 2030.  The country rankings are based on an amalgamation of international assessments, including the OECD’s Pisa tests, the TIMSS tests run by United States-based academics and TERCE tests from the Latin America countries.  In this survey, both developed and developing countries have been assessed against the same criteria, this allows for accurate comparisons irrespective of a country’s economic status.

Scores of Other Notable Countries

Countries like Spain, France, USA and Russia rank lower than the UK.

One notable absentee from the OECD report is China but with a third of the world’s countries surveyed the study reaffirms the long held belief that Asian countries such as South Korea and Singapore have excellent education systems, especially when it comes to maths and the science disciplines.

“This is the first time we have a truly global scale of the quality of education.  The idea is to give more countries, rich and poor, access to comparing themselves against the world’s education leaders, to discover their relative strengths and weaknesses, and to see what the long-term economic gains from improved quality in schooling could be for them.”

Whilst it may not be possible to mine the data to extract any variations between England, Scotland, Northern Ireland and Wales, which between them do have different national curricula, this study provides a useful benchmark.  The UK results do show that approximately 20% of UK school leavers have only basic maths skills and only a limited knowledge of science.  Academics propose that if basic education levels could be improved in the United Kingdom then this would result in a much more skilled and capable workforce leading to a increase in the GDP and everyone’s economic welfare.

Retracing the Beak of Birds to the Snout of Dinosaurs

A team of scientists based in the United States have tweaked the developmental processes that take place in chicken embryos to re-engineer the snouts of their dinosaur ancestors.  The research team led by University of Yale palaeontologist, Bhart-Anjan S. Bhullar and developmental biologist Arhat Abzhanov (Harvard University), have produced the first bird embryos that possess a snout similar to a dinosaur’s nose rather than a beak.  The chicken embryos developed palatial bones and a jaw configuration that resembles that seen in the fossil record, specifically in the Dromaeosauridae, a group of dinosaurs that are closely related to modern Aves.  The Dromaeosaurs, sometimes referred to as the “raptors” belong to the Sub-order Theropoda.  They are part of a clade of agile dinosaurs that reduced their tails, lost their teeth and evolved into Aves (birds).  Typical dromaeosaurids are Velociraptor, Deinonychus and the recently named Saurornitholestes sullivani.

To read an article about the newly described Saurornitholestes sullivani: Sniffing Out a New Dinosaur Species

Tweaking the Beak from Dromaeosaurs to Modern Birds From the Dinosauria (left) to the beaks of modern Aves (right).

The scientists were not in the business of trying to create a living dinosaur.  Manipulation of chicken embryos has taken place for several years, all part of research to help the understanding of how molecular processes affect the development of organisms.

Commenting on this research, which has just been published in the journal “Evolution”, lead author Dr. Bhart-Anjan S. Bhullar (Department of Organismic and Evolutionary Biology, Yale) stated:

“Our goal here was to understand the molecular underpinnings of an important evolutionary transition, not to create a “dino-chicken” simply for the sake of it.”

For the young doctor, this is all part of his on-going research into cranial development in very young animals.  It is not part of a concerted effort to bring back the Dinosauria, a sort of “Jurassic Park from the embryo upwards”, as explained by a spokesperson from Everything Dinosaur.

There are a huge variety of bird beaks, from the curved, tearing and cutting beaks of eagles, to the sophisticated sieves of flamingos.  The beak is an essential component of avian anatomy and the researchers are trying to unravel how the beak evolved from its reptilian ancestry.  A quantitative analysis of fossils closely associated with the origins of birds was undertaken along with a study of extant animals including lizards, crocodiles and birds.  This examination allowed the scientists to develop a hypothesis as to how the bird beak may have evolved from the Dinosauria and the developmental stages that were involved.

The team identified that both major living lineages of birds, the abundant Neognathae (which includes virtually all species of extant birds) and the much rarer  Palaeognathae (which comprises the Tinamou family of birds from South and Central America plus the flightless ratites – cassowary, ostrich, kiwi, rhea, for example), differ from reptiles that are not closely related to birds and from mammals in that they have a unique, median gene expression zone of two different facial development genes early in embryonic development.  This median gene expression had previously only been identified in chicken embryos.

Turning Back the Evolutionary Clock

In order to have an embryo revert to its ancestral state, before the beak as it were, the gene expression for beak formation in the young chicken had to be turned off.  Microscopic beads coated in a molecule inhibiting substance were used to inhibit the activity of the proteins produced by the bird specific, median signalling zone in the chicken embryos.  This led the embryo to revert back to its reptilian ancestry with a more dinosaur-like snout forming and surprisingly, the palatine bone in the root of the mouth was also altered.

Changing the Faces of Embryos (Modified Chicken Embryo with Snout) 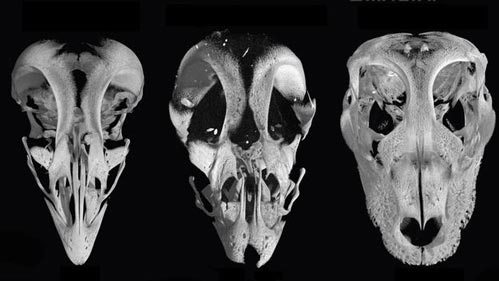 Dr. Bhullar was surprised by the additional changes seen in the palatine bone, he stated:

“This was unexpected and demonstrates the way in which a single, simple developmental mechanism can have wide-ranging and unexpected effects.”

Commenting on the research, Professor Michael Benton (Bristol University), someone who knows a great deal about bird evolution, explained that this new study shows that the beak of birds develops very different from the snouts, noses and jaws of reptiles.  A different set of genes are involved.

“That’s what proves the beak is a real adaptation or “thing”, not just a slightly different nose shape”

Intriguingly, although the fossil record for bird evolution is far from complete, the fantastically well preserved bird fossils of Lower Cretaceous deposits from China, specimens of Confuciusornis for instance, show that by around 125 million years ago the toothless beak had evolved.  Why the beak came about remains a point of significant debate, however, one of the most often cited reasons for a lighter, toothless structure is that as birds became more efficient fliers and spent more time in the air, the loss of a heavy, bony jaw lined with teeth was just one of a number of anatomical adaptations that occurred to help improve powered flight. Confuciusornis sanctus a primitive bird but it had a beak.

The American based researchers are confident that their work has important implications for other geneticists and for palaeontologists.  For example, if a single molecular mechanism was responsible for this transformation, there should be a corresponding, linked transformation in the fossil record.  The flightless, man-sized Hesperornis, a genus of prehistoric bird known from the Late Cretaceous of North America could demonstrate that link.

An Illustration of Hesperornis (Traditional View)

“This is borne out by the fact that Hesperornis, discovered by Othniel Charles Marsh of the Yale Peabody Museum of Natural History, which is a near relative of modern birds that still retains teeth and the most primitive stem avian with a modern-looking beak in the form of a fused, elongate premaxillae, also possesses a modern bird palatine bone.”

The premaxillae are the bones that form the tip of the upper jaw (anterior portion) of most animals, but are enlarged and fused to form the beak of birds.

Moving forward, the quantitative analysis to establish a proposed hypothetical developmental path of a lineage of animals which could be tested by inhibiting the behaviour of proteins in embryos can be probably be used to investigate a wide range of underlying developmental mechanisms in organisms.

The dinosaur/bird link is now well established, a theory once proposed by the likes of Henry Govier Seeley back in the 1880’s is widely accepted.  Back in 2013, Everything Dinosaur reported on research from an international team of scientists, including researchers from the Royal Veterinary College (London), that looked at how the posture of birds was derived from the gait of small, cursorial dinosaurs.

To read more about this study: The Birds Have the Dinosaurs to Thank for their Crouching Gait

Everything Dinosaur notes the support of Yale University in the compilation of this article.