Getting our Teeth into Malaysia’s Dinosaurs

Back in February of this year, February 18th to be exact, Everything Dinosaur wrote an article about the discovery of Malaysia’s first dinosaur fossil, a small tooth believed to represent a member of the Spinosauridae.  Although, this fossil was just a little over two centimetres in length, it made a big impression on Asian palaeontologists.  Here was evidence that Malyasia, like Thailand and Laos, could be home to dinosaur fossil remains, most probably new species to boot.

Now, exactly nine months later, we are happy to report on the unearthing of more fossils from Malaysia, they hint at a potential treasure trove of new dinosaur discoveries that could be made, perhaps rivalling the recent dinosaur discoveries of Western Malaysia’s northern neighbour Thailand.

To read about the discovery of Malaysia’s first dinosaur fossil: Malaysia’s First Dinosaur – A Fossil Tooth is Found.

Firstly, the team behind the discovery of and research into the Spinosauridae tooth have reported that they have found evidence of a second type of dinosaur in the same region.  It’s another fossilised tooth, but not from a meat-eating theropod, this tooth is that of a herbivore and similar to the teeth of bird-hipped dinosaurs (ornithischians), although the family is difficult to determine as the teeth looks to be heavily worn and from the photographs that have been released, it is not easy to determine any clear, distinguishing traits.  According to some press reports we have read, the tooth may have come from an armoured dinosaur, a member of the Thyreohora (shield-bearers), a sub-group of the ornithischian dinosaurs that consists of the armoured dinosaurs. A second fossil tooth has been discovered.

In the picture, of the lead researchers in the Malaysian dinosaur project, Dr Masatoshi Sone from the University of Malaya (Kuala Lumpur), holds up a coin to show the size of the fossil specimen.  This tooth is smaller than the theropod’s discovered earlier, it is just 13 mm long and measures 10.5 mm wide.  The age of this fossil has yet to be determined but the research team, which also includes scientists from Japan’s Waseda University and Kumamoto University, hope to use pollen micro-fossils, recovered from the surrounding matrix to help date the specimen more accurately.  For the time being, the fossil tooth is being described as from the Early Cretaceous so it could be around 140 million years old.

This second fossilised tooth was found in the same locality as the first tooth fossil, the Taman Negara region of Pahang State (Western Malaysia), the exact location of the fossil find is being kept secret, to deter amateur fossil hunters from damaging the site.  The Taman Negara region is extensively forested and searching for fossils in a part of the world that is heavily vegetated is not easy, but the research team were keen to point out that construction projects often allowed access to bedrock and rock strata not normally within reach.  Dr Masatoshi remarked that he often took his wife with him to explore the ground works of housing construction projects, as these building sites, with the vegetation cleared and excavations, were ideal places to look for evidence of ancient life in the freshly exposed rocks.

When asked about the possibility of further dinosaur finds, Dr Masatoshi stated:

“It is plausible that large dinosaur fossil deposits still remain in Malaysia.”

How true!  No sooner has the University of Malaya held a press conference to show their new dinosaur discovery, then there comes a report from the Mineral and Geoscience Department of the Malaysian Geological Heritage Group that more evidence of dinosaurs has been found, this time in the Mount Gagau region of Terengganu State, some distance from the Pahang fossil finds.  These new fossils are believed to be unrelated to the finds made by the research team led by Dr Masatoshi and they have yet to be accurately dated.  The discoveries consist of several footprints, bones and teeth and at least three different types of dinosaur are represented, although it is impossible to identify them down to the genus level at the moment.

Commenting on the dinosaur fossil finds, one of the directors of the Mineral and Geoscience Department of the Malaysian Geological Heritage Group, Datuk Yunus Abdul Razak stated:

“They are significant findings that will lead to even more dinosaur fossil enquiries, also, the fossils that we found were more intact.”

A tooth, measuring about 1.5 cm in length and two footprints could be from an iguanodontid, a member of a group of highly successful ornithischian dinosaurs whose fossils have been found in Cretaceous aged deposits all over the world.  There have even been reports of iguanodontid fossils recovered from Upper Jurassic strata, for example camptosaurs and other North American ornithopods. 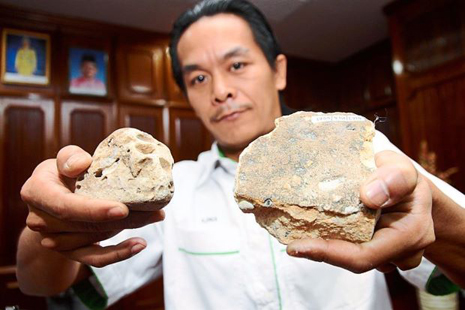 Fossils of iguanodontids are known from South-East Asia, with a number of fossil specimens identified as belonging to members of the Iguanodontidae family, but once again, genus identification is difficult.  With luck, as more fossils are found, the scientists will be able to build up a picture of the Dinosauria of South-East Asia and assign some fossils to new genera.

At Everything Dinosaur, we look forward to hearing more about dinosaur discoveries from Malaysia.