Scientists have announced the discovery of a new species of flying reptile (pterosaur) that very probably lived in colonies and had a bizarre head crest shaped like the wing of a butterfly.  The fossils were found in south-eastern Brazil, near to Cruzeiro do Oeste in Paraná State, about 300 miles west of the city of São Paulo.  The actual fossil site discovery was made in 1971, but a formal study of the extensive fossil material has only just been completed. The scientists who carried out the research were drawn together from various Brazilian museums and research institutes as this discovery represents the first time an extensive bone-bed of pterosaur fossils has ever been found.  The fossilised remains of at least forty-seven flying reptiles have been described to date, although the strata may have preserved the remains of hundreds of individual animals.

This new species has been named Caiuajara dobruskii (pronounced Kay-you-ah-jar-rah doe-brusk-key)  and the fossils represent  mainly young animals although the remains of at least two fully grown adults have been identified.  The smallest pterosaurs preserved had wingspans of around sixty-five centimetres, whilst the adults had wingspans in excess of 2.3 metres, making a fully grown Caiuajara about the size of Golden Eagle (Aquila chrysaetos).

An Artist’s Impression of the New Species of Flying Reptile The fossilised bones of at least 47 individuals have been found.

So far, about 130 different genera of pterosaur have been identified worldwide.  However, most of these are known from just a few fragmentary bones.  In this instance, the palaeontologists have hundreds of bones to study and they can map the growth and development of these creatures.  It seems that the bizarre “butterfly-wing shaped crest”, got bigger and more elaborate as this reptile grew and matured.  The Brazilian researchers were able to plot how the crest changed as these animals got older.  Palaeontologists think that a number of types of flying reptile sported elaborate crests.  It seems that the males of many species used their crests to display and attract a mate, as the one definite fossil of a female pterosaur known did not have a substantial crest.

Crest Shape and Size Changed as these Pterosaurs Grew Reconstructing the shape of adult and juvenile Caiuajara skulls.

The picture on the left shows various bone fragments representing different stages of growth, from very young animals (top left) through to mature adults (bottom right).  The crest images indicate the suggested changes in the skulls of these pterosaurs as these animals grew and matured  from a juvenile skull (light colour) to an adult (dark colour).

The fossils were found at three levels of sandstone that form part of the Caiuá Group of the Goio-Erê Formation.  A fourth layer, representing a younger geological deposit was also excavated but this only yielded a few very fragmentary remains.  The strata represents deposition in a palaeodesert environment associated with a water source, very probably a lake.  The research team have suggested that Caiuajara dobruskii lived in large colonies around an oasis which was surrounded by desert.  Since no egg shell material has been recovered it seems unlikely that this was a nesting site.  However, study of the very youngest specimens suggest that these animals were precocial (able to fend for themselves almost immediately after hatching), and that they could fly at a very young age,  although an extensive period of parental care is not ruled out by the researchers.

As the fossils were found in defined layers, the scientists have concluded that this region was home to pterosaur populations for an extended period of time, thousands of years.  Dramatic events such as violent storms could have hit the colony from time to time carrying any bones into the lake where they would eventually be preserved.  An alternative hypothesis, not favoured by the researchers, who have published their data in the latest edition of the on line scientific journal “PLOS One”, is that this region represented a staging post and Caiuajara was migratory.

Demonstrating the Density of the Fossil Material that Accumulated 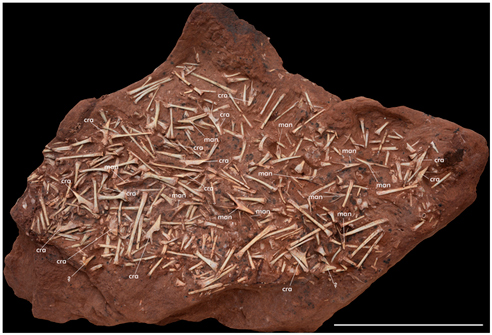 The picture above shows one of the blocks of sandstone containing a large number of disarticulated pterosaur fossil bones, at least fourteen partial skulls have been identified in this individual stone block.  Scale bar = 20 centimetres, mandible (jaw bones) = man and cranium (skull bones) = cra.

This is an important fossil discovery because:

If pterosaurs like C. dobruskii were indeed gregarious and highly social animals then this might help explain the evolution of those bizarre crests.  Bigger and more elaborate crests being selected for as females over generations showed a preference for larger crests in potential mates.

This new species has been assigned to the Tapejarinae sub-family of Tapejaridae pterosaurs.  The genus name is a combination of Caiuá after the formation in which the fossils were found and the pterosaur family name (although coincidently, there is a small town called Tapejara close to where the fossils were discovered as well).  The trivial name honours Alexandre Dobruski, who with his son, João Dobruski, found the fossil site back in 1971.

An Illustration of a Typical Pterosaur from the Tapejaridae Family The Goio-Erê Formation has proved extremely difficult to date.  It is estimated that the sandstones that make up this formation were laid down sometime in the Upper Cretaceous from around 93 million years ago to 75 million years ago.  Other Tapejaridae fossils found in north-eastern Brazil, Europe and China date from the Lower Cretaceous, making Caiaujara dobruskii potentially the youngest known member of the Tapejaridae family in terms of geological deposition.

“Although the head crest makes this flying reptile look quite fierce it actually had no teeth in its jaws.  It is not known what this pterosaur may have eaten but like other members of the Tapejara family it possessed a relatively short but robust beak.  It could have specialised in eating fruits and seeds from the flourishing flowering plants (angiosperms).  Imagine that!  Pterosaurs playing a role in seed dispersal for flowering plants.”