A Review of the Summer 2013 Edition of Prehistoric Times Magazine

The first prolonged period of hot, summer weather in the UK for quite a while has been made all the more enjoyable with the arrival of the latest edition of Prehistoric Times, the magazine for dinosaur model fans and prehistoric animal enthusiasts.  It is ideal reading material for sitting outside the office and soaking up some sunshine, if only the other Everything Dinosaur team members would let go of the magazine for long enough.

This issue (number 106), marks the first copy to be produced after the twentieth anniversary issue and it sets the standard for the next two decades with some excellent articles and features.  The two prehistoric animals given most prominence are Tyrannosaurus rex and the “T. rex” of its day the fearsome Triassic predator Postosuchus.  We expect that Mike Fredericks, the editor would have been swamped with artwork and indeed, lots of reader’s illustrations are featured, especially of T. rex.  There are some wonderful depictions, even feathered versions of T. rex.

Tracy Lee Ford’s excellent series, “How to Draw Dinosaurs” focuses on this apex predator.  He compares the arm bones of Tyrannosaurus rex with those of other Tyrannosaurids and sets about building up a picture of a powerful predator with exceptionally strong hind legs, a deeper body and a more massive tail.  He concludes that such a dinosaur was not a particularly fast runner, but still an immensely capable and powerful opportunistic hunter.

Amongst all the collector news and model releases, there is a special tribute to Ray Harryhausen, whose stop motion special effects amazed us all in such fantastic films as  “Jason and the Argonauts”, “The Valley of the Gwangi” and “Clash of the Titans”.  Ray sadly passed away on May 7th, William Stout has produced a super article with artwork in tribute to Ray and there is a model diorama of the monster from the 1953 film “The Beast from 20,000 Fathoms”, it looks like lighthouses were not monster proof!

The front cover artwork (featuring T. rex), was created by up and coming Ukrainian artist Sergey Krasovskiy.  Sergey has chosen to depict this fearsome Late Cretaceous carnivore with a conspicuous red head ala theories from Bob Bakker et al.  Sergey also contributes to the feature on Postosuchus with some great drawings of Prestosuchus chiniquensis, Ornithosuchus longidens and Postosuchus kirkpatricki. 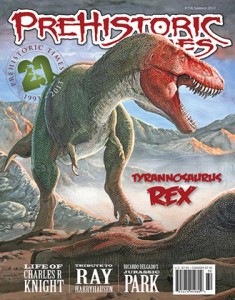 Marking the 20th anniversary of the magazine.

There are also articles on the life-sized prehistoric animal models sculpted by Josef Pallenberg, updates on dinosaur discoveries and a special interview with artist Ricardo Delgado, part of a series the commemorates twenty years since the first Jurassic Park movie.  Team members at Everything Dinosaur even spotted some prehistoric animal drawings that we know very well in this edition and it was particularly interesting to see how clever Steven B. DeMarco “made over” three dinosaur model kits which were manufactured by Pyro many moons ago.

Once again, a great magazine and a great read.