Home/Dinosaur and Prehistoric Animal News Stories, Palaeontological articles/How the Tortoise Got Its Shell

How the Tortoise Got Its Shell

New Research Sheds Light on the Evolution of the Chelonians

The chelonians, the group of reptiles that includes tortoises, turtles and terrapins are very ancient, with origins dating back to the Permian geological period.  However, the fossil record for early types of these shelled reptiles is extremely poor and scientists had very few transitional fossils to study to provide data on how and when these reptiles evolved their unique shells on the outside of their bodies.  Chelonians possess a shell, it is made up of highly modified ribs, vertebrae and shoulder girdle bones.   These reptiles have a unique skeletal structure amongst vertebrates, their shoulder and hip girdles are inside their rib cage.  Some tortoises for example, can pull their heads and limbs and tail inside their protective shell, some species even have hinges within their shells allowing them to close the aperture for the head completely.

Critics of the theory of evolution had cited the complex carapace and plastron of turtles as being evidence to counter the evolution hypothesis, where over thousands of generations incremental changes lead to the development of new features and characteristics and hence new species.  How could such a complicated structure come about?  A team of researchers from the Smithsonian Institute (United States), have been studying a fossil of an animal from the Late Permian of South Africa that provides new information into the evolution of the Chelonia.

Fossils of turtles and tortoises from the Late Triassic, animals such as Proganochelys from Germany already had fully formed shells, what the scientists needed were earlier fossils of ancestral Chelonia that would provide information on the transition from a non-protected body to the evolution of an enclosing carapace and plastron locked together.  Five years ago, the first of the clues was unearthed in China.  The fossilised remains of an early turtle, one that lived ten million years before Proganochelys was discovered.  This creature named Odontochelys semitestacea, lacked the characteristic beak of extant turtles, instead it had teeth in its jaws and although it had a fully developed plastron (belly plate), the carapace was only partial, made up of extended and widened ribs and vertebrae but not fused together.  O. semitestacea was a transitional fossil, but what the research team really needed was a much older specimen, not Triassic material but fossils dating from the Permian to show the initial evolutionary line of the turtles and tortoises.

An Illustration of the  Late Triassic Tortoise Proganochelys With newly discovered fossils of a modified parareptile known as Eunotosaurus africanus, from Late Permian aged deposits in South Africa, the Smithsonian team had an opportunity to study the origins of the turtle evolutionary line.  The team’s detailed study showed that this species also had distinctively broadened ribs and it  shared many anatomical features only found in the Chelonia, such as no inter-costal muscles that run in between the ribs, paired belly ribs and a specialised mode of rib development.  This suggests that E. africanus is basal to the Chelonia and represents an early step on the evolutionary path to the turtles, tortoises and terrapins that we know today. The tortoise shell – fossil evidence suggests the shape of things to come.

Peter Buck Postdoctoral Fellow at the Smithsonian’s department of Vertebrate Zoology, Tyler Lyson one of the authors of the study commented:

“Eunotosaurus neatly fills an approximately 30–55-million-year gap in the turtle fossil record.  There are several anatomical and developmental features that indicate Eunotosaurus is an early representative of the turtle lineage; however, its morphology is intermediate between the specialised shell found in modern turtles and primitive features found in other vertebrates.  As such, Eunotosaurus helps bridge the morphological gap between turtles and other reptiles.”

The ribs in most other animals protect internal organs and help ventilate the lungs to assist breathing.  Because the ribs of turtles have been modified to form the shell, they have also had to modify the way they breathe with specialised muscles.  This presents the scientists with their next challenge.  They plan to examine the novel respiratory system in turtles and see how it evolved in conjunction with the evolution of the turtle’s shell.  Studies of the embryos of turtles in the laboratory can assist them in this work, it seems that with the discovery of the South African fossil material, researchers are finally able to explain how tortoises and turtles got their unique shells.

In the short video sequence produced as an accompaniment to this scientific research, the evolution of the shell of Chelonians is demonstrated.  The computer generated images take the viewer through a series of evolutionary steps from Eunotosaurus africanus to a number of extinct forms, each with a more complete carapace and plastron.  This video shows how the ribs, shoulder girdle and back bones were slowly modified over time to help form the protective outer shell of the Chelonia. 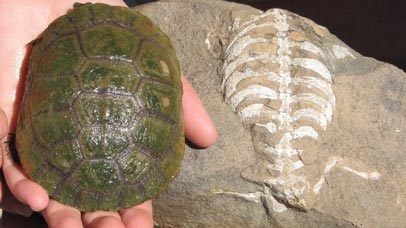 The picture above shows an extant South African sideneck turtle next to its 260-million-year-old relative, Eunotosaurus africanus.