Home/Animal News Stories, Everything Dinosaur News and Updates, Main Page, Press Releases/Which was the Largest Crocodile of All Time?

Which was the Largest Crocodile of All Time?

Sarcosuchus, Purussaurus, Deinosuchus or Any Other Candidate?

Crocodiles are certainly an ancient group of reptiles, with their origins predating the dinosaurs.  However, which of these animals would be classified as the largest – this might be difficult to say.

A few days ago, we reported that Cassius, an eighteen foot long “Salty” had been declared the largest crocodile in captivity by the Guinness Book of Records.

However, a number of extinct types of crocodile are known to be much larger.  Indeed, having checked with the Guinness Book of Records, the largest prehistoric crocodile (according to them), is Sarcosuchus (Sarcosuchus imperator), a member of the Eusuchia, fossils of this crocodile are known from Cretaceous strata from Niger (Africa).  Although, there is a lack of fossil material, estimates of length provide a consensus that this reptile may have been ten to twelve metres long.  It has been suggested that this fearsome predator may have weighed eight tonnes.  This would make Sarcosuchus (flesh crocodile) a contender for the largest type of crocodile known.

A Model of the Prehistoric Crocodile Sarcosuchus Then there is the much more recent, South American, giant Purussaurus (Purussaurus brasiliensis).  This prehistoric caiman is known from a number of fossil locations in South America (Brazil, Peru and Venezuela).  An expedition to the Peruvian Amazon back in 2005 discovered more fossils and from one particular skull, which measures over fifty-five inches in length, it has been estimated that this caiman from the Miocene may have reached lengths of between ten and thirteen metres.  We think this member of the crocodile family is also known as Mourasuchus amazoniensis, but this is regarded as a junior synonym.

There is also Deinosuchus (Terrible Crocodile) to consider.  Deinosuchus (D. hatcheri) lived during the Late Cretaceous.  Its fossils have been found in the United States.  Once again size estimates are difficult to affirm.  When looking at extant species today, the head length can be assessed as being approximately one eighth the size of the entire animal measured from the tip of its snout to its tail.  This is a useful guide when trying to work out the size of a crocodile or alligator when it it swimming and only a portion of the head is above the water.  Using measurements taken from a huge, nearly complete skull, found in the Big Bend River formation, Texas, and described by the scientists Colbert and Bird back in the 1950s, Deinosuchus was estimated to be over fifteen metres long and to weigh in excess of eight Tonnes.  Since then further analysis of fossil fragments, bones and dermal armour (scutes) has been undertaken and palaeontologists now estimate Deinosuchus to be a little smaller, but it is still a contender for the largest croc of all time.  The jaws are more robust than those of Sarcosuchus, suggesting that Deinosuchus predated upon large animals, perhaps attacking dinosaurs as they came close to water to get a drink.

Which was the Largest Crocodile? 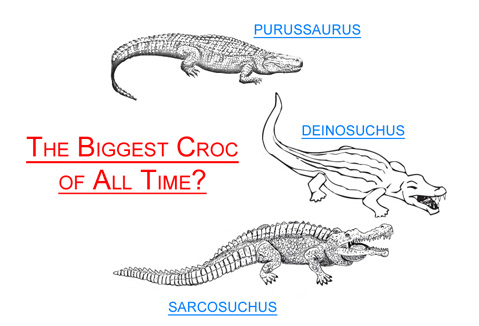 One for the Guinness Book of Records to contemplate.

Team members at Everything Dinosaur have had a go at producing art materials and drawings to illustrate the likely candidates for the title of largest crocodile known to science.

Recently, a group of scientists published a paper detailing their study of suspected Deinosuchus coprolites (fossilised dung), thus providing a potential insight into this reptile’s diet:

To read more about Deinosuchus and a follow up article: Ancient Crocodile Poop Provides Information on the Diet of Deinosuchus.

Update on Deinosuchus: Update on the Diet of Cretaceous Crocodiles.

The crocodiles are indeed an ancient group of reptiles, they evolved into a myriad of forms, some of these were gigantic but as to which genus was the biggest – it looks like we will be debating this for some time.

For models and replicas of prehistoric animals including many models of extinct animals from the crocodilian line of the Archosauria: Ancient Crocodiles and Prehistoric Animal Models.