A Bias in the Fossil Record

The geological record of life on Earth, that is the fossil record, is not a fair sample of the life that existed in the past.  This is because fossilisation favours certain organisms in certain environments over others.  Fossilisation is more likely to occur if organisms have hard parts to preserve such as shells, teeth, bones and such like.  The habitat and the habits of any organism can also have a dramatic effect on the chances of becoming fossilised. Is there a bias in the fossil record?

Bias in the Fossil Record

Take for instance the following example:

Two species of bivalves (molluscs) are broadly similar and their shells are composed of the same material, one lives by being attached to rocks (mussel), the other lives by burrowing into soft sediment (cockle).  When the mussel dies, it is likely to be displaced from its rocky home and the shell would be most likely broken up against the rocks by wave and tidal action.  The cockle, in contrast when dead would remain buried in the sediment and if not attacked by scavengers it would soon become buried deeper and deeper.  The cockle by nature of its habit and the environment where it lived has a higher preservation potential than the mussel. 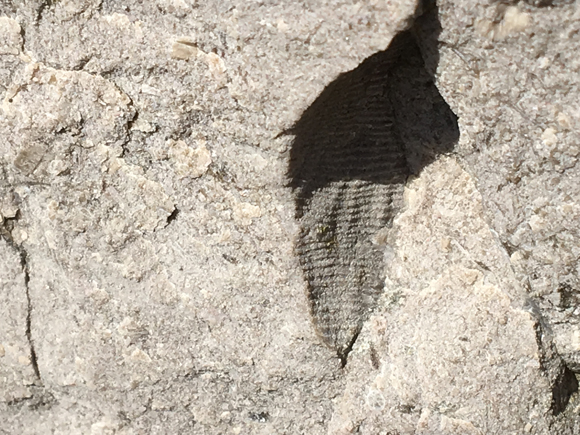 A glimpse into a lost world, an impression of the shell of a brachiopod preserved in the limestone. Picture credit: Everything Dinosaur.

The fossil record shows a bias towards invertebrates with hard shells, that lived in shallow-water, continental-shelf areas and inland lake basins.  Despite the huge size of the oceans compared to the land and the continental shelves and despite the lack of scavengers at the bottom of the deepest parts of the oceans compared to the sunlit areas, very few ocean-floor rocks or fossils are preserved.  Rocks on the ocean floor are prone to subduction back into the mantle as a result of plate tectonics.  In general, the fossil record tends to under represent the ancient life of ocean floors, upland areas on land, forested areas away from water and any organism without hard body parts.

For fossils of iconic invertebrates from the fossil record: Models of Fossil Animals.

Everything Dinosaur team members have put together a teaching guide on preservation potential.  This looks at four specific preservation factors – species abundance, geographical spread, marine versus non-marine and hard body parts versus soft body parts.  This is part of our work on how fossils are formed, explaining the difference between body and trace fossils.