“Land of Dinosaurs” – List of Models in this Series

“Land of Dinosaurs” – List of the Twelve Models in the Series

We have been asked to provide a list of all the prehistoric creatures featured in this series, so listed below are the details.

“Land of Dinosaurs” – Description of Models 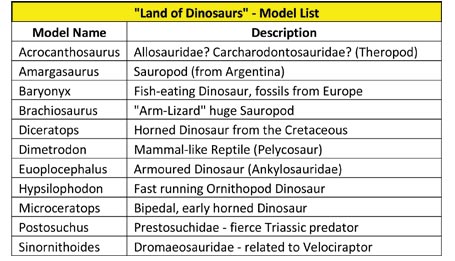 To view the huge range of dinosaur, pterosaur and prehistoric animal models in stock at Everything Dinosaur: Dinosaur and Prehistoric Animal Models. A rare item – model of hypsilophodont.

The picture shows the bright and colourful Hypsilophodon model, this fast-running dinosaur is eating some ferns, next to it is a model of a juvenile Postosuchus.  These models are well made, sturdy and represent an array of unusual and very different prehistoric animals.

They are great for creative, imaginative play.