Writing Yourself into the History Books using Prehistoric Ink

Although the solid piece of a belemnite’s skeleton (the guard) is a common find on the beaches of Charmouth and Lyme Regis (Dorset, England), finding the preserved soft body tissues of any cephalopod is an extremely rare event.  However, such is the state of preservation at one fossil site in Wiltshire, that not only have soft tissues been preserved but scientists have been able to reconstitute the ink from the squid-like creature’s ink sac and then write and draw with it.

The fossil in question is a belemnite, the scientists who made the discovery commented that the chances of finding such an exquisitely well preserved belemnite specimen, one that had soft parts including an ink sac still preserved as “a billion to one chance”.

Many scientists talk about a discovery re-writing the fossil record, but in this instance the researchers were able to liquefy the ink contained in the preserved remains of a 155-million-year-old creature and draw the animal as it would have looked in life and even sign its Latin name Belemnotheutis antiquus under this unusual self portrait.

The word “belemnite” comes from the ancient Greek for a dart.  The internal skeleton or guard (made from tough, resistant calcite),  is a very common find, particularly at the famous “belemnite beds” on the Charmouth side of the Lyme Regis bay area.

An Illustration of a Belemnite

The specimen that yielded the ink for the self portrait came from a site near Christian Malford in Wiltshire.  This location had been originally discovered by engineers building the Great Western Railway in the 19th Century but the directions to it were lost and a team of researchers from the British Geological Survey set out to see if they could re-locate it.  This is a case of real fossil detective work.  They had some original notes to go on, plus the fact that the fossil site had to be found somewhere along the Wiltshire stretch of the old Great Western Railway.  Fortunately, the team were able to rediscover this special site, and some of their subsequent excavations were filmed as part of the BBC/Open University series “The Fossil Detectives”.  The site when it was discovered in the early 1840s, was quickly recognised as being of very great importance.  A number of leading scientists in the embryonic study of palaeontology wrote papers on the specimens found at the site, including Sir Richard Owen and Gideon Mantell. 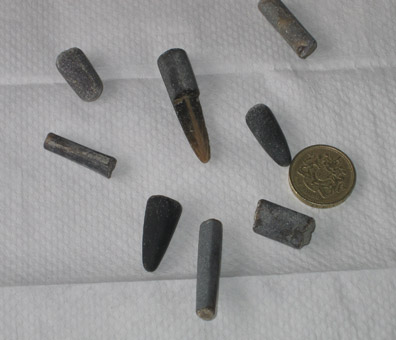 The pound coin provides a scale for these various pieces of fossil belemnite guard found in just a few minutes whilst searching the high water mark at Charmouth beach.

Belemnites resembled squids and they probably fulfilled the same role in the marine food chain as many squid species do today. They had ten arms of equal length and each arm had as series of between 30-50 curved hooks that helped them to grasp prey and manipulate it towards their beak-shaped mouths. Many fossils of the marine reptiles known as ichthyosaurs have belemnite hooks preserved in the area where the stomach would have been. This indicates that many of these marine predators preyed on belemnites and that they were an important food source.  Scientists have estimated that although the origins of the belemnite family can be traced back to the Palaeozoic it was during the Mesozoic that this group rapidly diversified and expanded.  An estimated 2,000 species of belemnite are known in the fossil record.  Despite being hugely successful in marine environments, no trace of belemnite fossils have ever been found in strata derived from a freshwater environment.  It seems that belemnites were entirely marine and nektonic (swimming actively).

Fossils of cephalopods with soft tissue elements preserved are extremely rare.  Pictures show a superbly preserved specimen of a Belemnotheutis spp.  The animal is facing towards the right and some of the hooks associated with the tentacles can be seen in the top right corner of the picture.  Belemnites probably swam backwards by projecting a jet of water through a syphon-like structure that was positioned under the front of their bodies.

We think the pictures shown, represents a Belemnotheutis spp. from the famous Solnhofen limestone deposits in Germany.

The British Geological Survey team removed a total of 240 tonnes of rock in the ten days or so they had to explore the site.  A number of extremely well preserved invertebrate fossils were found, including one of the squid-like animal that was able to yield ink from its fossilised remains.  The dark, stained area of the fossil was carefully treated with an ammonia solution which permitted the ink to be liquefied and used for the illustration.

The amazing preservation was the result of what palaeontologists call the “Medusa effect”.  Fossilisation occurs very quickly, permineralisation is rapid and soft body parts are fossilised as well.  The soft tissue becomes mineralised with phosphatic elements and even eyes and delicate tentacles are captured by this very rare process.

Commenting on the re-discovery of the Victorian fossil site, Dr Phil Wilby of the British Geological Survey stated:

“It’s among the world’s best fossil preservation.  It’s a squid-like creature, but it’s not like anything we have in the world today.   You really don’t imagine anything so soft could be so well preserved three dimensionally.  It still looks as if it is modern squid ink.  It’s absolutely incredible to find something like this.  We felt that drawing the animal with it would be the ultimate self-portrait”.

Dr Wilby can be seen in photographs proudly showing off the drawing of the ancient marine animal.  When asked whether other drawings would be made using the prehistoric ink, Dr Wilby stated that this material was so valuable that it would be very unlikely that more drawings would be made.  Part of the remaining ink sac and ink has already been despatched to Yale University in Connecticut (United States) for further, more detailed analysis.

The British Geological Survey team remain unsure as to why conditions arose at the bottom of the sea at this precise location 155 million years ago that permitted such exquisite preservation of organic remains.

“About 155 million years ago, millions of these animals were dying in this precise area.  We don’t know why that is.  In normal circumstances, the decomposition process means only the hard parts of animal are preserved, such as the bones, shell and teeth.  The odds of this find are easily a billion to one and probably much greater”.

Such fossils can tell scientists much more about these strange, squid-like creatures than the rostrum or phragmocone remains.  The fossilised soft tissue once studied will enable scientists to discover whether this particular belemnite was a fast or slow swimmer by analysing the structure of the preserved muscle fibre impressions.

More than twenty of these very special fossils have been removed from the site and added to the British Geological Survey collection at Nottingham.  It is hoped that over the next few months more data on these extinct creatures will be obtained as the fossils are prepared and studied under laboratory conditions.

One thing is for sure, a belemnite has literally managed to write its name in the fossil record.