Did lack of Vitamin D lead to Tuberculosis in early Man as he Migrated North?

In science, a breakthrough in one field leads to a better understanding in a whole host of other scientific studies, often ones that on first inspection would have Little to do with the field of science where the break through occurred.

Take our understanding of tuberculosis for example.  Tuberculosis is an infectious disease of the lungs, it is caused by the bacillus Mycobacterium tuberculosis and unless effective treatment is available, this disease can be fatal.  In 2007, a series of papers were published in various scientific and medical journals detailing the outcome of an extensive research project that proved a link between humans ability to produce vitamin D and their ability to fight off tuberculosis.  It seems that vitamin D produced in the skin as it reacts with sunlight can strengthen our immune system and trigger a chain of events that help people fight and kill the infectious bacillus within their bodies.

Now palaeontologists have applied this modern theory to help them examine the skull of an ancient human found recently in western Turkey, a skull which is estimated to be 500,000 years old.  The fossil remains have been identified as belonging to Homo erectus an early hominid that was extremely successful migrating out of Africa establishing humans in parts of the world for the first time.  H. erectus moved north up the Nile valley, through Sinai and onto the region of the Black Sea.  For this poor individual, a male aged between 15 to perhaps 40 years of age, whose skull was found in a block of rock, this was as far as he got.  However, H. erectus continued to spread and colonise new areas of the world including the Himalayas, the jungles of south-east Asia and eventually China.  Hence the alternative name for this particular species of human “Peking Man”.  Indeed, it could be claimed that Homo erectus was one of the most successful species of hominid ever.  They were around for over 1 million years and they spread to virtually every known part of the Old World.

A Model of Homo erectus 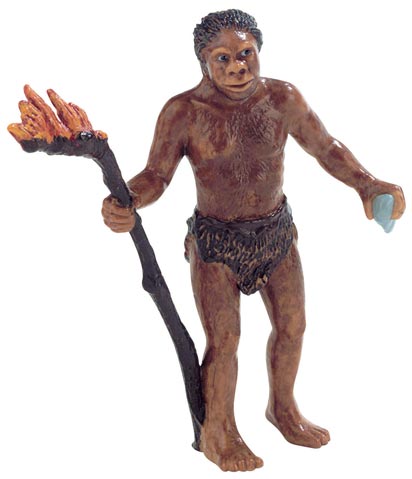 The skull will help scientists understand more about the migration of H. erectus but intriguingly anthropologists from the university of Texas have identified strange pits and lesions on the inside of the cranial material which may indicate that this poor fellow suffered from and probably died from tuberculosis.

The blue arrow indicates the lesions identified on this piece of skull material.  The lesions are caused by a specific kind of tuberculosis bacillus that infects the membrane surrounding the brain.  Inflamed nodules within the membranes create pressure on the bone surface leaving marks and lesions.

If tuberculosis lesions are present in the skull then it may reinforce the theory regarding the association between vitamin D and the ability to fight off tuberculosis infection.

Vitamin D is synthesised in the skin by exposure to sunlight. Since ultraviolet radiation penetrates only the top layers of skin, people with darker complexions produce less of the vitamin, as the pigment in their skin filters out the sunlight.

Earlier studies have suggested that humans migrating north developed a lighter skin complexion as an adaptive response to maintain their vitamin D levels when exposed to less sunlight.  So it may have been an inability to synthesis vitamin D due to having a dark skin colour that caused the demise of many early hominids as they journeyed north.

Published medical literature about modern people (H. sapiens) who have migrated from southern latitudes—and are more likely to have a darker skin colour—to more northern latitudes show a higher incidence of tuberculosis, and this appears to be linked to an inability to synthesis enough vitamin D.

After a presumably dark-skinned population of Homo erectus had migrated north, this individual male in western Turkey was unable to generate enough vitamin D from the reduced sunlight, and a tuberculosis infection proved fatal.   If more skulls are studied then perhaps more lesions will be found and this could give scientists an insight into the speed of the H. erectus migration.

The paper on this unusual discovery has been published today in the American Journal of Physical Anthropology.