The Butchers of Boxgrove

The Butchers of Boxgrove

Not far from the location of one of the greatest anthropological hoaxes of all time, the Piltdown Man, lies Boxgrove quarry.  This site in picturesque, rural West Sussex provides evidence of the earliest known residents of the United Kingdom, some of the very first Europeans.  The gravel quarry reveals a chalk cliff and a bedding plane that represents an ancient beach.  Around 500,000 years ago this location was the gathering place for a group of Homo heidelbergensis as they butchered and processed the big game that they had brought down after a successful hunt. 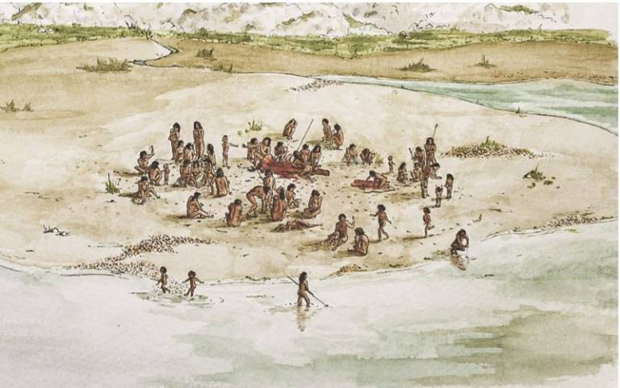 An artist’s impression of the social event of butchering the horse.

The book documents the activities and movements of a group of early Britons (H. heidelbergensis) as they knapped flints to make stone tools, modified bones to make implements and butchered a horse around 480,000 years ago or thereabouts.

“This was an exceptionally rare opportunity to examine a site pretty much as it had been left behind by an extinct population, after they had gathered to totally process the carcass of a dead horse on the edge of a coastal marshland” For over a decade from the 1980s and into the 1990s, a dedicated team of volunteers and archaeologists led by Mark Roberts (Institute of Archaeology) uncovered a treasure trove of prehistoric remains, that permitted the researchers to document the activities of these ancient people.   More than 2,000 sharp flint fragments were recovered from eight separate areas, known as knapping scatters.  These are individual workstations where humans knelt to make tools and left behind a concentrations of flint fragments.  In some places the impression made by the worker’s knees as they knelt on the sand can still be seen. At one location, the “flint shadow” of a man has been preserved.  The outline of his legs, as he sat, perhaps all day making tools and relentlessly flaking away at the flint, so that a shower of tiny fragments fell on him and around him, leaving a stencil impression of his limbs on the ground.

” The communal activity recorded at Boxgrove, where a number of large animals were skilfully cut up, their bones broken and the marrow removed suggests a very high degree of co-ordination and co-operation.  Everything in this behaviour indicates planning and a need to communicate, this suggests that Homo heidelbergensis was using a language to explain abstract concepts, organise work and to exchange ideas.”

Everything Dinosaur acknowledges a media release from the University College London in the compilation of this article.