They may have been delayed but in just a few days time Royal Mail will unleash a set of commemorative stamps celebrating two hundred years of prehistoric animal studies in the United Kingdom.  Ten first class stamps are being introduced on Thursday October 10th featuring Mesozoic creatures whose fossilised remains are associated with strata found within the UK.  The stamps which showcase the artwork of that renowned palaeo-artist John Sibbick have been designed to show some of the animals “breaking out” from their self adhesive stamp frames.  The stamps have been produced under the guidance of palaeontologists from the Natural History Museum, including the wonderful Angela Milner, Dr Milner, along with Alan Charig, her colleague at the Natural History Museum (London), named and described Baryonyx, one of the dinosaurs featured in the set. A set of first class stamps.

When asked about the release of these new first class stamps, Andrew Hammond, Director of Stamps and Collectibles, Royal Mail, stated:

“Britain has played an important role in the discovery of dinosaurs for over 200 years and our Dinosaurs issue is a fitting tribute to these creatures.”

The list of extinct animals portrayed is as follows: Baryonyx, Polacanthus, Iguanodon, Cetiosaurus, Megalosaurus and Hypsilophodon.  These six are dinosaurs, the other four remaining stamps feature reptiles but certainly not members of the Dinosauria.  There are two marine reptiles Ichthyosaurus and the long-necked Plesiosaurus. There are also two pterosaurs (flying reptiles) depicted, Dimorphodon and the much later and larger Ornithocheirus.

19th and 20th Century academics and scientists based in the United Kingdom have made significant contributions to the nascent branches of the Earth sciences now known as palaeontology and geology.  We at Everything Dinosaur are delighted to see such wonderful extinct animals such as the armoured Polacanthus and the mighty long-necked Cetiosaurus featured on a set of stamps.

Iguanodon and the “Whale Lizard” Cetiosaurus are Featured However, we do take issue with some of the inaccuracies regarding the prehistoric animals featured that have been included in various press releases and web sites from Royal Mail.   We at Everything Dinosaur, have pointed out that it is not appropriate to call this stamp set “British Dinosaurs”.  It could be argued that a number of the animals featured are associated with fossil remains found elsewhere within Europe as well as the United Kingdom, but our main bugbear lies in the fact that 40% of the set are not actually dinosaurs.  Yet these stamps are being constantly referred to as “British Dinosaurs” or “Dinosaur Stamps”, these titles are inaccurate.

The stamp set was originally scheduled for release last year, to mark the centenary of the publication of  “The Lost World”, a novel by Sir Arthur Conan Doyle that tells the story of an exhibition to South America  led by Professor Challenger that discovers a whole host of prehistoric animals surviving on a remote plateau.  Ironically, a number of animals featured on the stamps such as the Iguanodon along with the pterosaur Dimorphodon and the marine reptiles are featured in this book. 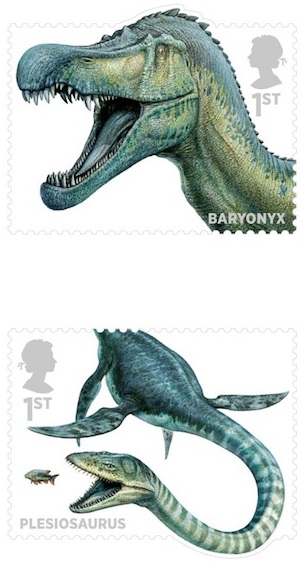 The South American spinosaurid Irritator, a dinosaur from the same branch of the Theropoda family tree as Baryonyx has a link to Sir Arthur Conan Doyle’s novel.  The specific name for Irritator (Irritator challengeri) is a reference to Professor Challenger, the central character in the book. Some of the information that accompanies images of these ten stamps that we have viewed on various websites and other media, including those under the domain of Royal Mail contain other factual errors.  For example, in the information surrounding the Baryonyx stamp it is claimed that this animals was named and scientifically described in 1987,  however, we at Everything Dinosaur have always believed that this dinosaur was named and described a year earlier.

Ichthyosaurs Make a Splash Along with Hypsilophodon 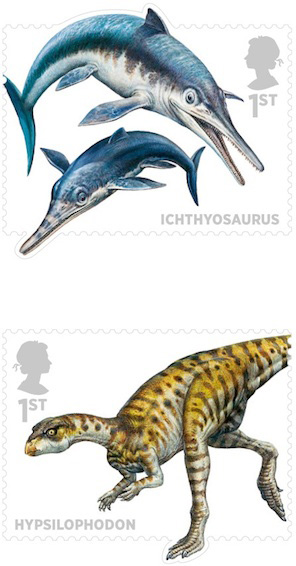 The final pair of stamps we are going to illustrate on this blog posting features the fearsome carnivore Megalosaurus and the Early Cretaceous pterosaur called Ornithocheirus.  All these stamps will be available later on this week along with souvenir collectors packs, a wall chart and other items marking our continuing fascination with all things prehistoric. These stamps are worth collecting not least because of  Mr Sibbick’s beautiful artwork.

“It is disappointing to note some of the misleading statements that have been made in association with these fine stamps.  Ironically, our experts at Everything Dinosaur have researched and written a fact sheet on all of the prehistoric animals featured in this set.  Perhaps, we can assist philatelists who want to get a little more information on these wonderful Mesozoic creatures.”